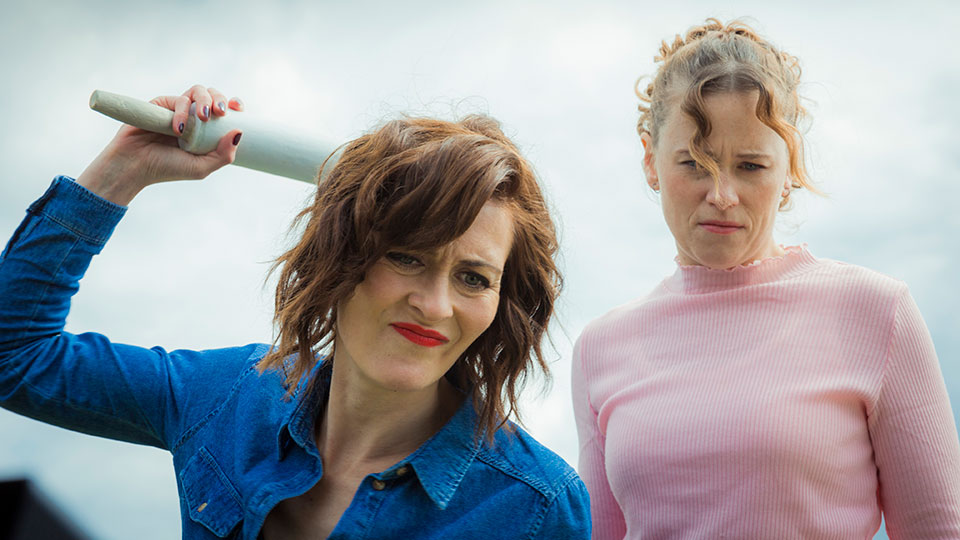 Self-help addict Lou (Katie Brayben) lives at home with her overbearing mother and lacks the confidence to break out on her own. A chance meeting with Val (Poppy Roe) sees Lou finally feel empowered and she agrees to go on a trip with her. Unbeknownst to Lou, Val is a serial killer and she’s taking her along to be an unwitting accomplice on her murder spree. Can Lou save herself and put a stop to Val’s murderous instincts… and does she even want to?

A Serial Killer’s Guide to Life is part of the First Blood strand at Arrow Video FrightFest and it’s the feature debut of British film-maker Staten Cousins-Roe. Paying homage to the female buddy classic Thelma and Louise, the film is a darkly humorous adventure that pokes fun at the wealth of self-help on offer in the modern world while telling the story of a woman that’s desperately in need of empowering. Lou is drawn to Val’s confidence and bold demeanour, and her lack of social skills means she doesn’t question why her new friend has taken such an interest in her.

It’s not hard to see why Lou wants to escape from her life. At the beck and call of her demanding, and mean, mother and constantly bending over backwards for everyone else, Lou goes on a much bigger journey than she expects when she impulsively accepts Val’s invitation to go on a trip with her. The lure of meeting her idol, self-help guru Chuck Knoah (Ben Lloyd-Hughes) is enough to win her interest and turn a blind-eye to what Val is doing.

Inevitably Lou finds out that Val is a serial killer and it’s at that point, for me, that the film really got interesting. The meek-and-mild Lou reacts in a surprising way and you find yourself wondering if she’s easily manipulated or just getting an opportunity to unleash her own anger and frustration in a very violent way. The plot hurtles along at a fairly rapid pace so there’s no time for you to get bored or lose interest along the way.

Katie Bryaben and Poppy Roe are brilliant together. Brayben really plays with Lou’s innocent naivety while Roe is wonderfully funny delivering deadpan lines with real panache. The two actresses play off one another and their bond is what really elevates the film. Where perhaps it falls down a little bit is that you don’t really see much of the violence unfold, with most of it happening off screen. The pace is also so zippy, I think it loses some of the character development that could have made this film even stronger.

A Serial Killer’s Guide to Life is a solid debut feature. It packs humour in its sharp script and Cousins-Roe’s direction is impressive. He gets wonderful performances from his leads and he understands how to balance violence and humour in his script. The film is certainly strong enough to put him on the map in the genre and it’ll be interesting to see what he does for his next project.