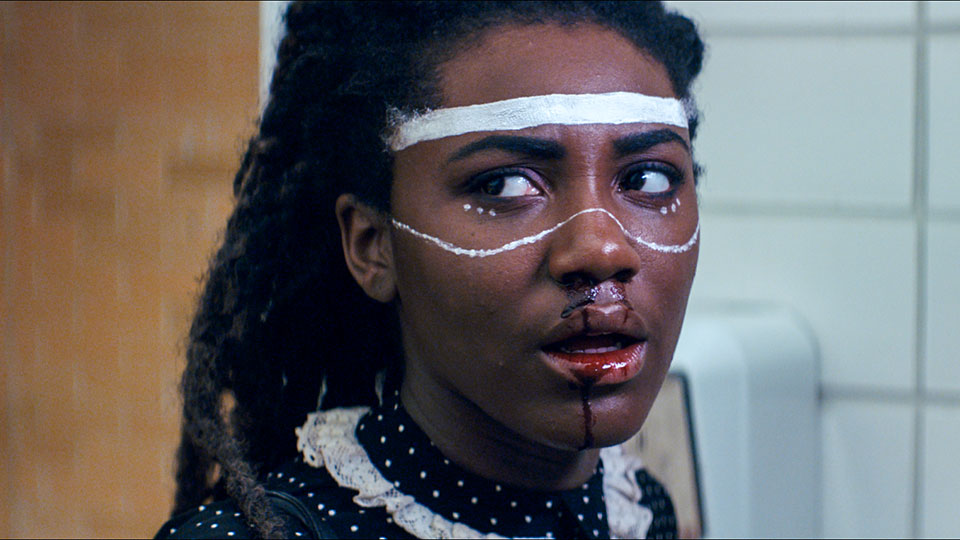 Carolyn Harper (Raven Whitley) isn’t the most popular student in the school but she has a reputation with the boys for being easy. Following a disastrous hook-up with classmate Andy (Ty Olwin), Carolyn is ditched next to a lake with a head injury after she changes her mind about having sex with him while they’re making out. While Andy returns home safely, Carolyn disappears leaving her classmates and their parents to wonder what happened to her.

Knives and Skin is from writer/director Jennifer Reeder and before the film began, we were warned that it’s a genre film rather than a horror. Taking inspiration from the likes of Heathers and Mean Girls but with more style, Knives and Skin is the kind of film that will likely divide audiences. The mystery of Carolyn’s whereabouts is actually not really what the film is about at all. It’s more to do with how her disappearance affects the disenchanted friends she went to school with and their dysfunctional parents.

While Carolyn’s mother Lisa (Marika Engelhardt) displays increasing more bizarre behaviour as she grieves, Carolyn’s peers explore the misery of their own lives. Andy’s sister Joanna (Grace Smith) tries to ignore her mother’s battle with mental illness and spends her time selling used underwear to her teachers, whereas Laurel (Kayla Carter) and Charlotte (Ireon Roach) explore their sexuality and identity respectively. The kids may be messes but they’re nothing compared to their parents who are engaged in affairs, lies and plenty of deception.

The plot and dialogue isn’t likely to connect with everyone. The film is pretty bleak and the scenes are sometimes fairly stilted. Reeder makes fantastic use of colour and light, and the costumes are eye-catching, but the odd way the narrative unfolds may leave some cold. For example there are moments where the cast start singing for no rhyme or reason and none of the characters behaves in a way that most audiences would be able to relate to.

The performances are good across the board. Marika Engelhardt’s portrayal of grieving Lisa is particularly affecting as she veers from sadness to full-out crazy while trying to find out what’s happened to her daughter. The trio of Grace Smith, Kayla Carter and Ireon Roach are solid too, giving performances beyond their years and delivering some pretty mature dialogue in a convincing way.

Personally Knives and Skin is just not my kind of film. The arthouse feel and arbitrary flow of the narrative did nothing for me. I could appreciate it’s well-written, well-acted and it looks visually interesting but I struggled to really root for any of the characters. That left me feeling a bit outside of the story and the quirky nature of the film, mixed with the dour feel it gives, left me wanting more. See it and make up your own mind, you may feel very differently to me, and some people in the audience today certainly did.