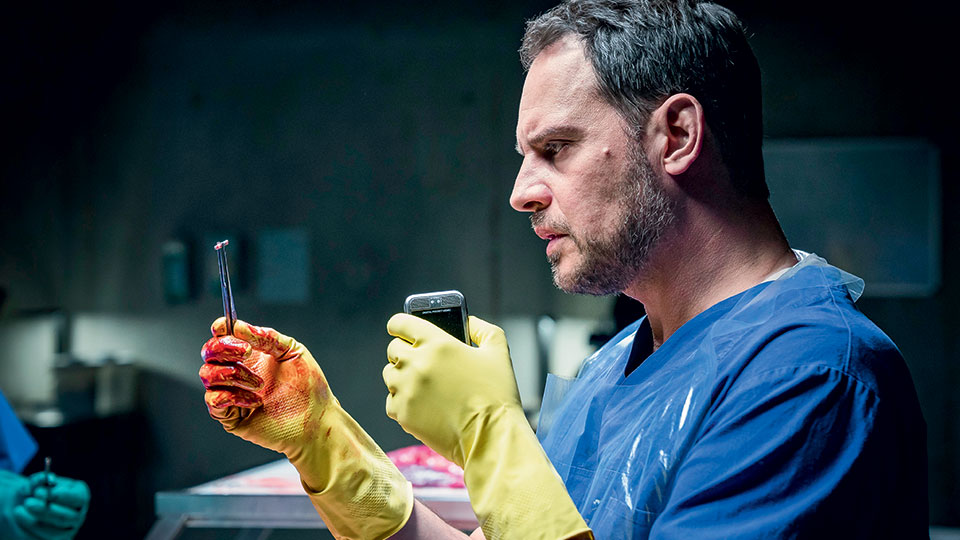 Coroner Paul Herzfeld (Moritz Bleibtreu) discovers a capsule in a body that contains his daughter’s name and her phone number. When he calls it she answers and warns him that someone called Erik (Lars Eidinger) is watching his every move but will be leaving clues for him to follow. As Paul starts to put the pieces together, he gets assistance from Linda (Jasna Fritzi Bauer), a girl he’s never met but who answers a phone, which is one of the clues left for Paul. Stranded on Heligoland in a storm, Linda follows Paul’s instructions as he tries to get to her and find his daughter.

Written and directed by Christian Alvart, Cut Off is an absolute nail-biting suspense thriller that’s as intense as it is stomach-churningly gory. Like any good mystery, the film has you second guessing everything you see on screen and you’re suspicious of every single character. The film opens well with the audience introduced to Linda before they meet Paul and it takes a little while for the two characters to be connected. That’s not a problem though as you’ll be gripped within minutes.

Once Paul realises that his daughter has been kidnapped, the film ramps up the intensity. Paul is aided by his wannabe intern Ingolf (Enno Hesse) while Linda finds assistance from a friend of Paul’s Ender (Fahri Yardim), a janitor at the morgue on the island where Linda is hiding from an abusive ex-boyfriend. There are some really clever moments that take place via phone as Paul has to guide Linda outside of her comfort zone to help find the next clue. This is definitely not a film you want to watch while you’re eating anything as it is seriously stomach-churning at times.

The pace is fast despite the lengthy run-time and my only criticism is that the final twist is perhaps one too many. It didn’t particularly bother me but I did hear an audible sigh from some members of the audience. Until that point the film had been outlandish at times but always in the realm of realistic.

Moritz Bleibtreu is a brilliant leading man and his scenes with Enno Hesse are brilliant. The two characters are polar opposites but they’re forced to form a fast-friendship in order to find Paul’s daughter. The star of the film though is Jasna Fritzi Bauer who puts in a real star-making turn. She’s brilliant, delivering sarcastic humour in the darkest of moments. Her interactions with Bleibtreu’s Paul, even though over the phone, are the best in the film.

A mention must go to Lars Eidinger too who is perhaps the creepiest villain I’ve seen in a horror film for some time. He’s truly frightening and scarily believable in his portrayal of Erik. The darker scenes in the film are hard to watch, largely because he is terrifying.

Cut Off was a surprise for me. I didn’t expect to be gripped in the way that I was. If you think of a more fast-paced Girl With the Dragon Tattoo, that takes less obvious twists, then that’s pretty much what this film is. I could see it going on to be a series and I’d definitely be happy to see Paul and Linda working together on the big screen again. Cut Off is a pure rush from start to finish.