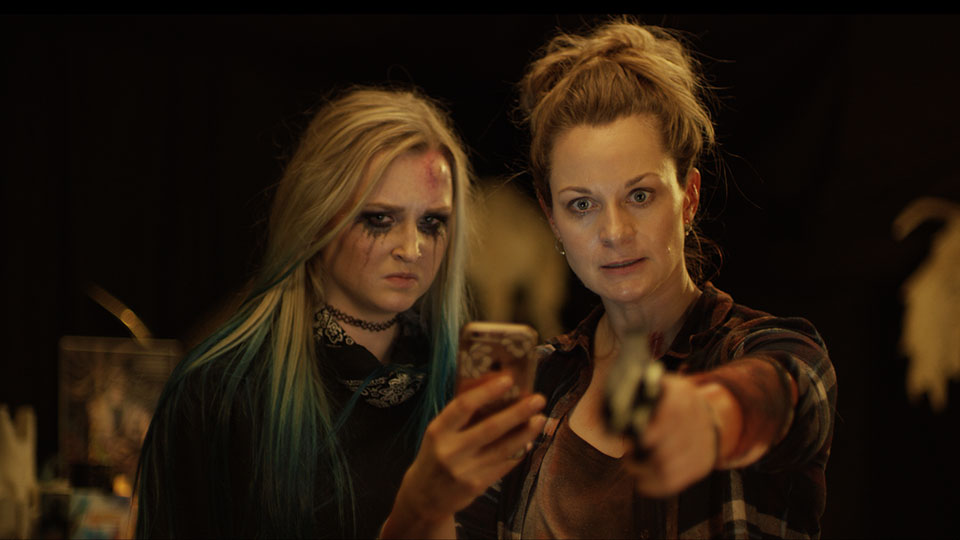 Melanie Edwards (Dawn Van de Schoot) moves into a quiet suburban neighbourhood with her kids Madison (Hailey Foss) and Timothy (Kaeleb Zain Gartner). As they settle into their peaceful new home, the family is alarmed to receive individual letters instructing them to kill people in the neighbourhood before the would-be victims hunt them down and kill them. Initially dismissing the letters as an elaborate prank, the family realise it’s no laughing matter and they have to fight to stay alive.

Canadian film-maker Cameron Macgowan makes his feature film directorial debut with Red Letter Day. A horror comedy, the film definitely owes plenty to The Purge series as it asks the question what would you do if you could kill someone and get away with it? While The Purge sees the havoc all take place over one day annually, Red Letter Day unravels a tale of chaos and paranoia on the very first Red Letter Day. No one in the neighbourhood knows how to react to the letters and even those who have been given close friends as their potential victim, behave nervously not knowing if a fight to the death might be on the cards.

In theory Red Letter Day could be completely avoided by people just refusing to kill their target. That would bring the whole thing to an end very quickly but the film leans into the dark nature that resides in many people, showing that if people are given the chance to do something they wouldn’t ordinarily, a percentage of them are going to go through with it. It’s a terrifying thought and one that’ll definitely make me think twice before I piss off the neighbours in the future.

What Red Letter Day does so perfectly is balance the absurdity of the situation with comedy. While the movie isn’t exactly laugh-out-loud, there are some very sharp lines and the cast play their characters on the right side of unlikely situation. One scene early on sees Melanie visit her friend Alice (Arielle Rombough), who is the person she’s supposed to kill. She arrives at the house with no intention of doing anything other than talking it out with her friend but that quickly goes sideways when paranoia on both sides get the better of the two women. It’s a brilliant, brilliant scene and sets the tone for the rest of the film.

Dawn Van de Schoot makes for a fantastic leading lady and she reminded me a bit of Laura Linney throughout. She brings the right amount of motherly outrage and feisty badass to the role, and you root for her from the first scene. After all, Melanie is a woman who’s trying her best to protect her children and who doesn’t admire that? Of the kids Kaeleb Zain Gartner gets the most to do and he brings plenty of humour to the film. He’s a lot of fun to watch and you genuinely care about the character.

While the premise may not be wholly original, Red Letter Day is a real hoot of a film. It zips by at a lively pace, will make you laugh and delivers some surprising violence. The film never takes itself too seriously and that definitely works in its favour. Macgowan directs with plenty of flair and his script never lulls so I’d say based off this, he’s got a very promising career ahead of him in this genre.