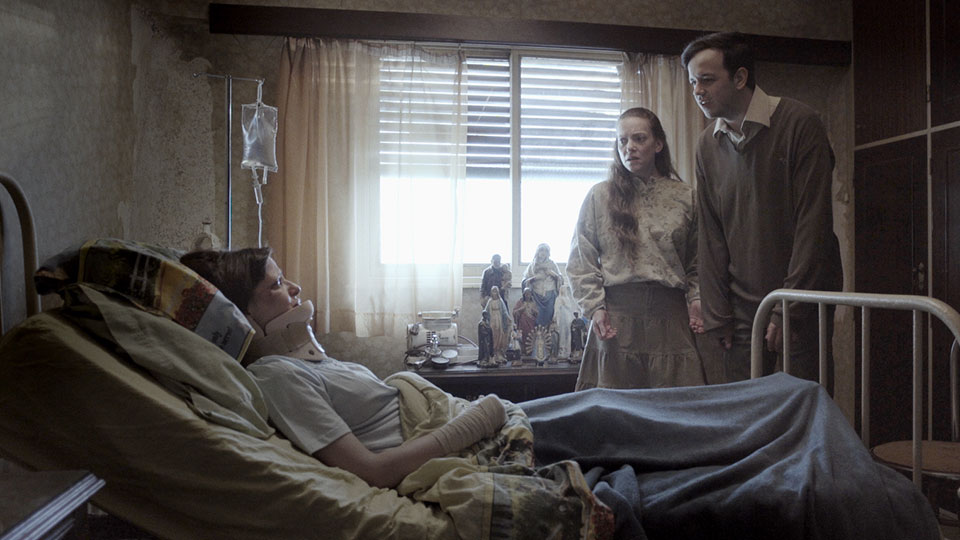 Jesús (Pablo Sigal) and his sister Maria José (Valeria Giorcelli) live together in the house that belonged to their late father. Content with each other’s company and used to being on their own, the siblings are surprised when their half-sister Magdalena (Agustina Cerviño) unexpectedly turns up from Spain. Once the initial pleasantries are out of the way, Magdalena wants to know what her share of the inheritance is but a nasty accident leaves her trapped in the house with her siblings.

Rock, Paper and Scissors is from directors Macarena García Lenzi and Martin Blousson, and it’s a classic slow-burn psychological thriller. Not dissimilar in tone, and creepiness, to Stephen King’s iconic Misery, the film pits three siblings against one another and keeps the viewer guessing as to who the real antagonist is. With elements of Whatever Happened to Baby Jane? permeating through the narrative, Rock, Paper and Scissors doesn’t take too many turns that you won’t expect if you’re familiar with this kind of premise.

What the film does well is gradually turn up the tension as the siblings use one another to try and gain the upper hand. It’s quite difficult to figure out, at least initially, who you should put your trust in and the film isn’t in any particular rush to help you out with that. The performances of the three leads draw you in, particularly Valeria Giorcelli, who plays The Wizard of Oz obsessed Maria José. Her performance is so wonderfully wacky that you’ll be trying to guess if she’s unhinged or just very kooky.

Agustina Cerviño plays Magdalena a lot straighter and her expressions are sometimes priceless as she watches her brother and sister go about their normal day. The trio is completed by an unnerving performance from Pablo Sigal as Jesús the sibling who may, or may not, actually have it together. I don’t want to go any further into the dynamic as it would ruin the film for you.

What the film doesn’t quite get right is when to deliver the plot twists. I felt everything was left to the last minute to unfold, which was a shame. Of the 83 minutes, the first 70 are essentially build-up so when you get to the final act, it’s over before you’ve had chance to lose yourself in it. I don’t feel the film needed to be longer, it should have just started its denouement a bit earlier.

Rock, Paper and Scissors is a perfectly serviceable thriller with strong lead performances. The limited locations and intrusive camera angles, help to convey the feeling of being trapped but the overall plot is just that little bit too familiar to fully deliver. With its pacing problems thrown into the mix, Rock, Paper and Scissors doesn’t quite pack the punch you think it will but it doesn’t outstay its welcome either. A solid effort but not one that’s going to leave a lasting impression.