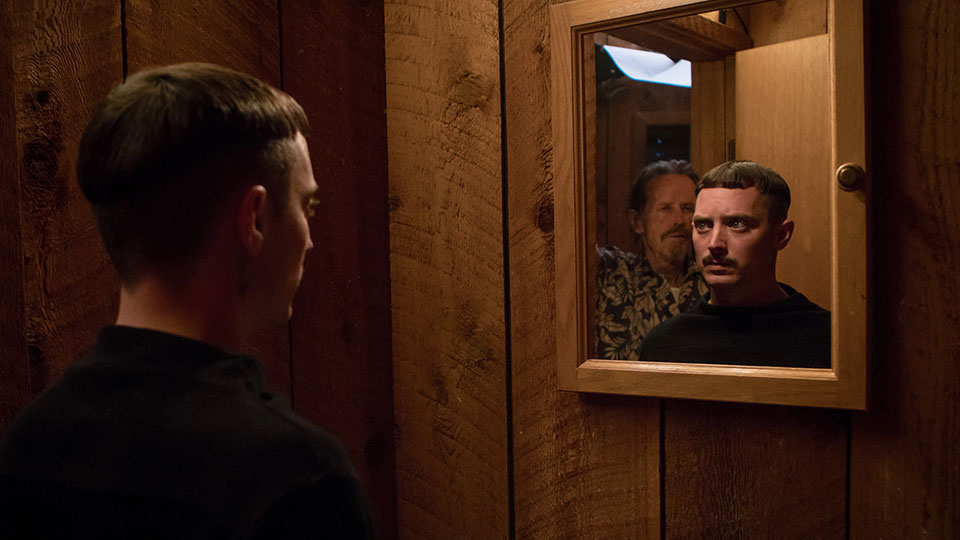 Aspiring artist Norval (Elijah Wood) decides to go and visit his estranged father after unexpectedly receiving a letter from him. Arriving at his father’s isolated house, Norval attempts to reconnect with him and get answers to questions that have bothered him since he was abandoned as a child. What begins as a tense evening soon takes an unexpected turn and Norval is thrown into the middle of a confusing nightmare as tensions bubble to the surface.

Come to Daddy is the feature film debut of director Ant Timpson and is based on an idea he came up with. Deliberately odd in tone, Come to Daddy attempts to keep you guessing and throw you off track, and it succeeds brilliant. Adapting a wonderfully zany tone that contrasts with the more gruesome elements of the film, it’s unlike anything you’ll have seen before despite all of the clear references to Alfred Hitchcock’s iconic film Psycho.

The first half an hour of the film is fantastic as Norval nervously arrives at his father’s house to discover that the man he can barely remember is now a full-time alcoholic. Not only that but he’s keen to put his son down at every opportunity, mocking him for everything ranging from his fashion sense to his career aspirations. It’s actually slightly uncomfortable viewing, especially for anyone who grew up with an absent father.

What Come to Daddy does so brilliantly is constantly challenge your expectations. You’ll think the film is going in one direction, then it reveals your hand and it does something quite different. It’s also very, very funny. The dialogue is razor sharp and the performances of the cast deliberately lean into the comedy aspect of the screenplay.

At the centre of it all is Elijah Wood who has made some brilliant leftfield choices with his career since hitting the big time as a child star. He continues to evolve here as a compelling actor able to showcase his versatility and tackle challenging material. Wood is perfect as Norval and this could be one of his best performances to date. The direction from Timpson should also be mentioned as it’s nothing short of masterful. He uses his cast and locations incredibly well, and brings a zippy flair that you don’t often find in horror films.

Come to Daddy is the kind of film that will take people by surprise. It was the perfect choice to open this year’s Arrow Video FrightFest and it sets a high bar for what’s to come over the next 5 days. Kooky, entertaining, compelling, gripping and wildly creative, Come to Daddy is a real hoot and it’ll leave you sore from laughing so much as well as slightly horrified at what unfolds on the screen.