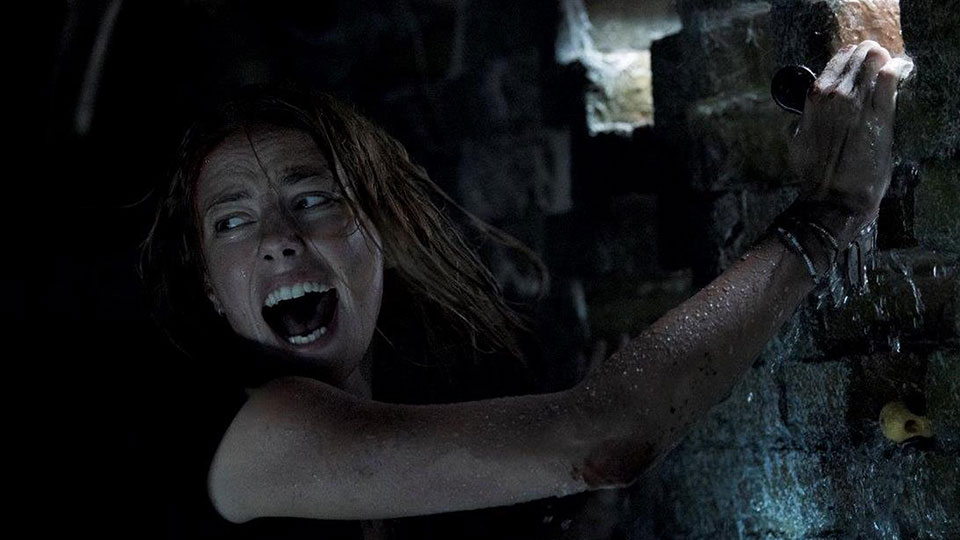 Swimmer Haley (Kaya Scodelario) receives a worried call from her sister about their father Dave (Barry Pepper) following a training session. Despite a hurricane blowing up outside, Haley decides to drive her car over to her father’s condo to check on him. When she arrives he’s not there so she tries the family home, which is being sold following her parents’ impending divorce. As the storm worsens, Haley finds signs of her father at the house and ventures down into the crawl space where she finds him unconscious and injured. As she tries to get him to safety, an alligator appears and she realises they are going to have to fight for their lives.

Crawl is the new film from horror maestro Alexandre Aja (the film-maker behind The Hills Have Eyes remake) and it’s a good old-fashioned creature feature. Designed for maximum intensity and to make you jump, a lot, Crawl is a claustrophobic experience that will have those with a fear of both alligators and water on edge. Once the scene setting is out of the way, Crawl is an intense ride and it doesn’t waste any of its 87 minutes.

With only two main characters, a lot of Crawl takes place in the crawl space under Haley’s family home as she and her father attempt to navigate their way to safety, avoiding being attacked by alligators. There are plenty of jump scares, which I have to say are very effective, and the tension will have you digging your nails into your seat. As you’d expect from this kind of film, it gets a little silly but as the situation escalates, it gets more-and-more fun. I was drawn in from start to finish and the film reminded me of when creature feature didn’t try to be clever and just entertained.

Kaya Scodelario has come a long way since her Skins days and she proves she can more than carry a film with Crawl. She plays Haley as strong and intelligent, and she’s very much in control for the duration of the film. Even when the situation looks incredibly dire, Haley uses her wits, and of course her swimming training, to keep one step ahead of the alligators. Barry Pepper is good too as her father Dave and while he doesn’t have as much to do as Scodelario, he still gives a memorable performance.

Visually Crawl is impressive too. Most of the film was done on soundstages against green screen but it looks very good. The alligators are brought to life convincingly and they look incredibly lifelike most of the time. There’s plenty of blood and limbs being pulled from bodies so horror fans will definitely find plenty to enjoy here.

Crawl is exactly what it promises to be – a tense, silly and entertaining creature feature with Aja’s exquisite direction and Scodelario’s superb performance elevating it. It’s not going to win loads of awards or break any new ground but it’s not supposed to. What it will do is give you a bloody (pun intended) good night out at the cinema and you’ll jump out of your skin plenty of times too. Sounds like the perfect horror movie night out to me.