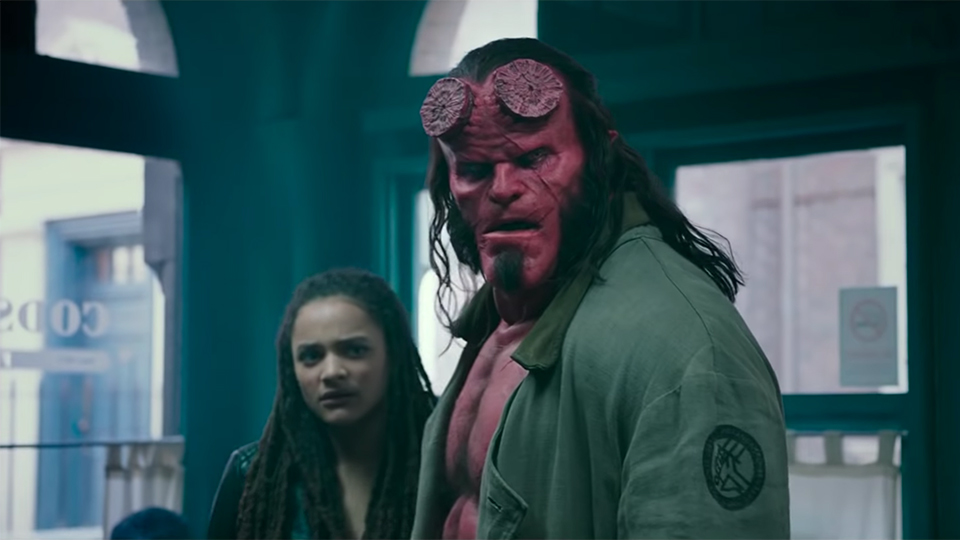 After time was needlessly called on a fan-demanded third instalment of Guillermo Del Toro’s incarnation of Hellboy, we now find ourselves with a rebooted version. With a screenplay from Andrew Cosby and with the blessing of Hellboy creator Mike Mignola, this new version manages to undo a lot of the goodwill built up from the Ron Perlman movies and instead trades on big set-pieces and underwhelming effects-heavy mayhem. With director Neil Marshall onboard I figured this would do the basics right, and it does to some degree, but the disjointed narrative mixed in with some very poor CGI renders this a real missed opportunity.

The plot finds Hellboy (this time around played by Stranger Things legend David Harbour) called to a job by his surrogate father Professor Broom (Ian McShane). There’s an ancient sorceress named Nimue (Milla Jovovich) who is hell-bent on raising monsters and reclaiming the planet with a new age of darkness. Known as The Blood Queen, it seems that she was always destined for this path. She was once defeated by none other than King Arthur, with her dismembered (but still alive) body placed in numerous boxes protected by magic and scattered across the country. Now someone is trying to bring the boxes back together so it’s up to Hellboy to stop her from destroying humankind.

The plot has a semblance of intrigue but it’s handled poorly right from the start. From the offset you really notice how this new version has sacrificed the nuance of proper characterisation (something so prevalent in the Del Toro movies) for quick quips and silly set-pieces. At this point it’s worth mentioning that David Harbour does exceptionally well here. He has a very tough task following up from Ron Perlman but he brings his A-game to the role and is by far the best thing in this movie. It’s such a shame the material didn’t do his performance justice, because he tries very hard here and deserved a lot better.

Actually, the same can be said for a few of the cast. Ian McShane frequently steals his scenes in any movie and that trend heartily continues here. He shares a great chemistry with Harbour and the two do explore the father-son dynamic of Hellboy and Broom quite well given the circumstances. After an impressive debut in 2016’s American Honey, Sasha Lane tries hard to transcend her shoddy dialogue as Alice, a psychic aide to Hellboy. Again, she shares a good rapport with Harbour, but the script always keeps things basic and never threatens to scratch the surface of their interesting past. It was nice to see Thomas Haden Church in a bizarre cameo as Lobster Johnson too.

I’m a big fan of Daniel Dae Kim but his British accent is atrocious here. I tried to cut the guy some slack but it just got worse as the film went on. I really tried to ignore it but it got to a point where it was affecting the film negatively. His role as shadowy black ops agent Major Ben Daimio didn’t help him either, with it being really poorly fleshed out and not affording an actor of his talents any opportunity to really make the role his own. The brilliant Stephen Graham is wasted too as he voices a GCI monstrosity named Gruagach – one of the Blood Queen’s henchmen that just looks like a poorly rendered rip-off version of Bebop from the Teenage Mutant Ninja Turtles. Milla Jovovich is largely unremarkable as Nimue and it feels like she shot all of her scenes via Skype.

I’ve never seen a film sway so wildly between solid and shocking CGI. There are some truly great visual treats to be found in Hellboy… and that really should have been the benchmark for the whole movie. But for every good piece of CGI, there’s 3 terrible ones too. The bad sadly outweighs the good by quite a big margin at end of the film and just leaves you wondering what could have been. Director Neil Marshall has made a lot of good films, with Dog Soldiers and The Descent particular career highlights. It’s a shame Hellboy won’t be joining his greatest hits because whilst the film has scope, it never gives you a good sense of suspense or high stakes. This has to be the fault of the script, which doesn’t let us get close to any of the characters and that is perfectly happy to coast from one set-piece to the other.

The Blu-ray and 4K Ultra HD versions of Hellboy come with a 3-part documentary called ‘Tales of the Wild Hunt: Hellboy Reborn’, some deleted scenes and a Previsualisation. There are two Steelbook versions too, with a Zavvi exclusive art-cover and a slipcase edition that comes in nice packaging, has the same art-cover Steelbook and also art-cards included.

I wanted to love Hellboy but it’s very disheartening to see it so poorly handled here. The saddest thing is that there was scope here to make something memorable, but the filmmakers seem to have opted for the quick-win at the expense of an engaging story and rounded characters. There’s fun to be had in pockets, but on the whole Hellboy is a big disappointment given its potential, and just makes you wonder what a third Del Toro movie would have looked like.