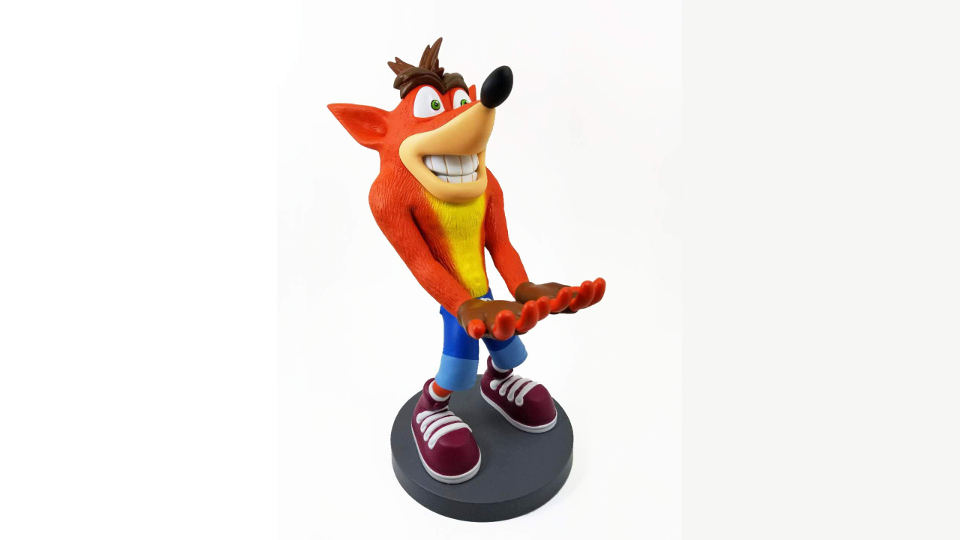 As excited as I am to play my favourite games with all my favourite characters, I absolutely go bonkers for the opportunity to have said characters sit next to me in all their plastic glory. Still flying high from the Crash Bandicoot hype, I’m more than happy to throw my money (queue the ‘Take my money Fry’ meme here!) at anything Bandicoot shaped. Being an adult does have it’s perks sometimes, and if I want a XL Crash Bandicoot device holder, then bygunnit, that’s what we’ll have!

Impressively living up to the XL name, the Crash Bandcoot device holder stands at around 12″ tall and can hold anything from your Nintendo Switch, to the remote control. I did find it to be a challenge getting him to hold my Xbox 360 controller when it had the add-on battery pack. However, my kid and I spent a good long while just looking around the house to stuff in Crash’s hands–have you seen his ear to ear grin? He’s thrilled to be a Bandicoot-shaped Atlas!

He comes with a tidy 2m long USB cable with two fittings, so looking good isn’t just his purpose, but also charging your devices in the process. What a helpful chap! Cable Guys aren’t new to the controller holding rodeo either–their website offers some awesome variations, including Sonic the Hedgehog, Spyro the Dragon and Deadpool–all 100% licensed too! The quality is solid as well, with a paint job worthy of a Wumpa Cup champion, and sturdy hands fixed in place so there’s no threat of swinging arms dropping your devices. The stand also is firmly balanced, so no tipping over will be had!

Cable Guys also offer a smaller version of the XL Crash Bandicoot holder, coming in at about 8″, to fit any desk space or lifestyle, and other variations like the Aku Aku Crash Bandicoot where he dons the wonderfully mad invincibility mask. To me, there’s nothing cooler than having that giant goofy face stare back at me, and with a cheesy grin like that I’m tempted to make him my toothbrush holder!

Makes a wonderful gift for anyone N. Sane about Crash and lets you run wild with the possibilities for what he could be useful for! He’s also durable in his plastic exterior, so dropping him or bumping into him isn’t really an issue.

You can pick yours up today from numerous online outlets and physical stores for around £24.99* for the XL,–which I think is very good value taking the size, usefulness and collector’s itch into account. Now, it’s time for me to shuffle this little dude around the house and see how much stuff I can put in his Bandicoot hands!

*Note: Price point was retrieved from Amazon UK, as Cable Guys don’t sell directly from their website–retail prices may vary.