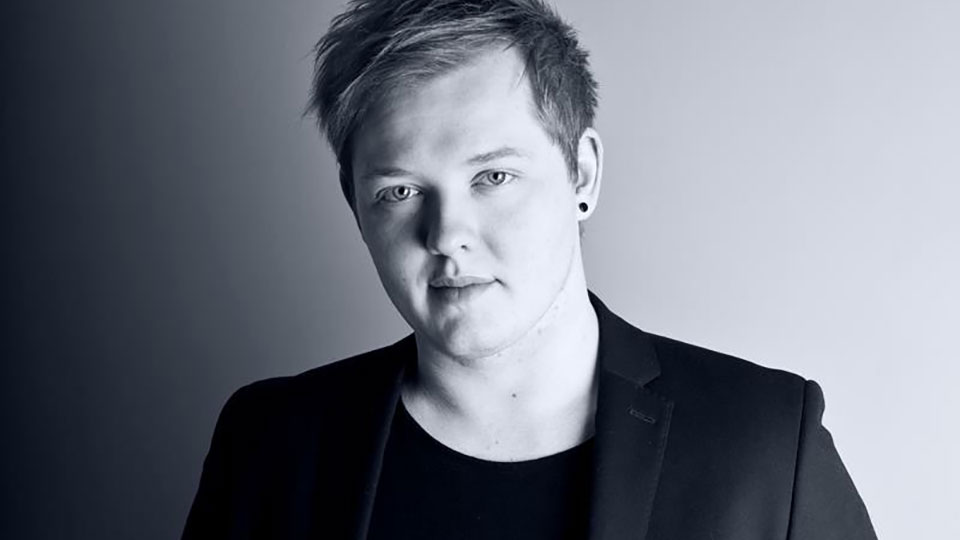 Film-maker Tom Paton is no stranger to Arrow Video FrightFest.

I caught up with Tom to talk about the film, find out how Shayne came to be involved, and to discuss the film-maker’s distinctive visual style…

Hi Tom. How are you and where does this email Q&A find you?

I’m really good thank you, definitely tired though after wrapping on my fifth feature film back in April. I’m deep in pre-production on my next film at the moment, so I’m currently on a steady diet of energy drinks and pep talks right now.

You’re back at Arrow Video FrightFest in August with your new film Stairs. What’s it all about?

It’s honestly such an honour to be back at FrightFest for my third year in a row, which is probably a bit of a rarity but I make films at such a furious rate that I’, very proud of that. The new film is my fourth feature called Stairs, which is about eight mercenaries that find themselves trapped on an enteral stairwell after a morally complex mission. They realise they are trapped in an eternally loop and must confront their past if they want to get off.

Where did the concept for the film come from?

Stairs is actually one of my longest gestating films conceptually. i think the first version of it I wrote in 2013, and originally didn’t feature any military elements. The idea was to always to create something that was visually very OTT and we always had this idea of Blue/Green/Red colour pallet through every version of the script. What I really wanted to do though was to create something that we could explore many different types of stories within, so hopefully if this first film is successful then it won’t be the last time we visit these particular stairs.

A few of the cast also starred in your last film Black Site but a notable new addition is Shayne Ward. How did you get him involved with the film and why did you decide to cast him?

I met Shayne via our wonderful casting director Michelle Holmes, who had worked with Shayne and his partner Sophie Austin (who is also in the movie) many times before. She recommended we sit down for lunch and I just felt like I’d met this guy with a huge amount of talent and eager to show the world just how far he could push himself as an actor. Shayne’s character in Stairs is so completely different from what his fans are expecting that I think people are going to be really shocked. He’s a great actor and, as you mentioned, I like working with people I click with on future stuff and Shayne is certainly one of them.

You clearly have a good relationship with the actors you work with. Does it make easier or harder to work with people you’ve worked with previously?

I think the interesting thing about film that is never really focused on much is just how collaborative it is. A movie has so many moving parts and potential road bumps that you become really bonded to the people that work with you and fight to get this collective vision to the screen, and those that battle you and make people’s lives hard for their own ego you avoid like the plague afterwards. The actors are the biggest part of that collaboration and when I find people that really become a team player then I stay loyal to them afterwards. I’m always meeting wonderful people and when that happens I want to bring them along on this bonkers journey I’ve found myself on.

I really loved the use of lighting in the film. It creates a distinctive visual style and atmosphere. Can you tell me how you came to make the choices you did?

Well thank you, we gave such a huge amount of thought to playing with this very stark RGB colour scheme. We knew it was a big risk, especially the day for night graphic novel look we deployed in the outdoor battle scenes, but it was important to the story that we tried to push things visually. George Burt is my long suffering Director Of Photography and we work very closely together to raise the overall look of the films and lighting is a huge part of that. We worked closely with a company called Rotolight on the movie, who were super supportive and who’s lighting really let us push the boundaries of what we were doing.

As always with your films, Stairs is very ambitious. What was your biggest challenge when making the film?

I honestly believe that filmmaking is one of the hardest things to do. My films and me as a director get a lot of flack for being too ambitious but from my perspective there’s no point in doing a film if it doesn’t really push you. I have nothing against more low key indie stuff but it’s just in my DNA to try and do the thing that everyone says I shouldn’t. Stairs was particularly a challenge because of how stylised it is. The choice to use this graphic novel style day for night look in sequences meant shooting everything over exposed and never really having a handle on the material we were shooting on set. Also the very nature of the script made keep track of all of the time loops a real challenge. I loved every minute of it though…maybe I’m a sadist!

There are lots of different genres that come together in Stairs including action, science-fiction and horror. How hard is it to balance all of those elements to deliver a cohesive and engaging film?

I think if you look back through all of my films, I’m always trying to blend genres together so nothing is ever really just one type of thing. That probably comes from growing up watching things like Buffy The Vampire Slayer, I’ve just always been in love with the idea of blending things together from different worlds that you wouldn’t always immediately put together. Stairs really runs with this and there is a lot of different tones and genres going on in there. I think I just try to stay true to the vision I have in my head and have faith that it’ll work. Admittedly, sometimes it’s worked out better than others but I kind of live for that experiment of making these ambitious but commercial films.

You’re already working on your fifth and sixth films. What can we expect from those?

So I’ve already wrapped on my fifth film called G-LOC, which is my biggest budget to date and stars Stephen Moyer (True Blood) and Casper Van Dien (Starship Troopers). It’s a space film with a lot of mythology building and some of my favourite characters to date. I’m really proud of the film and can’t wait for people to see it.

What do you hope that Arrow Video FrightFest fans take away from Stairs?

For me it’s always the same thing…even if people hate the films I make, as long as it gets them talking and engaging in a conversation rather than saying ‘meh” then I tend to be happy. I’m very proud of Stairs so hopefully it strikes a cord with some people and that helps spread the word.

Stairs will receive its World Premiere at Arrow Video FrightFest 2019 on Monday 26th August at 6.30pm in the Prince Charles Discovery One screen. For more information and tickets please visit http://www.frightfest.co.uk. Watch the trailer for Stairs below: