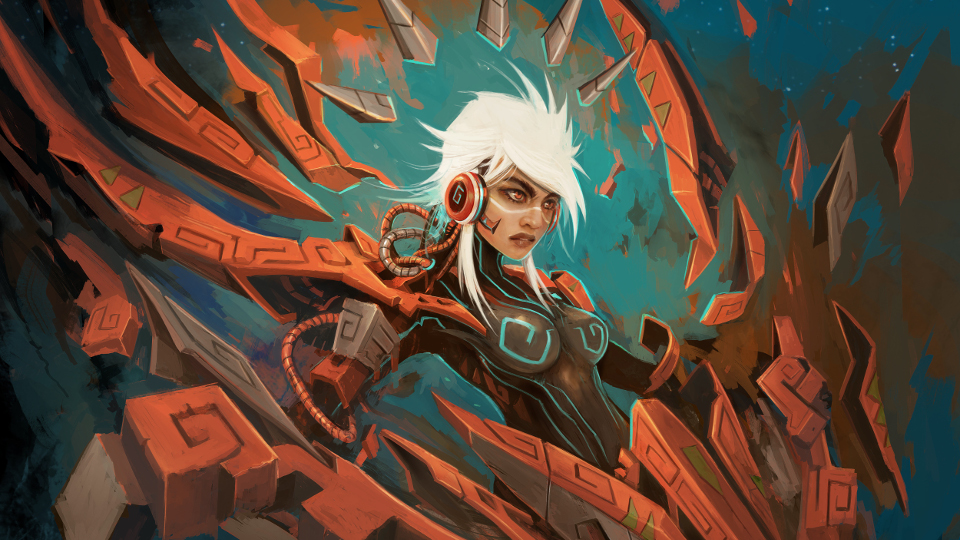 Pawarumi is a shoot ’em up created by French indie developer Manufacture 43. The game has actually been around on Steam for PC since early 2018 but has now made the jump to console. I’ve been checking out the game on Xbox One but it’s also available on Nintendo Switch.

In Pawarumi, the action is set in a futuristic universe with structures that are inspired by pre-Columbian architecture. Players take the role of a female pilot named Axo. She’s seeking revenge for some betrayal against the people of Earth. To do this she’s in control of Chukaru, a holy spaceship with unique abilities.

Watch the Pawarumi launch trailer below:

The game has three difficulties to choose from – Easy, Medium and Hard. Each has its own path through the game with a unique story and ending. As you’d expect the Easy path is the shortest and the game wants you to eventually complete it by finishing the Hard setting.

The basic gameplay is simple enough with the left-stick moving your ship and the face buttons firing your weapons. Enemies attack in waves and have distinct movement patterns and formations. The game flies you along a linear path through each level while you dodge the enemy bullets and return fire with your weapons.

This sounds straightforward enough, but there’s a twist called the Trinity Mechanic. It’s actually inspired by the classic Rock-Paper-Scissors game but here it uses the colours Red, Green and Blue. The Chukaru is equipped with three main weapons – Jaguar missiles are Red, Serpent bullets are Green and Condor lasers are Blue.

As you might have guessed, the enemies are also coloured Red, Green or Blue. The easiest way to play the game is to simply fire whatever weapon you wish whenever you like. This is a basic strategy but it works as all weapons can damage all enemies. To really play properly though takes a little time with the game to get your head around how everything works.

For the more advanced strategies things get a little more complicated. Shooting your weapons falls into one of three categories – Boost, Crush or Drain. These are shown across the bottom of the screen with Boost and Drain having their own meters. They also change colour to correspond to the weapon that you are firing.

Boost is the simplest to understand and requires you to shoot enemies with the weapon that matches their colour. So for example you’d shoot a green enemy with the Condor laser. Doing so recharges your Shield meter. The safest way to play is to ensure that you keep your shields topped up at all times.

Crush allows you to deal double damage to an enemy and works by Red beating Blue, Blue beating Green and Green beating Red. So for example to crush a Blue enemy you’d want to fire the Jaguar missiles. Finally, Drain works the opposite way round to Crush so Red beats Green, Green beats Blue and Blue beats Red. Draining enemies fills your Super meter and this can be done multiple times. Pressing the Y button performs a super attack which causes massive damage, wiping out small enemies and hurting larger ones.

Throughout your missions you also come up against large boss enemies. These are easily the highlight of the game and really test your skills. Overcoming them requires learning their attack patterns and different phases. Taking them down quickly requires you to have mastered the Trinity System so you can top up your shields and super attack at the right times as well as switching to Crush for the extra damage.

View some Pawarumi screenshots in our gallery:

Overall I enjoyed my time with Pawarumi and found it had that addictive ‘just one more go’ quality to the gameplay. It’s tough but fair and when you die you know it’s your own fault for either not moving quick enough or ensuring that you had sufficient shields in reserve. It’s a short game but there’s plenty of replay value if you enjoy score chasing to climb the leaderboards. There’s also a training mode to practice the stages you want to get better at. Anyone who enjoys bullet-hell shooters with a bit of thought behind them should check it out.

Pawarumi was reviewed using a digital code supplied by the publisher.

Advertisement. Scroll to continue reading.
In this article:Manufacture 43, Nintendo Switch, Pawarumi, Xbox One