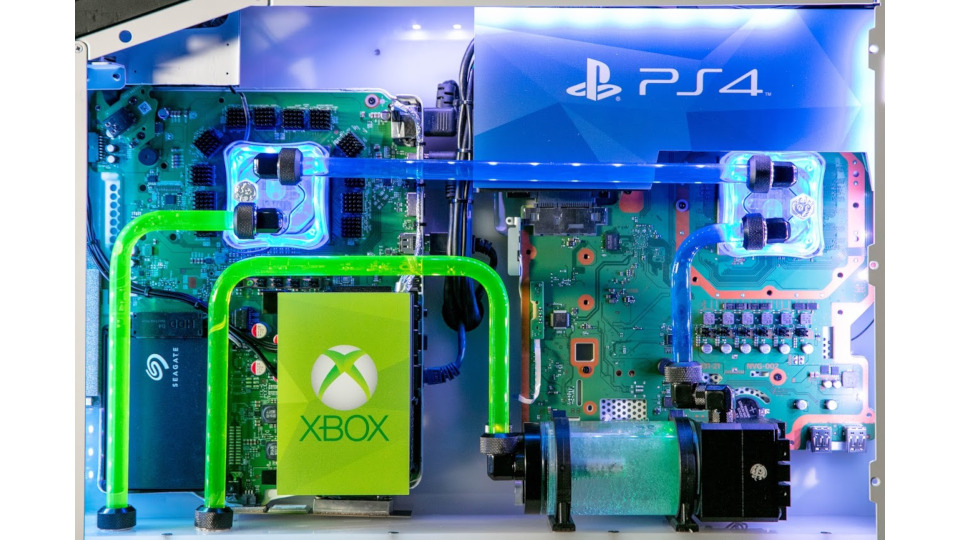 Origin PC is celebrating their 10th anniversary of building high quality, high-performance custom PCs. Part of this celebration has been the creation of the Big O PC which combines a high-powered gaming PC with an Xbox One X, PlayStation 4 Pro and Nintendo Switch inside a modified Origin PC genesis chassis. This build is a throwback to the original award-winning Big O system built in the early years of Origin PC’s history that at the time combined a powerful gaming PC with an Xbox 360.

By using their case modding and PC building expertise, the Origin PC team spent countless hours testing, designing, and building the modern Big O as a stunning technical showpiece. With inspiration from previous custom builds, the Big O offers an incredible hardline liquid cooling solution for the Intel Core i9-9900K CPU and Nvidia Titan RTX GPU, which also extends to the Xbox One X and PlayStation 4 Pro. As for the Nintendo Switch, the team built a custom dock in the front panel of the Big O using the original hardware in order to retain the complete “docking” capabilities of the system. Thus the Nintendo Switch can be docked for full-screen gameplay or removed to take gaming on the go.

You can view an unboxing video of the Big 0 below:

With every major gaming platform packed into the Big O, the team built an easy-to-use input and output at the rear of the system for video output, USB ports, and internet access. Either play with the consoles via the Elgato 4K60 capture card on the gaming PC or a single HDMI output pre-wired to support the three consoles.

“The amazing games and the incredibly beautiful, ridiculously powerful, and totally custom machines like the Big O keep me just as excited and passionate about gaming PCs today than I was 20 years ago when I started in this industry,” said Kevin Wasielewski, Origin PC CEO and co-founder. “We are very proud to celebrate our 10-year anniversary with the launch of the Big O and to share our passion and creativity with the world.”

The full spec of the Big 0: