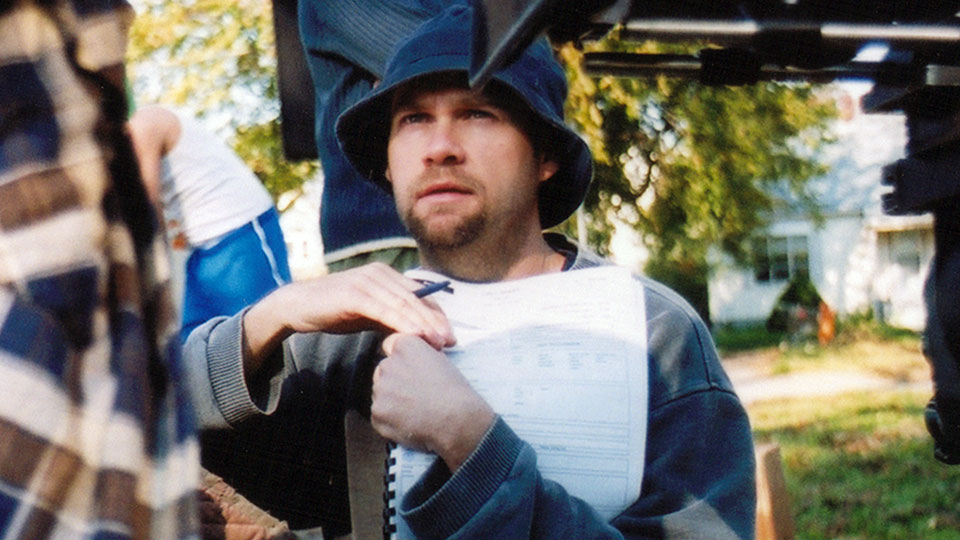 Canadian film-maker Jay Dahl will be bringing the World Premiere of his fantastic new film Halloween Party to Arrow Video FrightFest in August.

Packed with plenty of scares and lots of laughs, Halloween Party is one of the films showing outside of the main screen that you should make sure you buy a ticket to. Smart, entertaining and well-made, the film is destined to be a hit at this year’s festival.

I caught up with Jay recently to talk about the film, discuss the fantastic chemistry between the two leads and to find out the challenges of balancing horror and comedy.

Hi Jay. How are you today and where does this email Q&A find you?

Your film Halloween Party is screening at Arrow Video FrightFest. What’s it all about?

Halloween Party follows a college student, Grace (Amy Groening), on a journey to find out who killed her best friend after the girls trigger a cheesy though disturbing Halloween-themed computer meme. To trace the meme, Grace enlists Spencer (T. Thomason), a talented I.T. student, and together they discover the college has a terrible secret – the dorm rooms were once used as a hospice to house dying children – including the Balloon Babies, a local disease cluster of disfigured teens who wore masks to cover their monstrous faces and were therefore coined The Halloween Party. Now, Grace and Spencer must scramble to stop the kids from escaping – before it’s too late exclamation point! Also there’s a demon in a toilet; and a thing called vagina spiders.

How did you come up with the idea for the film and what inspired it?

I made a dark, apocalyptic horror in 2014 – There Are Monsters – and really wanted to do something more ‘fun’ – not quite comedy-horror, but something more reminiscent of those great date-movies of the 1990s. Halloween Party is that film – a loose homage to those ‘classic’ 90s college horrors – The Ring, Scream – that kind of thing.

Your two lead actors – Amy Groening and T. Thomason – have such fantastic and believable chemistry. How did you get them involved with the project and what were they like to work with?

I was lucky! Cast is always tough when you don’t have a lot of money. And they were great to work with. Amy Groening is the ultimate ‘adorkable’ college girl – she is smart, funny, nerdy, beautiful and takes absolutely no shit – all the things her character is. T. Thomason is another huge talent. Not just a gifted actor, T is a transgendered professional songwriter formerly known as Molly Thomason; he is a Canada-famous performer who recently won the top prize on The Launch (the Canadian version of Pop Idol).

The film delivers some truly terrifying scares and there’s a good possibility it’ll make people terrified of going to the toilet. What challenges did you encounter when bringing those moments to life?

The toilet challenge was tough – for about a thousand reasons. It was the one set-piece that most people weren’t sure we could pull off. It was risky. It was stupid. Could we really do it. It was a big question for all of us. I knew what I wanted but I wasn’t ever 100% sure it was going to work. Lots of questions. Do we put a little girl in a toilet? Do we build a rig? Is it practical or cgi or a mix? And will it have the intended effect, in other words, could I achieve the correct TONE? It had to be a perfect balance of Scary and Ridiculous – I knew if it was too ridic, I would lose the audience and it would be tough to get them back. It was a fine line.

The idea itself came from going to the toilet in the Sinai desert in a tiny Bedouin camp (I used to teach English in Cairo). I remember the spiders seemed as big as dinner-plates, they clustered in the little toilet shacks, and the daily poop was a deeply terrifying act, albeit a necessary one – every bowel movement a balance of both The Scary and The Ridiculous. I can’t actually recall a more vulnerable moment in my life than when I had to dangle my personables over this dark, vacuous hole in the desert – teeming with spiders, centipedes and other horrific things. Scary yet Hilarious.

You perfectly master the balance between tension and humour in the film, giving a little levity in the midst of some truly dark sequences. Why did you decide to do that rather than play it as a straight horror?

Thanks for saying – I’m glad it works! I think that comedy and horror are closely related – both are built on surprise, tension and the unknown. I do explore both in film and TV – my comedy work bought the house I can’t afford. And comedy always feels great when we’re scared – we search for a break, some relief. So intertwining the two seems very natural to me – it’s a very human thing to do. But when it comes to really good horror I do like it very realistic and very dark. For both I still think the bar was set in the 70s – Friedkin, Ridley Scott, Polanski, those guys – they all pushed for vérité performances, making highly realistic set-pieces – which lent so much to the horror of their films.

Financing a whole bunch of stuff. Some light, some dark – it’s all very exciting – I live in a constant state of “excited af” – though who knows which project will find its way.

Which film-makers would you say have inspired you in your career so far?

The toughest question. I think I might inspire too easily.

What’s the one horror film you wish you’d made and why?

Even tougher. I’m going to say Primer because I just saw it again and fell in love all over again, even after all these years. I know it’s more sci-fi than horror – but man, what a film. The only festival premiere I’ve been to where the whole audience stood up afterwards and started talking immediately, trying to come to grips with the experience.

Why should people at Arrow Video FrightFest check out Halloween Party?

Come for the scares. Stay for the gratuitous nudity.

Halloween Party will have its World Premiere at Arrow Video FrightFest on Saturday 24th August at 8.50pm in the Cineworld Leicester Square Discovery Screen. For more information and tickets please visit http://www.frightfest.co.uk.