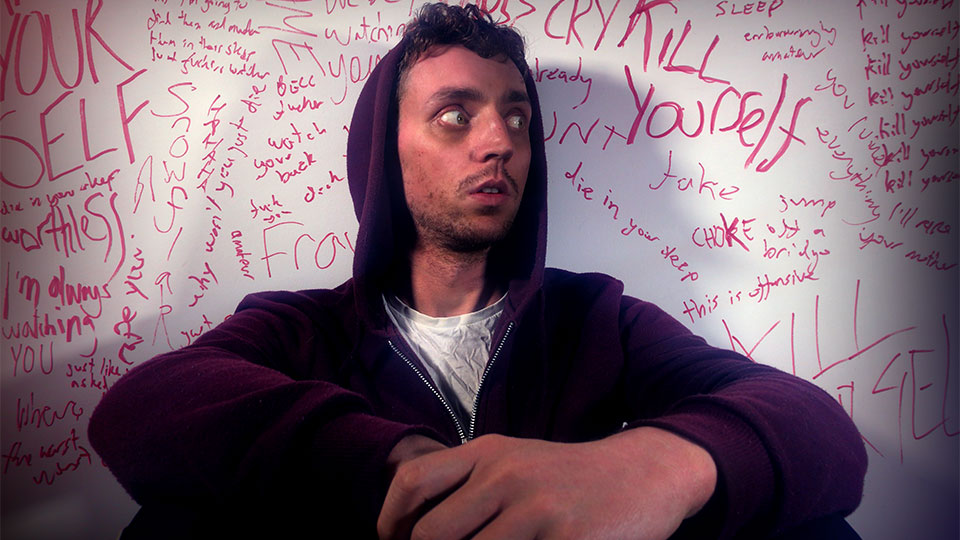 Film-maker Graham Hughes will be bringing his new film Death of a Vlogger to Arrow Video FrightFest in August.

Showing as part of the First Blood strand, Death of a Vlogger is a clever commentary on the lure and consequences of social media addiction. A combination of mockumentary and found footage, the film is sure to be one of the standouts of this year’s event.

I caught up with Graham ahead of Arrow Video FrightFest to find out more about the film, talk about the difficulty of juggling multiple roles while making it, and to talk about being part of First Blood…

Hi Graham. How are you today and where does this email Q&A find you?

Hi Pip, thanks for sending the questions through. Today finds me in sunny Glasgow, enjoying a rare day off and hiding inside from the sun.

Your film Death of a Vlogger is having its World Premiere at Arrow Video FrightFest as part of the First Blood strand. What’s the film all about?

Death of a Vlogger is a horror about the dark side of the internet. It follows Graham, a vlogger, doing everything he can to go viral. Unexpected fame comes his way when one of his videos contains an alleged haunting. The film takes a found footage/mockumentary approach, combining ripped youtube videos, message chats, talking head interviews and other mixed media, following Graham as he investigates the dark presence in his home, and the reaction that the internet has to his discoveries.

Where did the concept and inspiration for the film come from?

I had just had a bad break-up with a film (had to pull the plug two weeks before the shoot) and was taking some time off to recover. When the filmmaking itch came back, I wanted to make something that could be made in a more fluid and flexible way. I saw a film called The Dirties, an amazing found footage school shooting movie from Canada, and I loved how much they were able to achieve with the format. Instead of trying to make their $10k movie look like a $100k movie, they just embraced their limits and used that as the aesthetic. Really smart filmmaking.

Meanwhile, I had been making vlogs and other videos for some of the BBC’s online channels. It’s a world I know pretty well, and more often than not, the experience of putting yourself out there like that on the internet is a bad one. When I started looking for a subject to make a film about, this one made sense. I had a huge back catalogue of videos at my disposal, which meant I could insert myself into the middle of a narrative, using my previous videos as a documentary-style backbone to the film.

The film is a very clever commentary on social media addiction and Internet fame. Why do you think that those things have become so appealing to people?

Almost everyone has some sort of presence on social media, and if they don’t they likely are spending time with people who do. Society has changed so much in such a short space of time, we don’t really understand the long-term effects these things are having on our psyche. I’m not taking a stance on either side of the social media good/bad argument, but I definitely think it deserves a lot more thought and discussion.

What does scare the shit out of me is the mass spread of misinformation and flat out lies across social media. More than anything else, that’s what Death of a Vlogger is about. We can’t believe what we see, read or hear anymore. I mean, have you seen Deep Fakes? Jesus. Scary times.

You manage to pull of some incredibly effective scares over the course of the film. How difficult was it to get those right?

Some were pretty straight forward and some were incredibly difficult. I come from a comedy background, and I think horror (particularly scares) operates in a very similar way. It’s essentially set-up and punchline.

So, I felt pretty comfortable with the writing and timing of the scares, but the execution of some of them was tough. There’s one scene we shot on a VR camera in one 5 minute take, with several different practical effects happening throughout. Because in the story most of the big scare set pieces are from the vlogger’s youtube channel, it meant that they couldn’t be edited, so most of these scenes are single takes. I see a lot of hidden cuts in found footage films where there’s a camera glitch effect. When was the last time you had a glitch while recording a video on your phone? That feels lazy to me and I didn’t want to do that – it didn’t feel authentic – and this decision made it harder on us.

On top of all of that, I did all of the effects work myself, and I don’t have a visual effects background. So everything was approached from a logical point of view, and there was a lot of trial and error. For example, there’s a levitation scene in the film. First off I thought, we can tie him to a rope and sling it over a pull up bar. But as it turns out, one person can’t lift another person in that way… It took about four different iterations to get that scene made and I still had to do a fair amount of cleanup VFX in post.

You take on many roles in this film including acting, directing and writing. What were the challenges of juggling all of those things?

The two main challenges were the effects work, and the performance. With the effects, as I said, it was trial and error. I’ve done a fair amount of GFX, so I had ideas of how things might work out in my head, but I would end up trying them and finding that they only worked on paper. But that was a fun challenge. I don’t know how many people have made a film in this way, but it was an incredibly rewarding experience.
I could come home from work and decide to shoot a scene that night. I owned all the kit I used, and the film was shot in my flat, and if I didn’t like a scene, I just re-shot it. I was approaching it in the way I heard Pixar and other animation studios work (but on a much smaller scale). They’re always rewriting and re-iterating as they go, because they can do test scenes and animatics, and edit, and bring in actors for an hour of VO for some new scenes. Working on as small a scale as I did meant a similar process of working and re-working, building and writing as I went. I don’t think the script was 100% finished until about 2 weeks before I wrapped the shoot.

As far as performance goes, I’m an inexperienced actor, but the part was written to be similar to how I normally am in real life, so there wasn’t too much heavy lifting. On top of that, I’ve worked with Annabel Logan on several occasions and she is absolutely one of the most under-appreciated actors I’ve ever met, she’s brilliant. We did some big emotional scenes together near the start of the film, and she was able to coach me through them. That helped to set me up for the rest of the performance.
And in terms of juggling all the duties I had – well it worked because it had to, and I trespassed on the goodwill of a lot of friends and family!

Arrow Video FrightFest’s First Blood strand is a superb platform for emerging film-makers like yourself. How does it feel to be part of that?

I can hardly believe it, I am incredibly honoured to be part of FrightFest. I can barely think of the words. The elephant in the room too, is that found footage is a bit of a dirty word in horror right now. I think a lot of people have had enough. But I still believe there’s life in the genre, and it’s heart-warming to know that FrightFest do too.

Have you started thinking about your next project yet and are you planning to stick to the horror genre?

I have a couple of ideas. Both of them are horror, but I am keeping an open mind. Horror is my favourite genre, but I also love action, sci-fi, fantasy etc. Anything with a bit of genre, that’s my bag.

If you could have written and directed any classic horror film, which one would you choose and why?

Great question! I’d probably have to go with Evil Dead II. That film is a fucking masterpiece. I heard this great quote, probably from a DVD commentary or something, that Sam Raimi wasn’t sure if he was going to get a chance to direct another movie. I feel like that perspective completely permeates the film, it’s like it’s coming from a desperate man. He’s showing off as much as he can, because he might never be able to again. Every single shot there’s just something interesting, a cool idea, a gag, whatever. The film is just packed with inventiveness and ingenuity. Love it.

Why should Arrow Video FrightFest fans add Death of a Vlogger to their watch list for the festival?

Death of a Vlogger will screen at Arrow Video FrightFest 2019 on Saturday 24th August at 10.30am in the Prince Charles Cinema Discovery One screen. For more information and tickets please visit http://www.frightfest.co.uk. Watch the trailer for the film below: