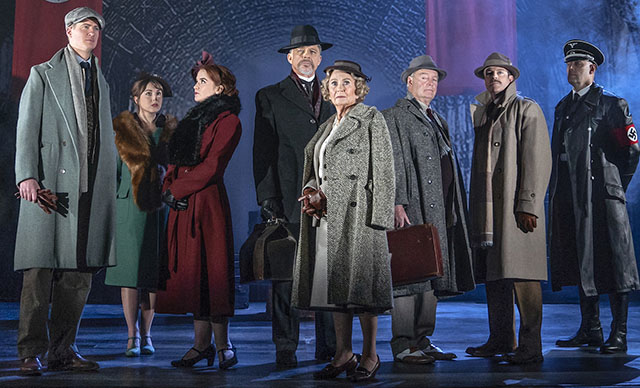 The Cast of The Lady Vanishes. Credit: Paul Coltas.

It’s a crowded train journey home to Blighty from the furthermost corner of Europe for Iris Henderson, who adopts an eccentric English governess as an unlikely traveling companion. But when Miss Froy vanishes into thin air, she’s told by almost everyone on the train that the lady never existed. Teaming up with dashing young cad Max, they soon uncover an abduction which reaches the very top of a governmental conspiracy…

The stage version of The Lady Vanishes profits from its solid source material in addition to being remarkably straightforward in its storytelling. Antony Lampard’s script carries over much of the wit and wisdom which Hitchcock wove into his film, whilst the well-executed mystery surrounding the vanishing lady establishes a strong hook.

That said, the play shuffles about for some time before casting its line. After a preamble of character introductions on a gloomy rail platform, the lack of movement makes you feel almost as weary as its stricken passengers.

Once the train gets rolling so does the story, which benefits from detailed and claustrophobic set design from Morgan Large. Cutaway carriage compartments frame the action in a filmic style, and there’s a welcome playfulness to Roy Marden’s direction which often indulges in farce.

Lorna Fitzgerald hands over a well-pitched performance as English rose Iris – a typically wilting and wearying portrait of femininity of the period. Fitzgerald ensures some of the obvious weaknesses are dialled down, but there’s still some outmoded motifs lingering in the writing.

Standing in for Matt Barber is James Boswell as Max, bringing a boundless, charming urgency to the action. There’s a relaxed and honest quality to the performance which often draws the eye. Together, the couple display a fine on-stage chemistry and manage to keep the wheels of this old stock turning over.

Supporting performances from Robert Duncan and Ben Nealon strike up a boozy double act, whilst Juliet Mills as Miss Foy is brilliantly doddery.  Notably, Joe Reisig cuts an imposing figure as a Nazi official, offering a sobering signpost to the global unrest that was soon to follow.

Just like the film which inspired it, The Lady Vanishes is a fun and foppish runaround mystery with its fair share of creaky, wobbly moments. It’s by no means an edge-of-your-seat thriller, rather a curious interpretation of a classic movie which is steeped in the era’s eccentricities. Despite being slightly silly and running out of steam before it reaches its final destination, there’s still lots to love.