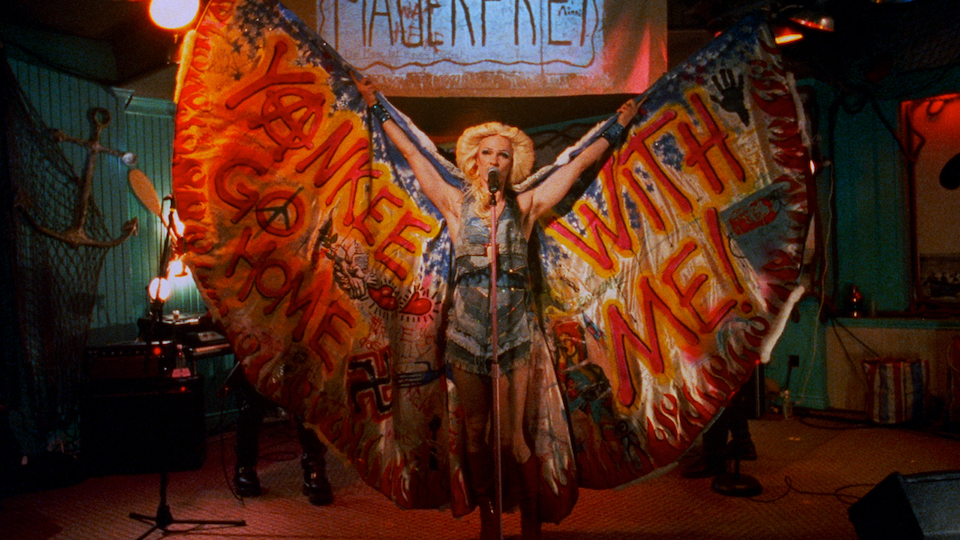 Writer, director, and lead actor John Cameron Mitchell announced himself to the world with Hedwig and the Angry Inch, the wild and raucous punk rock n’ roll musical adapted from his own off-Broadway stage-play. Featuring fabulous songs written by Stephen Trask, this modern cult classic is a free-form flight of fantasy, mixing animation, live performances, music video style interludes, and even stock footage from the Cold War. The film has been lovingly restored in 4K for this Criterion Collection release, but thankfully retains its lo-fi punk aesthetic.

Mitchell plays Hedwig, the “internationally ignored” lead singer of her band The Angry Inch. Born a boy in Cold War-era East Berlin, Hedwig had a sex change in an attempt to marry a man and leave communist East Germany. The operation was botched, leaving poor Hedwig with a one-inch mound of flesh between her legs. The titular angry inch.

Hedwig is touring the US in the wake of rock god Tommy Gnosis (Michael Pitt), playing in all the cities that he is performing. Whereas he is filling out stadiums, Hedwig and her band are playing in all-you-can-eat buffet restaurants. Hedwig and Tommy used to be lovers. She taught him all about rock and roll. They even wrote songs together. And then Tommy stole them all and became the biggest star in the world.

The film is mostly told in flashback, with Hedwig narrating to her audience in an almost German cabaret style. Indeed, much of the films visual and stylistic touchstones come from European cinema. The use of colour, and the ferociously energetic style has a touch of the anarchic early films of Almodovar, whilst the collision of politics and sexual identity explored in the film seems to intentionally evoke the work of Rainer Werner Fassbinder.

It is a wild ride of a film, exploring themes of abuse, betrayal, abandonment, gender, mythology, and philosophy. That Mitchell pulls all of this together in just over 90 minutes, and still makes Hedwig and the Angry Inch a hilarious and foot-stamping blast of rock n’ roll fun is an extraordinary achievement. Trask’s songs, a terrific mix of angry punk, rock anthems, and power ballads still sound fantastic. The title track “Angry Inch” and “Wig in a Box” are just two of the highlights.

This Criterion Collection release comes well served with bonus content, kicking off with a feature length commentary recorded in 2001 with John Cameron Mitchell and director of photography Frank G. DeMarco. A Hedwig Reunion is a brand new and exclusive hour-long programme, bringing together all the key collaborators for a reunion conversation. They discuss the early days of Hedwig as an off-Broadway play, the challenges of making the film, and the legacy of Hedwig.

The Music of Hedwig is a brand-new interview exclusively for this release, with music critic David Fricke speaking to the film’s composer and songwriter Stephen Trask. Whether You Like it or Not: The Story of Hedwig is a feature length documentary from 2003, directed by Laura Nix. The film charts the history of Hedwig, from her first appearance at a party, then the stage play, and then eventually the film.

There’s a terrific From the Archives featurette, as John Cameron Mitchell, costume designer Arianne Phillips, and hairstylist/make-up artist Mike Potter dive into their Hedwig archives. There’s lots of really interesting stuff here. Elsewhere on the disc is Anatomy of a Scene, a short documentary produced by the Sundance channel in 2001, looking at the creation of Adam and Eve sequence between John Cameron Mitchell and Michael Pitt.

Finally, there are 12-minutes of deleted scenes with optional commentary from the director, and the original theatrical trailer. The booklet with the disc comes with an essay by Stephanie Zacharek, along with production photos by Mike Potter and Arianne Phillips, illustrations by animator Emily Hubley, and excerpts from Plato’s Symposium and The Gospel of Thomas, two of the film’s inspirations.