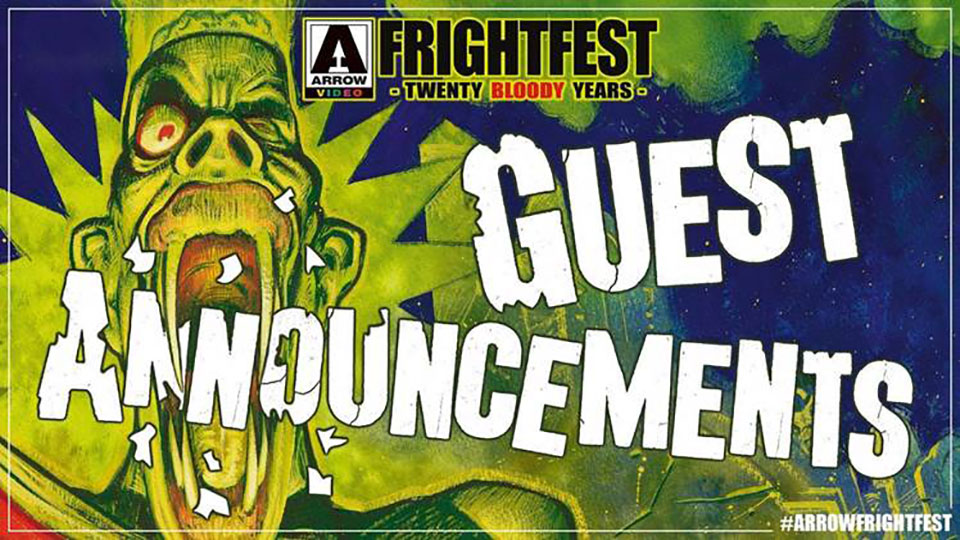 Arrow Video FrightFest has announced more guests, more details on some special events and the short list for the Screen Genre Rising Star Award for this year’s festival ahead of single tickets going on-sale from Saturday 21st July.

It was previously announced that genre legend Dario Argento would be in attendance along with The Soska Sisters, who are premiering their remake of David Cronenberg’s Rabid.

Returning alumni for this year’s festival include Abner Pastoll, at the event with the closing night film A Good Woman is Hard to Find, alongside many of the cast, producer/director Ant Timpson for opener Come to Daddy, Bliss director Joe Begos, joined by stars Dora Madison and Graham Skipper, Daniel Isn’t Real helmer Adam Egypt Mortimer and Paidraig Reynolds, director of Dark Light, accompanied by his cast including Jessica Madsen (Leatherface).

Plus, Jordan Barker returns with Witches in the Woods, with lead actress Hannah Kasulka, Dan Bush with The Dark Red, accompanied by lead actress April Billingsley and the Pierce Brothers are back with The Wretched.

Homegrown talent in attendance this year includes Crawl star Kaya Scodelario, alongside cast and crew from Madness in the Method, including Busted singer/songwriter and actor Matt Willis. Tales From the Lodge director Abigail Blackmore will be there with her all-star cast, including Mackenzie Crook and Laura Fraser. Plus, Lawrie Brewster returns with anthology For We Are Many, accompanied by crew and cast including Nicholas Vince. Tom Paton is also back with Stairs, along with Here Comes Hell director Jack McHenry and Andrew Desmond, director of The Sonata.

All of the directors from the First Blood strand will be present – Death of a Vlogger director Graham Hughes, A Serial Killer’s Guide to Life director Staten Cousins-Roe, Criminal Audition director Samuel Gridley, Dark Sense director Magnus Wake and Fredi Nwaka, director of Are We Dead Yet?

The Screen Genre Rising Star Award will return this year, in association with Screen International. This year’s short list salutes the work of Abigail Blackmore, director of twisty, terrifying black comedy horror Tales From the Lodge, Staten Cousins-Roe for his highly original and compelling debut feature A Serial Killer’s Guide to Life, actress Rebecca Rogers for her stunning lead performance in Stalked, Jack McHenry for his exuberant genre cocktail of caviar and carnage Here Comes Hell and director/actor Fredi Nwaka for his devilishly clever feature Are We Dead Yet?. The winner will be revealed on Monday 26th August, 6,30pm at the Cineworld Leicester Sq.

Events this year include the UK launch of Dario Argento’s autobiography Fear. Fans can see the genre icon and giallo legend take to the stage to talk about the book and life at the top during Rome’s Golden Horror Era. Argento’s life-long friend and FrightFest co-director Alan Jones, who adapted, edited, annotated and illustrated the FAB Press publication, will be the master of ceremonies at this must-attend event followed by a signing session.

The discovery of new voices in the world of genre filmmaking is close to FrightFest’s darkly beating heart and the festival has teamed up with UK distribution outfit Blue Finch Films and short film funding company Genera, to launch a new initiative to help finance genre short films that are in the latter stages of development. With a £1000 fund on offer, the finalists will pitch their films to an industry panel and the winning film will be announced at the end of the festival. Hosted by FrightFest’s Short Film programmer Shelagh Rowan-Legg, the panel will include filmmaker actress Joanne Mitchell and Blue Finch Films’ Mike Chapman.

Rosie Fletcher, editor of Den Of Geek, will host From Page to Scream, featuring top horror authors whose work has been adapted or optioned for the screen. They’ll talk about the processes and pitfalls of getting a novel turned into a show or film, what it’s like seeing their creations come to life and about how the landscape of horror is changing in books, film and TV.

FrightFest, in association with Supermassive Games, presents a special preview of Man of Medan, the first game in The Dark Pictures anthology. Hosted by Barry Keating, there’ll be a live Q&A with the key development talent behind the game. The much anticipated interactive narrative horror adventure, developed by Supermassive Games and published by Bandai Namco Entertainment Europe, brings supernatural horror on board a ghost-ship adrift in the South Pacific. It is set to be released on 30th August 2019.

To celebrate FrightFest’s 20th year the Duke Mitchell team have once again scoured the Earth to find the weirdest pieces of film & cinema ever to have flashed into our eyeballs. Add to the mix some very SPECIAL guests, endless giveaways and brilliant trailers and it means the Duke Mitchell Film Party is the only place to be on a late night Saturday at FrightFest!

There’ll be even more guest announcements coming ahead of the festival.

Single tickets go on sale Sat 20th July at noon and, alongside the few remaining Festival and day pass sales, are available to buy online at http://www.frightfest.co.uk/tickets.html.