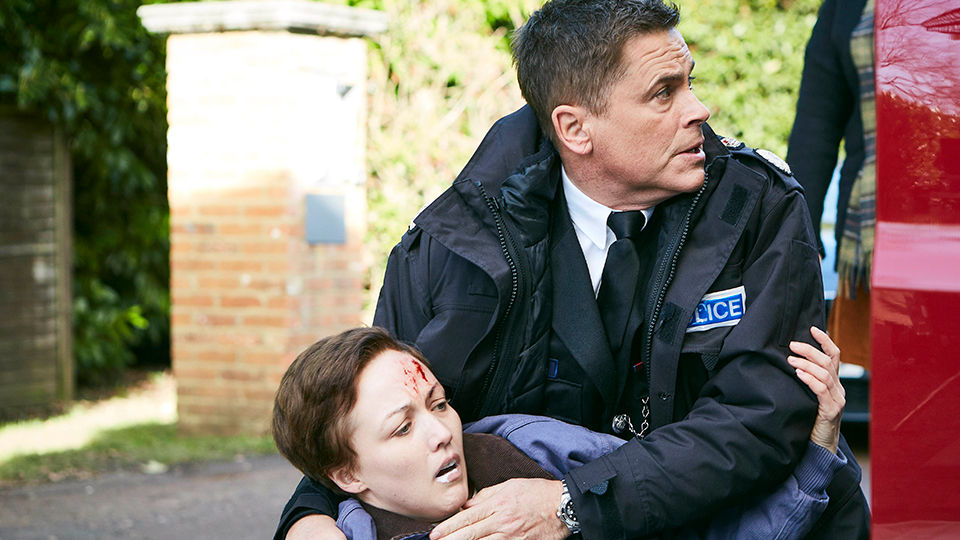 A body found in a suitcase linked to a farm that employed immigrants was the focus of the investigation on the latest episode of Wild Bill.

Bill (Rob Lowe) and Keith (Tony Pitts) started the episode shooting and were approached by Oleg (Aleksandar Jovanovic) who told them that immigration was going to ruin the country. Bill spoke to the farm owner Darren Bailey’s daughter Charlene and asked where her father was.

Sean (Anthony Flanagan) and PC Drakes (Divian Ladwa) found a suitcase in a river but Sean refused to have anything to do with it. He left Drakes stood at the side of the river looking at the suitcase.

Bill and Kelsey (Aloreia Spencer) had a brief heart-to-heart as he dropped her at school. At the station Bill complained to Lydia (Anjli Mohindra) about having to go to a photo opportunity to help Keith get re-elected.

Arriving at the farm, Keith was waiting for them and found chaos as Border Control were taking the workers away. As Darren’s daughter Charlene (Nichola Burley) looked on helplessly, Lubica (Katarina Cas) provided documents to prove the immigrants were legal and Bill met Darren’s sons.

Charlene told Bill and Muriel (Bronwyn James) that she was concerned about her dad after not seeing him for 6 days and she handed his phone over. It was revealed that she and Muriel had gone to school together and that Charlene fell pregnant at 16.

Muriel got access to Darren’s phone and found that he was monitoring all of his workers. They found footage of Darren’s girlfriend acting strangely on the last night that Darren was seen.

Sean and Drakes returned to the river to see what was inside of the suitcase. After pulling it out of the water, Sean opened it up to find Darren’s body inside.

Bill and Muriel returned to the farm to tell Charlene that her father’s body had been found. As she broke down in tears, Muriel told the family that he was hit in the back of the head. Tensions flared when Lubica arrived and it became clear that she didn’t get on with Darren’s sons, who believed she was cheating on him.

As Lubica packed her bags, Bill asked questions about the video footage they’d found on Darren’s phone. Lubica admitted they had been rowing and Bill gave her a hand with her bags.

Bill noticed that the workers weren’t too sad about the death of their boss while Charlene spoke to Muriel about giving her baby away.

Returning home, Bill found Kelsey and Alex (Esha Gopal) spending time together. Alex asked Bill how you can tell if someone likes you. Bill gave him some advice and told him that Kelsey would be there to pick him up if the object of his affection rebuffed him.

Bill had another run-in with Lisa (Angela Griffin) who was pinning the murder of Darren on Lubica.

At the station Muriel was listening to audio from Darren’s phone of the workers ranting in Slovenian. Bill asked Muriel if Darren’s sons could have been involved but she didn’t think they had wanted him gone.

Sean and Drakes watched Tomas Kovac (Adrian Fekete), a worker who seemed oddly close to Lubica and had issues with the lack of pay he received from Darren.

Muriel visited Charlene to ask for the accounts of the farm. She took the last three years of accounts and sifted through them with Bill. He collected everything up off the desk without saying a word and took them to Mary (Rachael Stirling). Before she would give him any information, Mary tried to explain why he saw her ex-husband in her house when they last saw each other.

Bill’s phone rang and he hung it up, returning Mary’s focus to the accounts. Mary discovered that Lubica was the owner of the farm but they didn’t think that Darren’s children knew that information. Sean tried to get Muriel’s attention and when he finally succeeded, he showed footage of Tomas with the suitcase that Darren had been found in.

Muriel led a search team at the farm and went through Tomas’ locker, discovering that he’d done a runner. Bill meanwhile questioned Darren’s children about the ownership of the farm and told them he was freezing their assets during the investigation. As Muriel pressed Charlene, Charlene started to panic that she had been responsible for her father’s death by introducing him to Lubica.

Taking Lubica in for questioning, Muriel tried to get to the bottom of what was going on. Lubica claimed that Darren closed his dirty company and opened a new one to hide his mess. Muriel asked Lubica who Darren was in cahoots with and told her that Tomas got rid of Darren’s body. Lubica wouldn’t give up Tomas’ location.

Charlene confided in Bill, telling him about falling pregnant and being forced to give up the baby by Darren. Bill worried that Charlene might do something stupid but she said she wasn’t brave enough to.

Returning home, Bill asked Kelsey about her suicide attempt and wanted to know how she had felt when she took an overdose. Kelsey admitted she was angry with her mother before telling him that Alex had tried to kiss her, which was a shock given that he’s supposed to be gay.

Lubica spent the night in a cell and asked to speak to Muriel. She told her that Darren had a secret safe that might have the answers they were looking for in it. When they got back to the farm, Darren’s sons were furious and admitted they’d paid someone to find and kill Tomas. Lubica took Muriel, Sean and Drakes into the house and opened the secret safe. Inside it were letters written in Polish and Muriel was furious. As she tried to leave, Charlene charged at Lubica and Tomas arrived, surrendering to Muriel.

During questioning Muriel asked Tomas how he was able to send home £15,000 when he was barely earning anything. He refused to say anything but when he passed Lubica in the hall, she said something in Slovenian. Muriel asked what Lubica had said and she told her she’d reassured Tomas not to worry. Lubica then dropped a shocker by revealing that she told Tomas to put Darren’s body in the suitcase and dispose of it.

Expecting a confession from Lubica, Muriel was shocked when Lubica told her that she found Darren’s dead body but she hadn’t killed him. When asked why she’d been lying, Lubica said that she didn’t think anyone would believe her. Muriel wasn’t buying the story and asked why Tomas was helping her to which Lubica responded that Tomas has feelings for her.

Lubica went on a rant about how the UK views immigrants and when she was done, Muriel refocused her on where Tomas got the money from. Refusing to confirm anything, Lubica eventually revealed that the farm was money laundering through its workers.

After getting to the bottom of the money, Muriel and Bill turned their attention to finding a murder weapon so they could identify the murderer. They spent time in Darren and Lubica’s room, where his body was allegedly found. While they were looking, the results came through from the autopsy which revealed Darren had been poisoned and his head injury was caused by a fall.

Bill asked Muriel to get the brothers so he could speak to them. They told Bill that Charlene used to get coke for their dad and they realised that she’d run off. Bill saw a photo of Darren with Oleg and surmised that’s where she must have gone. They tracked her down and after crashing her car, Charlene fell out of the vehicle to the floor and was gravely ill after snorting the poison-laced cocaine, which had been obtained from Oleg.

When Bill returned home, he found Mary and Kelsey getting to know each other.

Muriel got Darren’s letters translated and discovered that he’d been keeping tabs on his granddaughter. She handed the letters to Charlene who asked Bill if they had enough to arrest Oleg for. Bill admitted they hadn’t and encouraged Charlene to find her daughter.

Lubica and Charlene shared a friendly exchange and Lubica told Bill that she was going to run the farm, improving the lives of the workers in the process.

The episode ended with Bill visiting Keith and Oleg, and firing a gun at the cars in the field warning Oleg that next time, his aim will be better.