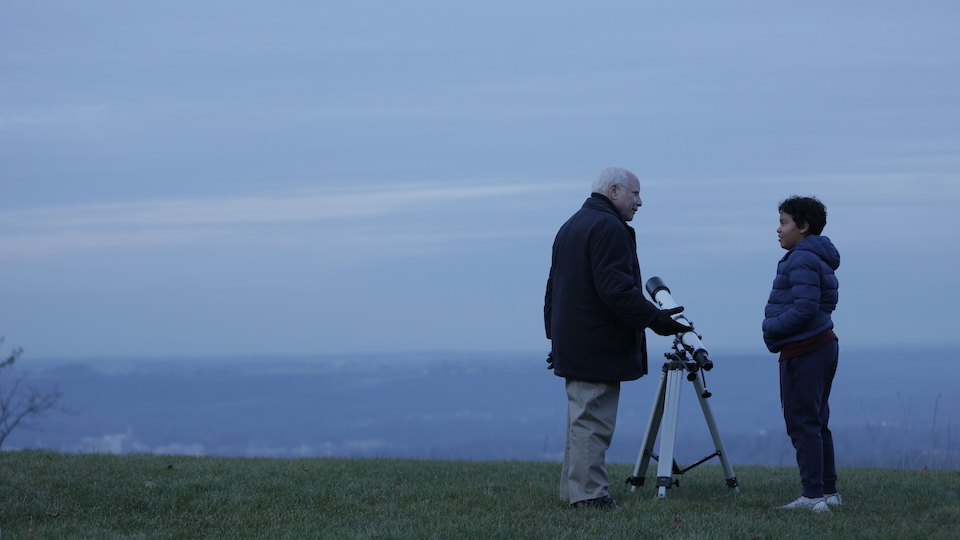 The feature debut from writer-director Shelagh McLeod, Astronaut makes its World Premiere at EIFF this week. This gentle and sentimental drama starring Richard Dreyfuss goes straight for the heart-strings, with its tale of an elderly man hoping for one last chance to follow his dreams.

Richard Dreyfuss plays Angus, a 75-year old retired civil engineer. He is a widower, suffering from a heart condition. All his life he has been fascinated by astronomy, and obsessed with going to space. It is his lifelong dream. Throughout the film there is a comet passing close to the Earth that can be seen at all times, reminding Angus of his dream. He spends his nights gazing up at it through his telescope.

Meanwhile, billionaire tech entrepreneur Marcus Brown (Colm Feore) is holding a Willy Wonka style lottery for some lucky member of the public to be on the first commercial flight to space, which his company is funding. From twelve lucky lotto winners, one will be selected by the public. Angus sees this as his last chance, and despite being ten years over the age limit, and far too ill, he enters and is selected as one of the twelve.

McLeod’s script, adapted from her own short film (The Great Escape, 2017) is at pains to remind the world that you are never too old to make a difference. That you are never too old to have something of value to say. This is neatly played out in the film in both personal and professional terms. At home, Angus’s family are concerned about his welfare as his health deteriorates, and so his living arrangements are changed against his will. At the space centre, Angus expresses concerns about the safety – using his lifetime of experience as an engineer – but is sidelined and ignored. He’s just an old man after all.

Astronaut is a very simple movie, and it tells its story in the most simplistic of styles. Dreyfuss’s involvement adds a sheen of prestige, but this does feel very televisual rather than cinematic. Visually, it is something of a contrast. The exterior scenes, especially those of the star-filled sky are quite breath-taking. However, a lot of the interior scenes are shot in a flat, mid-shot style, and I personally found that quite jarring.

The film is definitely aimed at an older audience than it is perhaps going to find on the festival circuit. The antics of Angus and his fellow retirement home residents might aim for Cocoon and The Best Exotic Marigold Hotel, but it falls quite a way short of both. The dancing scene in particular will make you cringe so hard it’s possible you will feel actual physical pain.

However, if you’re a fan of Richard Dreyfuss playing a man in the throes of obsession, harking back to his iconic turn in Close Encounters of the Third Kind, then Astronaut will definitely deliver. He elevates every scene. But unfortunately, not even an on-form Richard Dreyfuss can get this Astronaut to blast off into orbit.