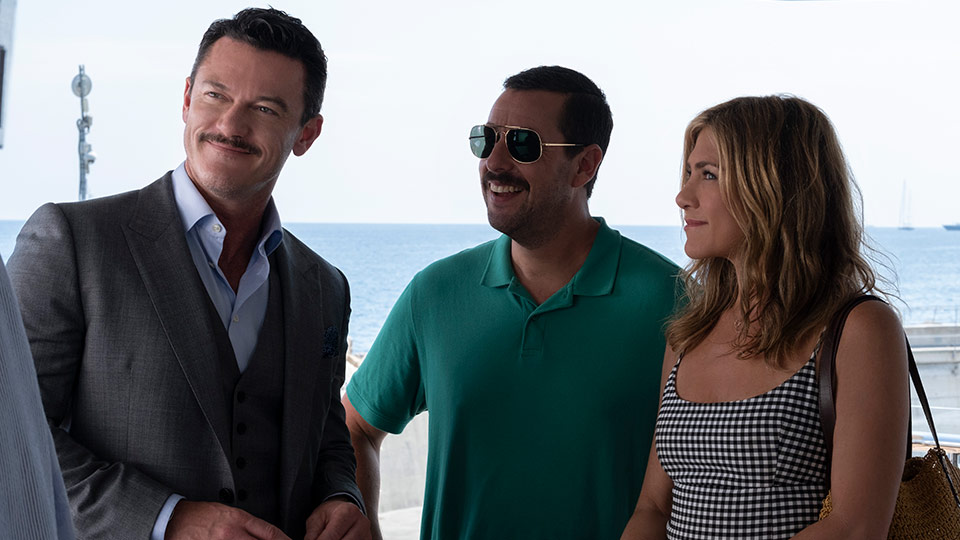 When Murder Mystery opens with a 2014-era joke about a smart watch, the bar is set for the rest of the film, and what follows is 90-odd minutes of tame viewing that never transcends mediocrity, not that it particularly tries to.

The rom-com mystery was released on Netflix on June 14th, and centres on married couple Nick (Adam Sandler) and Audrey (Jennifer Aniston) as they accidentally become entangled in a cruiseship murder. Parodying the pulpy nature of the murder-mystery genre, the story follows Nick, a downbeat beat cop who has failed his detective exam three times, and Audrey, a hairdresser with a penchant for murder mystery novels, as they finally embark on their long awaited trip to Europe for their anniversary.

Their plans are soon derailed when the charming Charles Cavendish (Luke Evans) invites them onto his billionaire uncle’s cruise ship along with a host of comically cartoonish characters (including an entertainingly melodramatic David Walliams) who will all become suspects in the titular murder mystery. It’s not long before the billionaire uncle, Malcolm Quince (Terence Stamp), is killed with an antique dagger and Nick and Audrey are left to solve the crime whilst evading the authorities themselves.

Directed by Kyle Newacheck and written by James Vanderbilt, Murder Mystery is a comedy that ultimately isn’t very funny. None of the jokes are as good as they think they are, and they don’t even think they’re that good. They aren’t offensively bad, just lacklustre. It’s disappointing as the likeable cast and the novel premise could have made for a sharp and original comedy that plays with the cliches of the murder mystery genre, but instead it mostly falls flat.

This disappointment is exacerbated by the fact that Sandler has been in top form recently. He put out one of his best performances in 2017 in The Meyerowitz Stories, which is also on Netflix, and released a critically acclaimed stand-up special, 100% Fresh, last year. Yet despite Sandler not being at his best here, it is his and Aniston’s performances that are the most enjoyable aspect of the film. The dynamic between Nick and Audrey is done well, with their bickering providing the funniest moments (not that the bar is set very high).

The mystery itself bombards you with twists and turns that seem to be the result of spinning a big wheel of plot contrivances rather than anything more methodical, but Murder Mystery isn’t trying to be very original or clever, and to a certain extent that works. The best way to enjoy the film is to sit back and let it wash over you, while supporting characters like the Maharajah (Adeel Akhtar) and Inspector de la Croix (Dany Boon) try to squeeze as much as they can out of a tired script. It has its merits, and some of the riffing on the familiar genre is fun, but I found myself willing there to be no more twists so that it would all end.

Whilst Murder Mystery isn’t doing anything new or particularly exciting, it does have the good grace to be relatively short. So if you’ve got an hour and a half to kill and feel like flexing your detective muscles, it might be worth a watch.