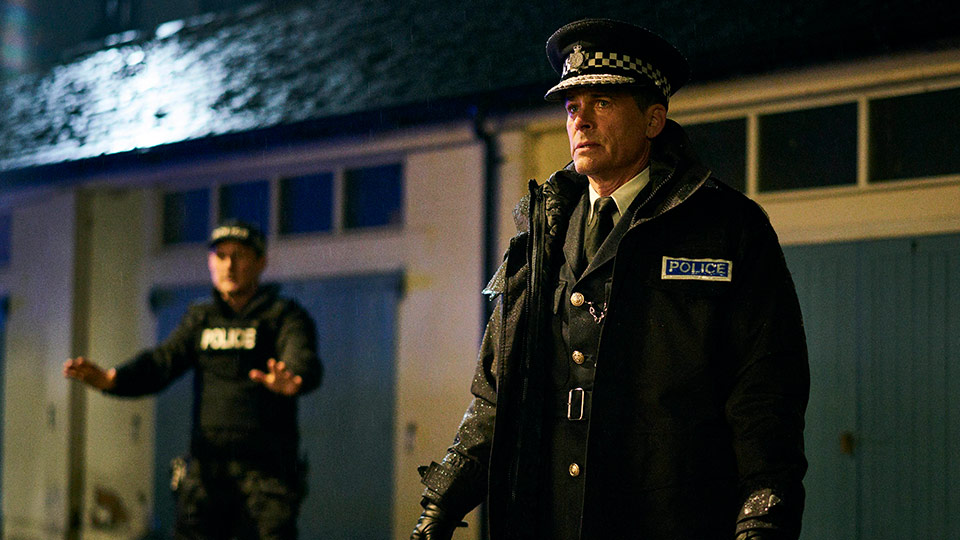 Bill (Rob Lowe) returned to work and tried to win his team over on the latest episode of Wild Bill.

Tonight’s episode opened with a worried looking man (Craig Parkinson) making a quick exit from a coach and heading for the beach. He waded into the water with a plastic bag in his hand.

The action then changed to the station where Bill unexpectedly arrived back at work and announced that he wasn’t quitting. ACC Lydia Price (Anjli Mohindra) was less than impressed at Bill’s return and couldn’t hide her feelings when he started working through cold cases, settling on the Boston Bandit.

The man seen in the opening was then seen walking the streets and playing a piano at a train station. When a woman stopped and smiled at him, the man had flashbacks to a series of armed robberies, which he presumably committed, and it was suggested that he’s the Boston Bandit.

DC Muriel Yeardsley (Bronwyn James) tried to get some insight into the Boston Bandit case from a DS Blair (Steffan Rhodri) but he made it clear he was no fan of Bill’s way of managing the department.

At home Bill and Kelsey (Aloreia Spencer) watched a video of the Boston Bandit playing piano and Kelsey admitted she wished that her father hadn’t let her quit learning piano. He reminded her of a note she gave him saying she wouldn’t blame him for her decision to quit and she told him he shouldn’t have listened to her as she was a child. She also pushed Bill to unpack his late wife’s belongings.

Muriel had an unexpected meeting with Kraznov (Aleksandar Jovanovic) who was at her parents’ house. It was revealed that the family had £200,000 debt and Kraznov told her that he had bought the debt.

Bill found more resistance from Lydia after he asked her to complete a task, which she refused to do. He took the opportunity to confront her over the video she shared and she told him she didn’t know where it came from. Lydia also said that she sent the video because she knew Bill was bad for the place.

The piano man continued to garner local fame for his piano playing skills. He was harassed by a group of teenage boys and when he tried to strangle one of them, he was arrested by Lydia who happened to be there.

Keith (Tony Pitts) spoke to Bill about what had happened to the piano man, which was being reported as police attacking him, and told him to clear up the mess as well as criticising him for using Americanisms.

Muriel tried to get some information from the piano man who claimed that he didn’t know who he was or where he came from. She suggested that they run his DNA but he wasn’t sure he wanted to do it. Muriel told Bill what was going on and he suspected that the man was trying to hide something.

Bill took matters into his own hands and approached a DNA lab to test the coffee cup that the piano man drank from. Running the information through the database he found a match linking to an old case and it seemed to confirm the man was the Boston Bandit.

Muriel brought the man back into the station under the ruse that he was recognised from YouTube. As he walked into the station, there were photographers and Bill arrested him for armed robbery and murder. Lisa Cranston (Angela Griffin) was on hand and seemed surprised at the revelation.

Bill told Muriel that she needed to prove his guilt and claimed he had no evidence that the man was the Boston Bandit. In interrogation Muriel took the man’s DNA and told him the crimes that he allegedly committed. He didn’t deny it and asked Muriel to tell him everything he’d done so he could finally find out who he was.

The news was announced during a police press conference where one of the Boston Bandit’s victims showed off his fake leg, which was a result of being shot during an armed robbery. Bill told the press that he was prioritising cold cases to solve as many as possible. The victim turned out to be Lydia’s father and Bill asked her why she didn’t tell him about her personal connection to the case. It looked like Lydia might actually be warming to Bill though.

That evening Bill met Mary (Rachael Stirling) who thought she’d been asked out on a date. Bill realised his error and suggested maybe they could turn their meeting into a date.

Working late, Muriel received a call from Kraznov who told her the man arrested as the Boston Bandit wasn’t the right man. She found the coffee cup that Bill had taken to test illegally.

Bill and Mary’s ‘date’ escalated quickly and they had sex. After their intimacy, Mary quizzed Bill about the piano man and told him that he needed to find out the identity of the man as she would be asking him for more details in court.

At the prison, Bill went to check on the piano man and found him with a bed sheet around his neck and hanging from the door. He got there just in the nick of time and saved the man’s life. At the hospital he came around and told Bill that he thinks his name is Si. Pushing for more information, Si admitted that he thinks he knew the man he was accused of murdering and asked Bill to help him find out who he was.

Back at the station Bill confided in Muriel that he didn’t believe that Si was actually the Boston Bandit. Muriel and Blair paid a visit to PC Sean Cobley (Anthony Flanagan) who suggested that maybe the Boston Bandit wasn’t just one person, meaning that the idea that Si could use both hands equally, like they believed the Boston Bandit could, may be irrelevant.

Muriel visited Lydia’s dad and tried to find out why he was shot by the Boston Bandit when no one else had been. He became upset and asked Muriel to leave, and on her way out she found a bullet hole in the shop window. It came out that Lydia’s dad had shot at the Boston Bandit and wounded him, once again ruling Si out as he had no gunshot wounds.

In court Mary gave Si bail and Bill overruled DC Blair, saying there was no issue with Si being granted bail.

Bill paid Si a visit and they discussed the loss of Bill’s wife. Si asked if Bill thought that he might have a wife out there, pointing out that no one had ‘claimed’ or identified him yet.

The next day Bill told Muriel that he’d switched his analytics to focus on the victim. In doing so he discovered that all of the shops robbed had bought the same video cameras from the same company. Muriel went to visit the company but DC Blair told her the company had gone under. He also told her he knew that she’d met with Kraznov as she’d been seen before encouraging her to ask Si about her latest discovery.

When she arrived at Si’s apartment, she found him upset and sat in silence. He asked her to leave him alone but Muriel ignored him offering to tidy up his flat. Bill called Muriel and told her that HMRC had pulled the details of the tech company’s employees and one of them was Si. He urged her to stay away from him unaware that she was already in his flat and had found a gun in one of his cupboards. Si attacked Muriel as Bill listened at the other end of the phone.

Bill and Sean raced over to Si’s place where he had a gun to Muriel’s head, threatening to kill her. Si claimed that he remembered killing his victim and Blair attempted to shoot him with Sean’s gun, only to find that the gun was empty.

The goodwill Bill had built with Lydia evaporated when it turned out he had arrested the right man in the first place only to let him almost kill Muriel by releasing him on bail. The newspapers criticised Bill’s handling of the case and Muriel met with him to show him the car that Si allegedly killed his victim with.

Trying to get answers, Muriel took Si to the crime scene for a re-enactment where Bill revealed that Si wasn’t the person he said he was. The real Simon Simons was a black man and Bill explained that trauma was stopping him for remembering what really happened. The fake Si explained that he’d met the victim on the beach and they’d been romantically involved. It transpired that Si was a passenger in the car, not the driver so he wasn’t the killer after all.

As his memory started to return, Si was asked to remember who the killer was that put him behind the wheel of the car that killed the victim. Si pointed at DC Blair and it was revealed that he was the real killer. Muriel arrested him and as she put him in a police car, he made a thinly veiled threat about her being unprotected without him.

Bill returned home and started to go through his wife’s things. The next day he met up with Si, who had discovered his real name was Herbert and he was a married man who was secretly gay. Herbert got on a coach and left Boston as Bill watched on.