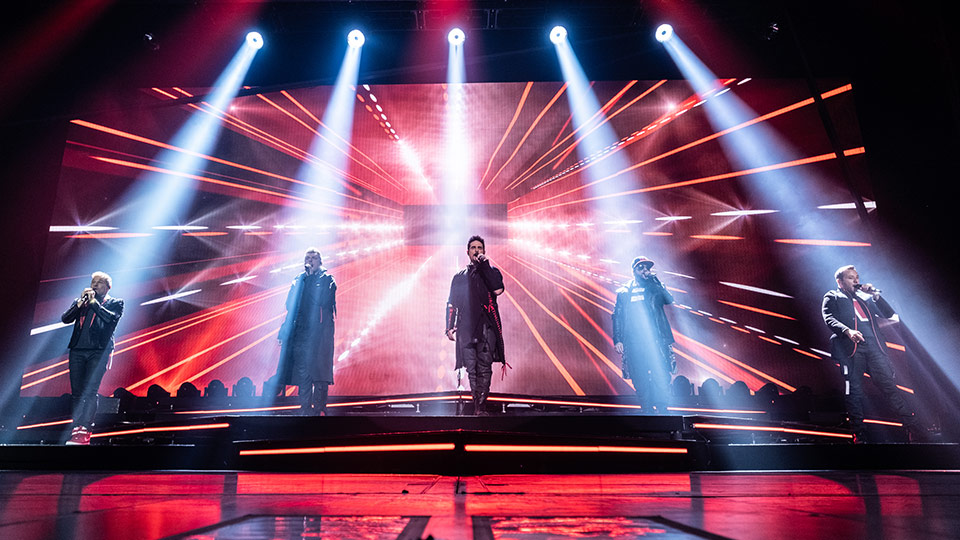 Since breaking through with their debut single We’ve Got It Goin’ On in 1995, Backstreet Boys have gone on to be one of the biggest boybands of all-time. The five-piece – Brian Littrell, Nick Carter, AJ McLean, Kevin Richardson and Howie D – have released 9 studio albums and countless hit singles. During their 26 years together so far, the band has never split – although Kevin did leave for 6 years to pursue other projects – and they’ve toured consistently. Their last UK shows were in 2014 in support of their eighth album In a World Like This and last night they returned for the first of two shows at The O2 Arena in London as part of their DNA World Tour.

At a time when nostalgia is reaching an all-time high, Backstreet Boys delivered a show that was designed to celebrate both their fans and their incredible career in pop music. Arriving on stage at 9pm, the group performed 33 tracks during their two-hour set squeezing in all the hits, plenty of fan favourites and selections from their DNA album. There was barely time to catch breath from the moment they began and Backstreet Boys proved why they are one of the best-loved boybands in the world all these years on. They opened the show with a shortened version of Everyone from 2000’s Black & Blue before taking it right back to 1995 with I Wanna Be With You, which featured on their self-titled debut album.

The first of the hits came next as The Call roared through The O2 Arena and the audience went wild. Backstreet Boys impressed as they performed some pretty intense choreography whilst singing completely live. They worked the stage, which had a V-shaped catwalk, making sure that fans could be as close to them as humanly possible. Throughout the evening there were solo sections featuring different members singing snippets of album tracks from DNA before being joined by the rest of the band to finish the song. AJ and Kevin performed Passionate together after getting changed in a make-shift dressing room in the centre of the stage with Kevin joking that they were protecting the audience from seeing them without their clothes on. Judging by the amount of screams from the crowd, I doubt they would have minded!

In the first half of the show it was nice to hear some of the band’s more underrated song such as 2005’s Incomplete from the Never Gone album and 2009 This is Us album closer Undone. Given that it’s the 20th anniversary of the Millennium album this year, Backstreet Boys performed lots of tracks from that record. It was a treat to hear lesser-performed gems such as Don’t Want You Back and Don’t Wanna Lose You Now. Of the newer songs the Country-tinged No Place sounded fantastic (and it should have been a huge hit) and the acapella Breathe, performed by the group on a high platform at the front of the catwalk, showcased just what incredible vocalists they are.

The second half of the set was packed with hit after hit. I’ll Never Break Your Heart, All I Have to Give, Everybody (Backstreet’s Back) and We’ve Got It Goin’ On gave the fans a whirlwind trip down memory lane, while the soaring ballad The One and the classic I Want It That Way encouraged very loud sing-a-long moments. For the encore Backstreet Boys performed the fantastic recent single Don’t Go Breaking My Heart and closed their set with the stomping Larger Than Life.

As the group left the stage, the audience erupted into loud cheers and honestly we could have watched Backstreet Boys all night. With 26 years of performing experience under their belt, the group are seasoned pros but they’ve lost none of that magic that helped them conquer the world. Their live show was energetic with barely any pauses other than to speak to the audience and the vocals were superb. With a stellar back catalogue of huge pop tracks, Backstreet Boys are a timely reminder of a time when pop music was at its finest and for my money, they are still one of the best live pop acts around.