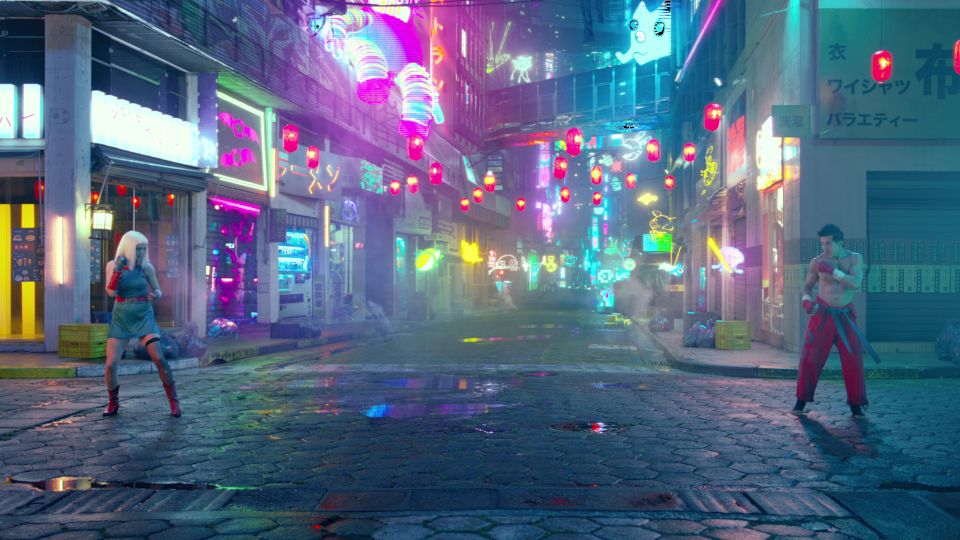 Black Mirror is famous for its weird take on how technology can affect our lives for better or worse and season 5 is no different. Striking Vipers, the first episode in the new season is as much about relationships, fidelity and sexual identity as it is technology. In this case, the technology merely serves as a key that unlocks a door (metaphorically) that the characters didn’t even know existed.

Danny (Anthony Mackie) and Karl (Yahya Abdul-Mateen II) are best friends and we first meet them in their youth on a night out. Danny meets Theo (Nicole Beharie) and these early scenes ooze sexy cool. Theo’s character seems the perfect fit for Danny and she isn’t even overly bothered by their late night gaming sessions as they play a fighting game called Striking Vipers together. Danny plays as Lance and Karl as Roxette (remember this point, it’s important!)

Fast forward and we jump to Danny’s 38th birthday party. He and Theo are now married, trying for a second baby and quite frankly Danny looks like he’s dying inside as the mundanity of middle-class life is getting to him. Enter Karl who hasn’t seen Danny in years. Karl gifts Danny a copy of the updated Striking Vipers game complete with a virtual reality kit and this is where things start to get interesting.

With his family in bed, Danny starts up Striking Vipers and is transported into an ultra-realistic virtual world. Inside the game world, he is inhabiting the body of Lance and in front of him is Karl who is in the body of Roxette.  After a brief bit of banter, they get down to fighting and then shortly after they get down to something else entirely. You see in this virtual world you can get up to anything you want to, Danny and Karl decide to get down and dirty with each other whilst in their avatar bodies.

This is confusing for the boys and at first, they blame it on being drunk and try to laugh it off but shortly after they are in each others arms again (inside Striking Vipers) and their passion levels increase with Roxette blurting that she loves Lance. The two become addicted to their in-game rendezvous and their obsession becomes damaging to their real lives. Danny loses all interest in Theo, and Karl is unable to perform in the bedroom, or anywhere else except for in the game.

This clearly weighing on their minds and Danny arranges to meet Karl so that they can kiss to find out if they are really attracted to each other in real life or if it’s just inside the game. After a brief kiss and a rather lame punch up they decide that they aren’t gay but that they are still both drawn to the game.

In a bid to save his marriage Danny stops playing the game altogether but is miserable. He finally confesses to what’s been going on when Theo accuses him of having an affair and they come to an understanding and create an open relationship. Once a year Danny and Karl are allowed to indulge in whatever fantasies they have over each other in the world of Striking Vipers whilst Theo gets an evening pass to go out on the pull and have one night stands.

I found this episode and the themes it explored really interesting. The acting was a bit wooden but it didn’t detract too much from the overall feel of the episode. I could genuinely feel the internal emotional battles going on inside the heads of Danny and Karl. In their view, what they were doing felt wrong but at the same time so right. I think it’s a credit to Theo that she didn’t just give Danny the boot as it must be hard to learn that your husband is cheating (is it cheating if it’s in a game?) on you with his best friend who plays as a girl in a virtual world!

If you want to watch some TV that isn’t simply going through the motions I would recommend you go and give Black Mirror season 5 a watch.

Advertisement. Scroll to continue reading.
In this article:Black Mirror, Netflix