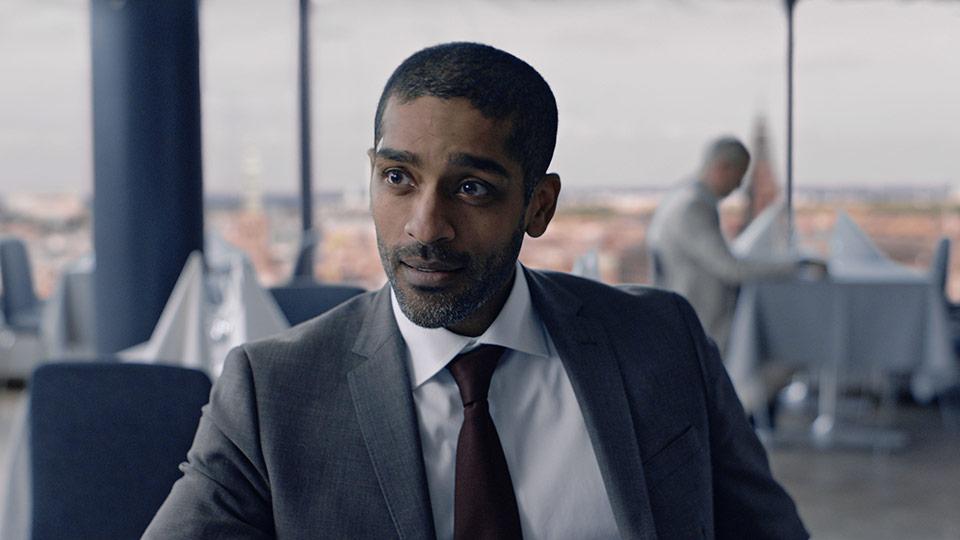 I caught up with Alexander Karim, star of Walter Presents‘ new thriller, The Lawyer, to talk about the success of the show, Nordic Noir in general, his fall-back career options – and why you shouldn’t pick a bar-fight with him.

But I start by wishing him happy birthday – the youthful-looking Swede turned 43 just a day or two earlier. It seems he showed characteristically Swedish restraint.

“Thank you. I had a great day with the family. And then in evening I had a show to do – I’m in a theatre play at the moment. But it was a good day – a busy day!”

I’m amazed he found the time, to be honest. In addition to treading the boards currently, he’s busy with TV work (season 2 of The Lawyer is underway and another series just completed); and yet still finds time to write not one, but two novels – one for adults and one for kids.
I asked Alexander about his new show, The Lawyer – co-created by Hans Rosenfeldt who brought us The Bridge and ITV’s Marcela, featuring Anna Friel – and I comment upon its authentic feel.

“Yes, it’s co-written by Hans and Jens Lapidus who did Easy Money (a 2010 Swedish film, based on Lapidus’ own novel of the same name). He’s a lawyer by profession – one of the biggest in Sweden – so we had a lot of know-how for the script. I went to the premier a year and a half ago, and it was very well received.”

He’s not wrong – The Lawyer (Advokaten in Swedish) was nominated for both Best Television Drama and Best Actor for Alexander at the Kristallen, Sweden’s television award. I ask him what it is about Nordic Noir that captures our imagination – particularly here in the UK. Alexander has a theory.

“People’s view of Scandinavia is that it’s a safe haven. You don’t really expect crime to happen there. So, it’s the contrast between that image and the dead body in the woods that captures people. There’s crime in Sweden as much as anywhere – but these crime stories are often set in the archipeligos (where the posh houses are). And it’s the contrast between the blood and gore of crime and those beautiful neighbourhoods that works so well.”

Some of you might recognise Alexander as Ihab Rashid in Tyrant, a three-season show that aired on Fox between 2014 and 2016 about the Al-Fayeed family in the fictional country of Abuddin.

“That was an incredible ride. It was one of those shows where you don’t really know what’s happening from one day to the next – I got cast on the Thursday and started shooting on the Monday. We turned up in Tel Aviv for season one without knowing the script or anything. But it was a great experience. Season 2 and 3 were shot in Morocco and Budapest.”

Indeed, he’s a well-travelled man. Alexander spent much of his formative years learning his craft in Los Angeles with his brothers, Baker and Othman (who are successful directors in their own right).

“I was nineteen – back in the 90s – and there’s something about the States that pulls you as a young actor, because of all the Hollywood movies. But for me it was more about a change of scenery. Whenever young (Swedish) actors ask me today about where to train, I say there are tons and tons of good schools. I’d usually recommend they go to BAFTA or LAMDA in London and work on their English. The market is so global now – it’s important to learn another culture and work on their language skills.”

The Karim boys are doing well – Mum and Dad must be proud!

“Yeah, or worried! We really should have another career to fall back on in case the film industry goes wrong! Our Mum loved movies – by the age of five I’d seen Citizen Kane, Ben Hur and all the Hitchcock movies. Everything from the great classics to Zoltan: Hound Of Dracula and Plan 9 From Outer Space.”

Alexander is a second-degree black belt in Tae Kwan Do, and lists boxing as a hobby. It sounds like he can handle himself if the going gets tough.

“The good thing about being a second-degree black belt is that you don’t need to prove it. I teach that to my three kids all the time. I used to teach in classes, too. It’s about how you handle yourself; you rarely get people walk up to you wanting to fight, because they instinctively know that you can look after yourself – it’s all about confidence.”

So, what’s next for Alexander?

“We’ve just finished shooting a new show called 20/20 for Yellow Bird; and then I’m in Finland for season two of The Lawyer. And I recently became an author – I have a book coming out in September, and a kid’s book that I wrote with my wife also in September.”

Actor, author, Tae Kwon Do expert – is there nothing this man can’t do? And if he continues to find excellent vehicles like The Lawyer to show off his talents, I’m sure he’ll do his Mum proud

The Lawyer screens on Channel 4 in June – on the strength of its opening statement and the evidence so far, I’d say it’s stated its case remarkably well.

Walter Presents: The Lawyer premieres on Channel 4 on 23rd June at 11pm. The full boxset will be available on Walter Presents via All 4 immediately after transmission of first episode.

In this article:Alexander Karim, The Lawyer, Walter Presents