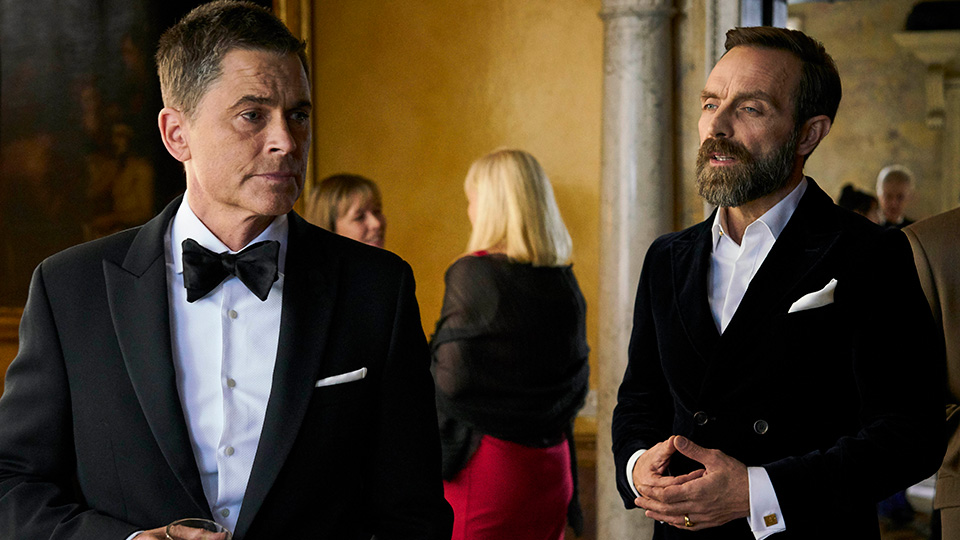 Rob Lowe made his debut as Bill Hixon on the first episode of ITV‘s new crime drama Wild Bill tonight.

If you want to avoid spoilers for Wild Bill, stop reading this article now.

The episode opened with Bill involved in a car chase and throwing cabbages around a field in frustration. The action then cut back to a week earlier when Bill arrived in Lincolnshire with his teenage daughter Kelsey (Aloreia Spencer) and was introduced to the station he was going to be in charge of by DS Alex Blair (Steffan Rhodri).

As he entered the room to address the force, Bill found PC Drakes (Divian Ladwa) impersonating him. Bill quickly set out his agenda, reinforcing that technology and ‘running the numbers’ was going to be his way of reducing and solving crime. The force seemed sceptical but Bill insisted it works.

Following the briefing Bill was introduced to ACC Lydia Price (Anji Mohindra), who made it clear that she wasn’t thrilled with his presence at the station, especially as she’d been doing his job in the interim.

Bill dropped Kelsey off at her new school and was pulled over for speeding on his bicycle on his way home by PC Sean Cobley (Anthony Flanagan), an officer he’d humiliated earlier for not being able to arrest a satellite dish thief. As he collected his speeding ticket, Bill gave Cobley some intel about how to catch the thief.

That information proved very useful as Cobley and the team did track the thief down and after a confrontation, managed to arrest him. Cobley also discovered a man singing Foreigner’s I Want to Know What Love Is to a severed head in his fridge!

The next day Bill spoke with a local journalist as he walked around the town and then paid a visit to Angie (Susan Lynch), the mother of Melissa Stainsford (Hollie Dennard Woolhead), whose head was found the night before. He informed her that her daughter had been found but left the grisly details of her death out.

Bill teamed up with DC Muriel Yeardsley (Bronwyn James) to try and solve Melissa’s murder. They visited the pathologist to see what she’d found out after examining the head. There were traces of cannabis in the hair of the severed head and it looked like her head had been cut off with a sharp weapon like an axe.

Angie had a coffee with Yeardsley and urged her to tell her how her daughter died. Yeardsley tried to keep the conversation on track so she could find out potential suspects and Angie offered up Mel’s boyfriend Marek Rudnicka (Julian Kostov). Yeardsley then told Angie how they believed Mel had died, leaving her horrified.

Yeardsley and Bill paid Marek a visit and Yeardsley showed Bill that she was no pushover, and that she spoke fluent Polish. Marek insisted that he had nothing to do with Mel’s disappearance and appeared shocked when Bill informed him that his ex-girlfriend was dead.

After running through Bill’s algorithms, Yeardsley found a lead in Mel’s case. Accompanied by Cobley, she discovered a bunker full of old cannabis. Bill joined them to investigate and they pressed Marek for answers. He admitted he was running an illegal drug operation with Melissa and told Yeardsley that they did a deal for £300,000 with criminal Oleg Kraznov (Aleksandar Jovanovic). Suspicious as to where the money was, Yeardsley pressed Marek further and he handed over Mel’s £150,000.

Before going out to a function at judge Mary Harborough’s (Rachael Stirling) house, Bill and Kelsey were approached at their home by Angie. Kelsey invited Angie to babysit her while Bill went out.

At Mary’s function, Bill took her to task for letting the satellite thief out on bail. He then approached Oleg to talk about Mel’s murder and the drug operation but was distracted when he saw his car being stolen. Bill gave chase and while police arrived at the scene both he and Kelsey were sent a video of Bill attacking a former boyfriend of Kelsey’s.

Bill returned home where he had a tense conversation with Kelsey and it was revealed that she’d tried to kill herself. He admitted that he agreed to quit his job in the US after the department paid off the man he attacked.

The next day Bill was suspended after the video circulated and he responded by quitting. He asked Yeardsley who sent the video around after she told him it was distributed by someone inside the department. She wouldn’t reveal who it was but when he guess Lydia, she confirmed he was right.

Yeardsley also revealed that she’d found out that Mary had been cautioned for cannabis possession and she had been dealing with Mel. Mary said that Marek turned up to meet her two days after Mel disappeared and he had scratches on his face.

Bill went to find Marek and followed him to a restaurant and Yeardsley found a connection between Marek and Oleg. A fight broke out and Bill stepped in to stop it, dragging Marek outside and getting physical with him in a bid to get some information out of him. Marek eventually admitted that he slept with another woman and Mel had found out.

Returning to the bunker full of cannabis, Bill was talking to Yeardsley on the phone when he spotted the wind turbines in the field and realised what had happened. Melissa had thrown herself off a wind turbine and the blades cut her head clean off.

Bill told Angie what he’d found out and left her sobbing at home. Later in the car with Kelsey, they received a disturbing voicemail from Angie and Bill realised she was going to try and kill herself the same way Mel had.

He raced to the wind turbines, scaled to the top of the one where Angie was and talked her down. It was revealed that Angie slept with Marek to show Mel he was a bad guy but it ended up causing Mel to leave home. Bill talked Angie down and she collapsed, telling him she’d taken an overdose. Kelsey called an ambulance as Bill stayed with Angie.

Following that ordeal, Bill packed up his belongings ready to move back to Houston. Kesley intimated that she didn’t want to move and told Bill he’d reminded her of her grandfather as he was a cop in the UK. Maybe they’re not going anywhere after all?

Wild Bill continues on ITV at 9pm on Wednesday.