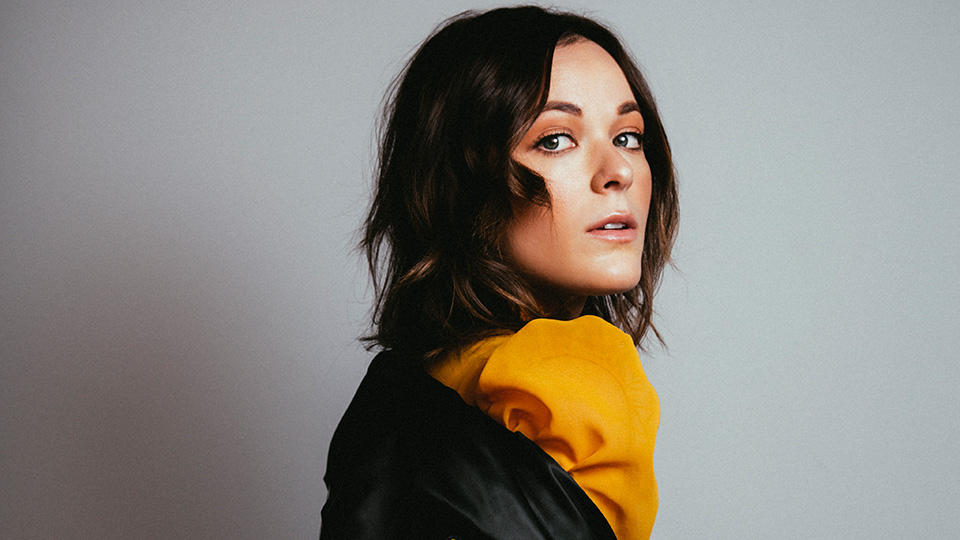 Jillian Jacqueline has been putting in the time to build a fanbase in the UK and that hard work is paying off.

She was recently here supporting Kip Moore on his Room To Spare Acoustic Tour and she squeezed in her first UK headline show at the end of the run at Hoxton Square Bar. Her two EPs Side A and Side B have picked up plenty of acclaim and established Jacqueline as a rising star to keep an eye on.

Before her headline show, I sat down with Jillian to talk about her recent wedding, find out where she’s at with new music and to talk about returning to the UK with her band in the future.

First of all congratulations on getting married! I did it myself a few years ago and it’s a pretty big deal isn’t it?

Isn’t it? Did you feel instantly different? Or did you feel the same?

I didn’t really feel any different!

OK! I think just because there was that proclaiming this in front of this whole room of people, there was sort of a shift of like, ‘oh this feels really good!’ It feels deeper and more comforting and more safe than it had before. Obviously we travel together so we’re always together but I think it just feels more like this commitment that you can’t really break. It’s really special. I love that we just did it and committed, and it feels crazy to call him my husband but he is my husband.

I spotted you both side of stage at Kip’s show on Thursday, right at the end…

Oh yeah! Did you see (Bryan) jump on the floor to get a picture? (laughs).

All of a sudden I looked down and he’s on the floor trying to get this cool shot of Kip and the audience and I was like, ‘you’re crazy!’. That was great!

Being married and taking that step must be impacting on the music you’re writing now. Side B came out last year, Side A the year before… are you working on Side C or a new project right now?

I’m always trying to find a way to give myself time to process things before I actually write it into a song, you know less reactionary and more what I really feel about this, what’s my angle on it? What’s my perspective? There’s definitely a lot of themes coming up with the finality of finding your true love. What does that mean? What does love actually mean? What is it about? What does commitment look like? I do struggle with looking into the future too much sometimes and getting riddled with anxiety and fear of the future. I think I’ve been finding ways to understand that as I go further into this relationship with Bryan and in my career too; where my career is and where it’s going. That search for happiness is always still there and finding joy in the present moment is always the struggle so I think the themes are somewhat the same… you know who I am and what it means to be me in these circumstances. I think I’m growing more comfortable with love and being happy because I think in the past that’s been a little bit of a struggle for me.

I picked up on that theme of questioning the importance of the future in Priorities. I think I drunk tweeted you actually on my birthday from my Air BnB in Rome as I was listening to the song and thought, ‘yeah, when did the future get so damn important?’.

Oh my God! That’s amazing! (laughs) Seriously I have to remind myself of that all the time. By the way Rome is amazing, I studied abroad there and I loved it. I want to go back so badly!. There are a couple songs that have popped up that I’ve written and we’re compiling a whole list of them now in preparation for the full album. There’s a couple I’m going to play tonight and I’ve been getting really, really great feedback about one in particular. It’s something I’ve never really tackled… the theme of it… I’ve never written anything like this before but it’s this very grand sort of love song and it looks at past relationships and then the one relationship altogether as this journey… as one thing and you don’t have to be pissed off that you had a bunch of heartache and messed up a few times and just feeling peace about that.

I get to listen to so much music but there’s something about yours that always feels like it was written for me. I went through the whole of Side B during the course of the last year…

(laughs) I’m like your fortune teller! That’s awesome. I hope that you can relate just as much. It’s been really telling the last two years performing all these songs live and (seeing) what really speaks to people when we get out there doing a live show. There is stuff like Friends that I love and it’s such a big part of my personality but when we would play live shows it wasn’t necessarily the song that everybody gravitated towards it more stuff like Tragic. Paying attention to that helps really figure out how do we make the full record represent what I do as an artist in the best way. I’ve learned a lot in the past two years and it’s really helped me figure out how to move forward. I think the full album will be hopefully be a perfect representation what Side A was and what Side B was and then also what the next step is.

I know you’re keen to get back over to the UK with your band. Are there any plans for that right now?

We want to do it and Kip always mentions this too, it’s so financially tough to make it work for us. Especially at this point in my career. We have acoustic dates opening for Kip here. We’re doing The Long Road Festival and then we’re doing shows with him here in September. I think we’re doing some Germany things and we might expand on that, I’m not sure yet. My hope is that I can bring the band over for C2C. I would love to be able to do that so we just have to figure that out.

Yes, I know! I remember we played the Spotlight Stage in the O2 Arena and I couldn’t even believe then people knew God Bless This Mess and songs like that. Who knows? We’ll see what it feels like next time.

Jillian Jacqueline’s Side A and Side B EPs are available now. Watch a live performance of Tragic below: