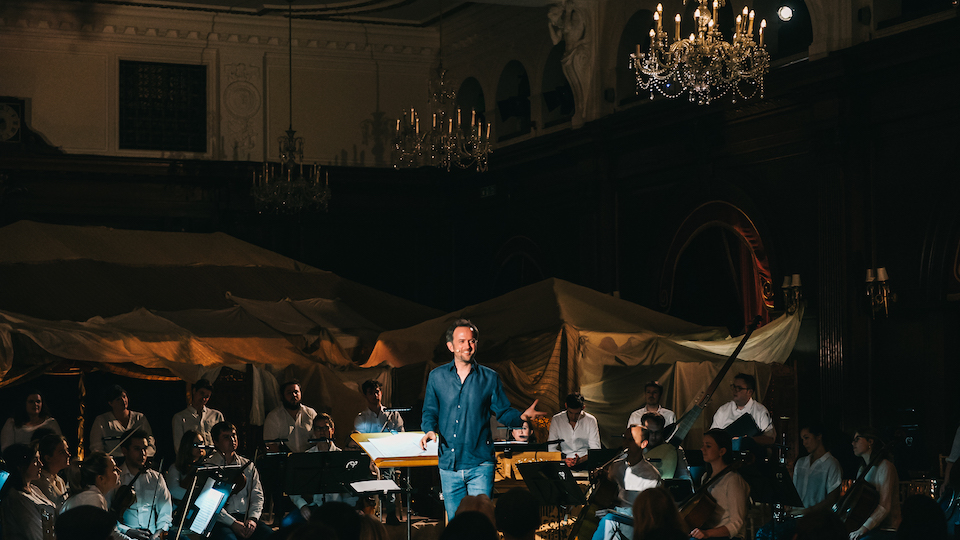 First performed more than 250 years ago, Handel’s Messiah has become one of the world’s most frequently performed choral works. For anyone unfamiliar with Handel’s masterpiece, The Little Orchestra provide a theatrical style concert to gain a better understanding of the narrative. Pitched on the promise of appealing to a typically non-concert going audience, The Little Orchestra’s desire is to ‘dissolve barriers between audience and music’.

Conductor-come-compere Nicolas Little is an affable host intent on bringing to life the meaning behind the oratorio’s biblical verse, revealing context from both the Protestant librettist Charles Jennens’ and Handel’s personal lives, in order to further explain Handel’s reasoning behind various instrumental techniques throughout the composition.

Porchester Hall’s shining chandeliers, crimson velvet curtains and oak panelled walls make for an opulent setting. The Little Orchestra further dress the space to reflect religious imagery in the text, most noticeably a crumpled white sheet fixed above the choir’s heads giving the impression of a white cloud in transit. The company clearly firmly believe that ‘God is in the detail’ as various props are scattered around the bar and seating area with hints of the lyrics we’re about to hear, for example, a book upon a throne, locked with seven seals, which is a symbol taken from the finale of part III (John’s Book Of Revelation). Their commitment to the event’s theatrical feel is admirable but, sadly, the themed pop-up food and cocktail menu did little to add to the experience (lengthy queues and slow service served only to impede enjoyment).

Still, we were here to enjoy the main event: Messiah. Split into three parts, like a three act opera, Part I was previously performed by The Little Orchestra last Christmas seen as the story focuses on the promise of Jesus coming to save mankind, the nativity story and Jesus’ actions on earth. Part II shifts to Jesus – the ‘lamb of God’ – as he faces his fate. Torture, crucifixion, death, resurrection and ascension into Heaven. Part II culminates in the famous, glorious Hallelujah while Part III looks to mankind’s future and, eventually, Judgement Day.

The acoustics in Portchester Hall, considering its ample high ceilings, were pleasantly warm. The full choir and orchestra, taking a dressed-down approach in white shirts and denim jeans, are without doubt an extremely talented collection of young performers with faultless performances from the soloists. However, some may find the explanatory interruptions from Nicholas Little irritating. The information is imparted with the good intention of helping us feel a connection with the music. Yet, at times, Little’s interjections were jarring as they prevented the listener entering a true state of reverie throughout the musical journey. With a full 90 minutes passing before we reached the interval, it’s perhaps a little too lengthy an ambition to embark on this concert-come-lecture. The choir and orchestra’s performances were superlative but overall the approach served to test even the average concert goer’s patience.

In this article:Porchester Hall, The Little Orchestra