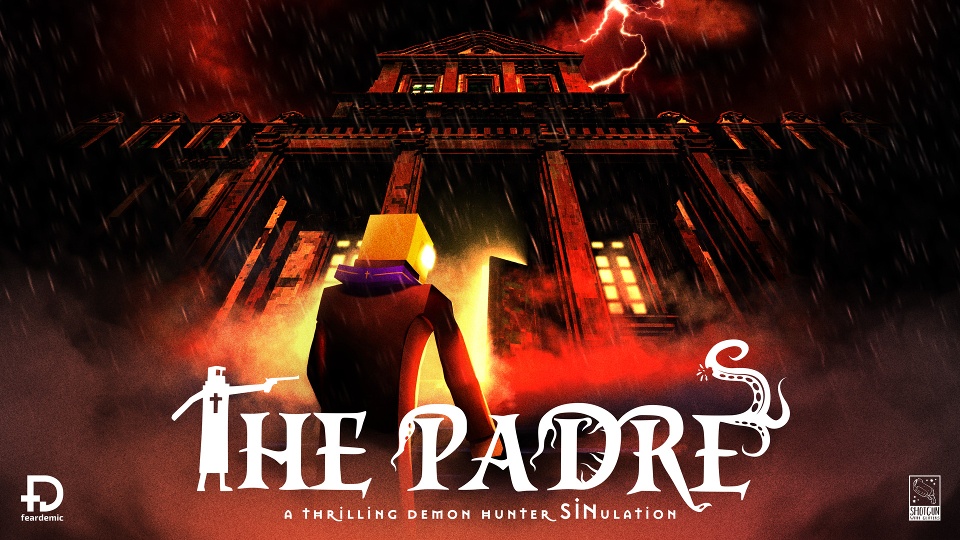 This is the Bible of Father Murphy. He fought for many years to hold the darkness at bay, but at the peak of his power, evil tempted him and he could not resist…In his last battle, he was shot with his Bible in his hand. Murphy’s fading soul reached out one last time for material existence and he got one last chance from the Lord. His essence lingers around this item and with his remaining glimpse of sanity, he helps his possessor with advice. Guard the book with your life! One last thing: he can be annoying.

Why did I include this lengthy quote at the beginning of my review? Simply put, because it perfectly encapsulates the experience of this game; dark, humorous, creepy and self-aware. Picture if you will the original Resident Evil with overtones of the Evil Dead movies all in Minecraft style, got it? That’s The Padre.

Watch The Padre launch trailer below:

From the very beginning, this game manages to retain its sinister creepiness without ever feeling too serious. Our star is, as the name suggests, a priest, more akin to Father Karras than Father Ted, who is rendered emotionless by his enormous featureless white block head. The scene really does seem to have been built in a game of Minecraft but that surprisingly does not ruin the atmosphere. In fact, allied with the ‘tank controls’ that I will come on to later, it sparked nostalgic fervour for me as I remembered the many hours I spent aged 10 playing Resident Evil with the lights off (both for atmosphere and to keep my parents from forcing me to sleep). I would suggest however that, for some without that background, the graphics may be an instant turn off as they do create some distance between the player and the game. At no point did I feel genuinely unsettled and I was always conscious that I was playing a game. If you’re looking for an immersive horror experience then I would suggest looking elsewhere.

The plot is simple; a Cardinal has gone missing and it is up to the Padre to enter the haunted mansion, solve puzzles, complete tasks, dispose of enemies and rescue him. The puzzles you will be required to complete are all relatively straightforward and should pose no real challenge to any experienced gamers. The difficulty level increases appropriately throughout from the more obvious ‘give the doll to the story reading zombie so she’ll drop a key to a cabinet’ to some of the more off the wall tasks in the late game. Where the challenge often lies is working out where there is a puzzle to solve and where the game is just wonderfully detailed; I spent at least twenty minutes trying to work out what to do with a suit of armour that would move its head and watch me as I walked by, but then immediately turn away as soon as I turned back to it, much like Boo in the Super Mario games. As it turns out, there was nothing special about this, it was just an addition to enhance the creepiness. It certainly succeeded there!

Much of the artistry of this game is drawn straight from classics of both the gaming and movie world; the mansion itself takes inspirational tropes from the Universal and Hammer horror series where every dark corner, painting, mirror and creaky floorboard could contain an enemy just waiting to pounce. The lighting effects really do enhance the atmosphere, particularly when you are using the Padre’s own oil lamp. The voice acting is smooth and the James Bond-esque one-liners delivered by the hero add some light to the dark overall feel. Clearly there are nods to survival horror games of the Resident Evil era including the aforementioned control system and tilted overhead view, however, in being self-aware and retaining a sense of humour this game sets itself apart from them; it is a tribute, not a successor.

That is not to say that the Padre doesn’t come with its share of problems however. The control becomes a serious problem as the game progresses. What begins as a charming throwback becomes increasingly irritating as you go further into the mansion and face more difficult monsters. Even the first such enemy, a zombie in the first corridor, took me three attempts to pass as a result of the control issues. It was unbelievably difficult to land proper hits and the lack of any life bars means that you really are attacking blindly with your melee weapon. The camera angle and tank control means that it takes you time to ensure you’re facing in precisely the right direction and by the time you are you will almost certainly have taken several hits, it would appear that this control style was left in the past for a reason. If I have to see that darned post-death mirror room again I think I’ll scream.

The exploratory puzzle solving is also somewhat problematic. Instead of simply having one button designated for interaction and an indicator of what can be interacted with, the Padre utilises a system whereby specific button indicators will appear above certain items, pressing that button will interact with the particular area. In theory this seems like a good idea, but in practice I found that it became increasingly annoying as I moved around in tiny circles next to items trying to make the icon appear and then quickly pressing the correct button before it disappeared. I know that this system has been used in other titles but here it really isn’t responsive enough to be of use and it feels as though the character detection area is too small, particularly when you realise how many suggested interactions are dead ends (as in my encounter with the suit of armour).

A further minor complaint, I personally felt that the use of vibration through the controllers was overused and that meant that far from getting an early warning of something important or dangerous, I began to ignore it and attempt to use only what I could see. Given the graphical style this did mean that my ability to really strategise was minimised and I was forced to play in a more reactionary way.

View some screenshots from The Padre in our gallery:

Overall, The Padre is a charming game, one which I am sure will delight many survival horror fans, particularly those whose interest was piqued at the beginning of the genre. The control system is a real let down and does sorely detract from what could have been a unique and enthralling title. If you are interested in this style of game, definitely give it a go, but I won’t be counting this amongst one of the many hidden gems in the Switch library.

The Padre was reviewed using a digital code supplied by the publisher.

Advertisement. Scroll to continue reading.
In this article:Feardemic, Nintendo Switch, PC, PS4, Shotgun with Glitters, The Padre, Xbox One