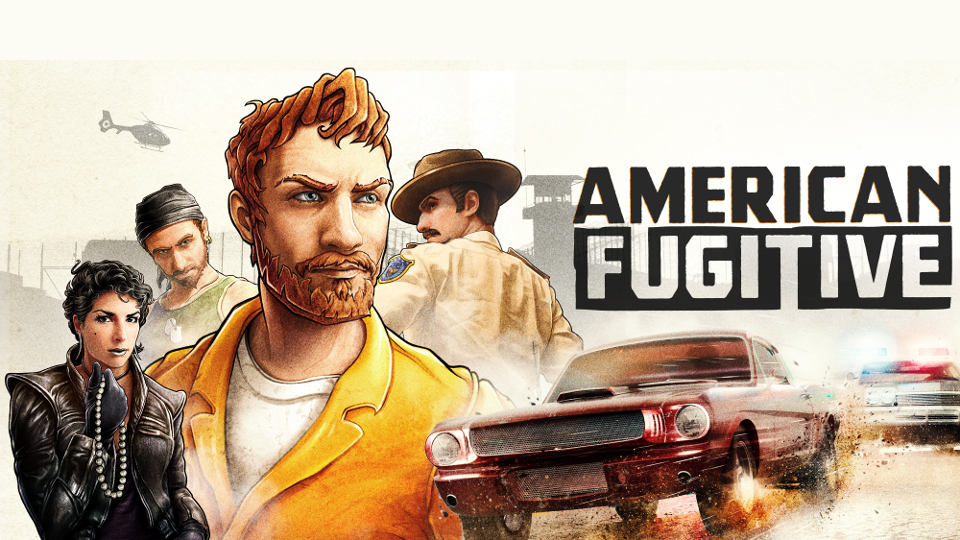 American Fugitive is developed by Fallen Tree Games with Curve Digital handling publishing. The game is inspired by the classic Grand Theft Auto games and is most similar to GTA: Chinatown Wars. I’ve been checking it out on PC to see if it’s worth your time.

The game is set in an American town called Redrock County and puts you in the shoes of a man named Will Riley. At the start of the game he gets a call from his father in the middle of the night asking him to come over. Will does just that but finds his father dead. If that wasn’t bad enough, Will also finds that he’s been framed for the murder and ends up in jail. This is soon followed by his escape and that sets Will on a path of vengeance to track down his father’s murderer.

The game world is realised in 3D but the action is viewed from an isometric perspective. Graphically it looks rather nice and there’s a lot of detail to the open world. I thought that the lighting effects in particular looked fantastic. Upon escaping, Will finds himself being pursued by the cops. You need to think fast to get away safely and then do your best to stay one step ahead of them. This involves making contact with people you know and then getting involved in the criminal underworld.

I must admit that although I’ve played all of the GTA games I never get very far with the missions. This is because I get too distracted by all the fun I can have causing chaos, messing about and running from the police. I found myself doing just the same in American Fugitive.

Within minutes of escaping prison I had burgled a shed for supplies and snatched a change of clothes from a washing line. That was enough to blend in while I made my way to my first contact. What followed was a series of simple fetch quests. I soon got bored of those and decided to have a little fun. Speeding along the wrong side of the road I ended up in a head on collision with a police car. I jumped out, charged at the police officer who was shooting at me and beat him to the ground with my fists. I then dragged him behind some bushes and stole his uniform, pistol and baton.

So now I looked like a police officer, I jumped in my new police car and drove off sirens blazing. It didn’t take long before I stumbled upon a police station. I parked out front and simply strolled inside. A quick scout of the building saw me uncover a stash of shotguns and handcuffs. Armed to the teeth I then drove around the town causing mayhem and the previously innocent Will Riley soon had a body count in double figures! When you take matters into your own hands like this the game likes to punish you by clearing out your inventory if (when) you get killed.

I’ve found that just messing about and causing carnage to be the most fun parts of American Fugitive. Trying to play the game by obeying the law just isn’t possible. Even when I tried my best to be a good citizen the police were never far away. They have an insane ability to just turn up almost immediately when you do something wrong. The game uses a five-star wanted meter that fills up based on how naughty you’ve been. The more stars you have the bigger the police response. The game does make it easy though to escape the cops. Running through a few gardens to get out of view or grabbing a change of clothes is usually enough to get away.

Driving the various vehicles in the game is fun but they are easy to lose control of. Also due to the way the camera works it’s near impossible to drive at speed because you can’t tell what is coming up. At low speeds it’s fine but as soon as you put your foot down you know a crash isn’t far away. Often the slightest scrape on another car is enough for the police to appear. I did find this to sometimes be a little inconsistent though and I’ve crashed into some police cars without them noticing.

View some American Fugitive screenshots in our gallery:

One of the cool features of the game is the way it allows you to break into any building. Before you do it’s possible to walk around and peer through the windows to see if anyone is home. After that you can choose which door or window you want to break in through. This usually sets off an alarm giving you a limited time before the cops arrive. Once inside there’s a mini-game of sorts where you get to see the floorplan of the building. You can then move around the rooms and search them for loot. At times you’ll find someone inside and it’s up to you what happens next.

Completing missions gets you cash which can be used to unlock new skills. There’s plenty of choice including things like more health and better stamina. The missions themselves do become repetitive and usually have nothing to do with what Will is actually trying to acheive. They seem to exist mainly to pad the length of the game out which is easily going to keep you busy for at least 10 hours. I was a little disappointed that the conversations between missions are just text-based without voice acting.

Overall, American Fugitive is a fun game that is sure to appeal to fans of games like GTA. The main story and missions do tend to drag after a while but as a game to jump into for short bursts it can be a riot. If you don’t take it too seriously then there’s plenty of fun to be had.

American Fugitive was reviewed using a digital code supplied by the publisher.