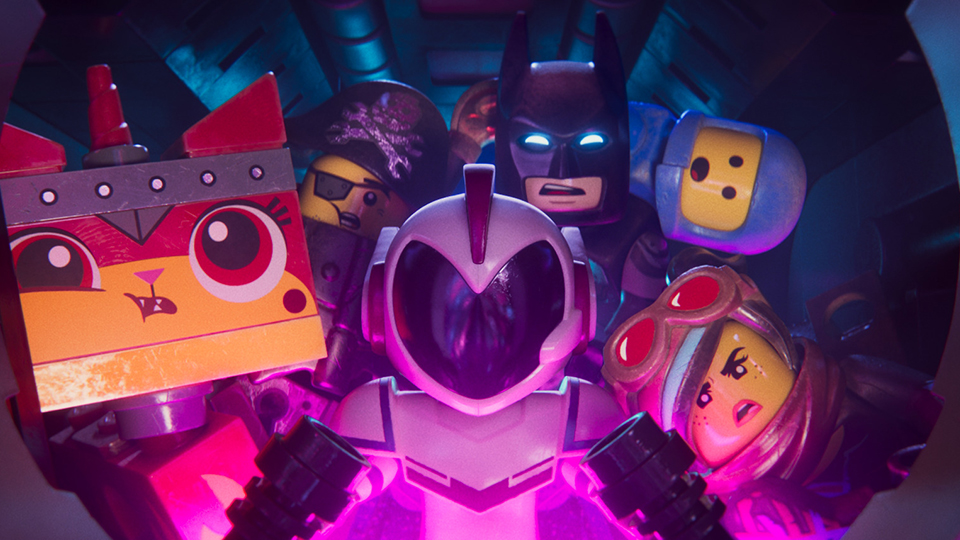 We’re four movies into The LEGO Movie franchise, and you will either be delighted or dismayed to learn that they are sticking to the tried and tested formula. Stylistically and thematically there is absolutely nothing new about The LEGO Movie 2: The Second Part. It’s more madcap animation, dazzling visuals, annoyingly catchy songs, and so many jokes per minute you couldn’t possibly catch them all in just one watch. To summarise: I loved it.

Picking up immediately after the first film ended, the citizens of Bricksburg – which as we know is the basement playroom of Finn and his father – are invaded by DUPLO aliens. This is because Finn has invited his little sister Bianca to play with their father’s LEGO collection. This plays out as an intergalactic war which Emmet (Chris Pratt) Lucy (Elizabeth Banks) and the rest of the gang simply can’t win.

We then jump to five years later, and Bricksburg has become a corrupted and destroyed wasteland, renamed as Apocalypseburg. When Lucy and all of his friends are abducted and taken to the Systar System, Emmet teams up with Rex Dangervest (also Pratt in a hilarious and affection piss-take of his on-screen persona) to rescue them.

Once again the level of visual wit and invention on display is mind-blowing. The animation is truly incredible. There is a brilliant chase sequence early on in the film where they reference Mad Max: Fury Road. Not what you’d normally expect from a kids film, and it will definitely be lost on younger viewers, but the big kids among us will get a kick out of it.

The script written by Phil Lord and Chris Miller – who have ceded directorial duties this time around to Mike Mitchell – is a thing of wonder. The gags come thick and fast and increasingly surreal. It’s an almost dizzying experience keeping up with them all. The gentle skewing of superheroes, which they started in the first film, continues here and it remains one of my favourite elements of the franchise.

The scene where Batman establishes his credentials as the leader of the group by listing how many films have been made about him along with how many are in various stages of development had me howling. Lord and Miller are also not in the slightest bit afraid to put themselves in the crosshairs, with a terrific throwaway gag about the first film’s gender politics.

Song-wise there is nothing likely to have the same impact as Everything is Awesome, which in fairness does still feature quite heavily in the sequel. However, the duet between Tiffany Haddish’s Queen Watevra Wa’Nabi and Will Arnett’s Batman, called Gotham City Guys is absolutely brilliant.

As we have come to expect with the LEGO movies, there are lots of overarching themes and important life lessons to be learned. Lessons about empathy, growing up, sharing, and working together. It’s all very nice, but really we’re watching this film for the chuckles, and it delivers big time. Going forward with the franchise they might want to look at tweaking the formula. The Second Part did significantly worse at the box office compared to the original, and this was partly attributed to the films (and spin-offs) becoming indistinguishable. But right now everything is still…ahem…awesome. Just.

The Blu-ray release comes with a fairly decent selection of special features. If you so wish you can watch the film in Sing-Along mode. There’s also a feature length audio commentary with director Mike Mitchell, writers and producers Phil Lord and Chris Miller, and animation director Trisha Gum.

The disc also comes with a short Christmas themed film called Emmet’s Holiday Party. They Come in Pieces: Assembling The LEGO Movie 2 is a short featurette about the plot of the film, with interviews and contributions from all the main cast and crew. There’s also 12-minutes of deleted scenes, and a music video to the song Super Cool. Finally there are 5 short promotional videos which were produced to support the theatrical release.

John Parker
John is a freelance writer and film reviewer for Entertainment Focus.
Previous article
Batman vs. Teenage Mutant Ninja Turtles review
Next article
Can You Ever Forgive Me? DVD review