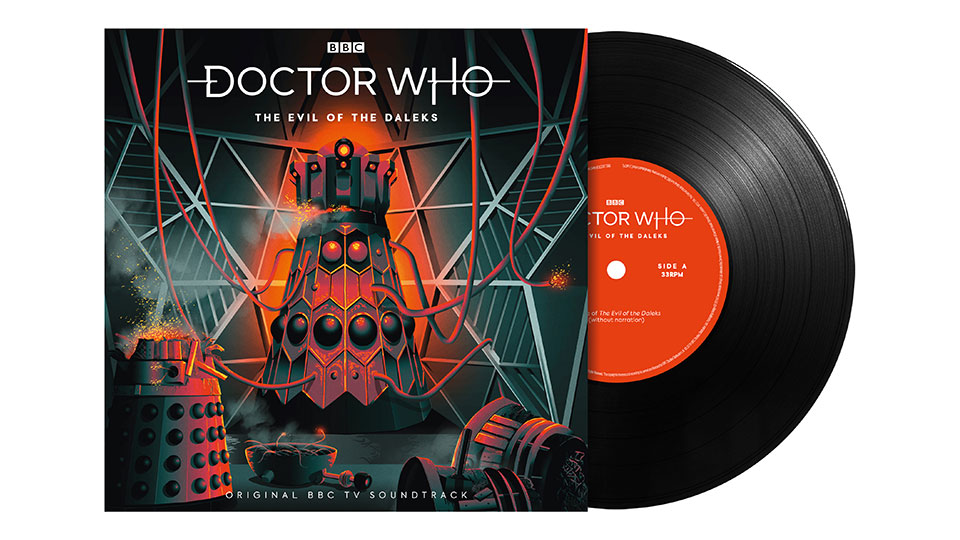 Doctor Who fans will be able to get their hands on a 7″ vinyl EP if they pick up the Deluxe Edition of Doctor Who Magazine from tomorrow.

The EP features rare and bonus tracks from The Evil of the Daleks, a 1967 production widely regarded as one of the greatest stories from Doctor Who’s classic era. The film recordings of all but one episode of this seven-part serial are lost from the BBC archive.

The tracks will not be part of The Evil of the Daleks boxset that Demon is releasing on 12th July 2019 so this is your only chance to get hold of them.

Marcus Hearn, the editor of Doctor Who Magazine, says: “I can still hardly believe it. An actual vinyl record – not a flexi disc – as part of the new issue! We’ve worked closely with our friends at Demon on this exclusive EP. I hope it will appeal not just to Doctor Who fans, but to anyone with an interest in the history and development of electronic sound design. We’re thrilled to include an item that has been specially made for us, and feel sure that this limited-edition pressing will become highly collectable.”

Ben Stanley, Head of Product and Marketing at the Demon Music Group, says: “This was a great opportunity to partner up with Doctor Who Magazine and promote our forthcoming Evil of the Daleks box set. Those who have already bought The Daleks’ Master Plan, Galaxy 4 or Destiny of the Daleks will know a lot of love has gone into creating these fan-led packages, and The Evil of the Daleks is no different. The 7” features some cool extra content which complements the box set. It will even fit in the box!”

The track listing for The Evil of the Daleks 7″ EP is:

Finale of The Evil of the Daleks (without narration)

Doctor Who Magazine issue 539 is on sale Thursday 30th May. The Deluxe Edition is available exclusively from WH Smith and store.panini.co.uk price £9.99.

Advertisement. Scroll to continue reading.
In this article:Doctor Who, The Evil of the Daleks