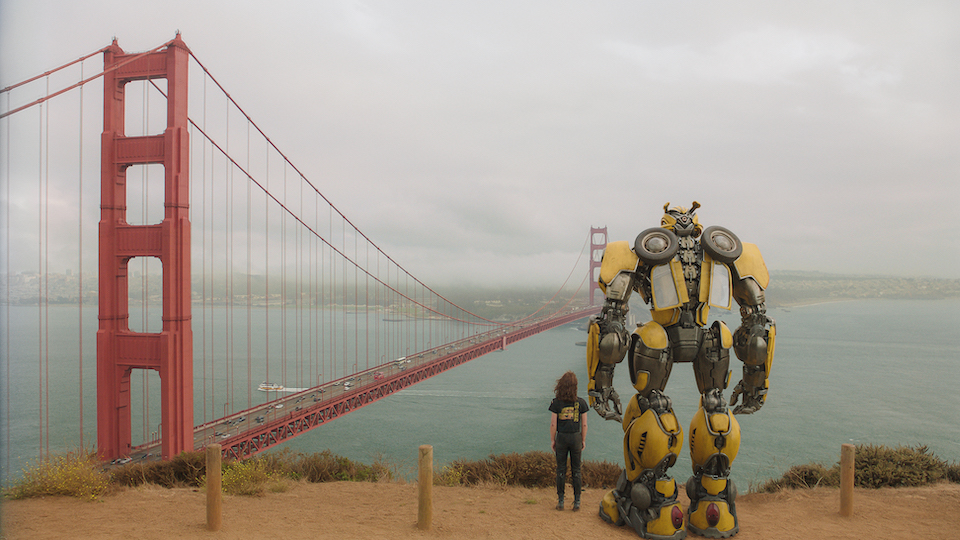 Like a lot of people my age, I’m an OG Transformers fan. The 80s animated series, the Hasbro toys, and of course, the original 1986 Transformers movie are all indelible parts of my childhood. When it comes to Transformers, this is my era. When the live-action franchise kicked off in 2007, I’ll happily admit that I quite liked the first film. It’s fun, enjoyable action cinema, with a few decent laughs along the way. The sequels however, with their mind-numbing mythologies, CGI orgies, machine-gun editing, offensive scripts, and sleazy direction, are – and I say this with absolute sincerity – crimes against cinema. Thank goodness we’ll always have the cartoons.

But no matter how bad the films got – and boy did they get bad – they made tons of money. It was inevitable that they were going to make more films, and sure enough Bumblebee was announced. A spin-off from the main franchise, set in the 80s, and telling the story of how everyone’s favourite Autobot VW Beetle ended up on Earth. I’ll be honest, I was not looking forward to this.

Then I saw the fantastic prologue sequence of Bumblebee, depicting the fall of Cybertron, and I was all in. Don’t get me wrong, I know full well that director Travis Knight has aimed straight for the 80s nostalgia sweet spot, but I don’t care one bit. This stunningly realised vision of the Transformers home world takes up about 10-minutes of the overall film, and those 10-minutes alone are better than the entire 761-minute running time of the five Michael Bay films put together.

As Cyberton is overrun by the Decepticons, the Autobot leader Optimus Prime sends Bumblebee to Earth to set up a base of operations where they can regroup. He is ambushed and critically damaged. His last act before his systems fail is to disguise himself as a VW Beetle. The film is then transported to California in the mid-80s, where Bumblebee is discovered by Charlie (Hailee Steinfeld) in an auto junkyard. Charlie is struggling following the death of her father, and Bumblebee’s arrival in her life comes at just the right time.

Instead of the usual “Bayhem” associated with these films, Knight and screenwriter Christina Hodson have crafted something far more intelligent, playful, and heartfelt, more akin to an Amblin film than the kind of things we’ve seen before in this franchise. And a lot of that is credit to Steinfeld. Her Joan Jett/Debbie Harry styled Charlie is arguably the first real character we’ve had in a Transformers movie.

She brings a depth and inner life to Charlie that makes her interactions with Bumblebee all the more affecting. He can’t talk, and has lost his core memory, so all of their communication is done through gesture and feeling, and her trying to teach him things. Whilst E.T. had Star Wars toys and The Quiet Man, Bumblebee has The Smiths and The Breakfast Club. Her relationship with this alien machine is sweet and funny, and thanks to Steinfeld’s terrific performance, utterly believable too.

But make no mistake, when it’s time to deliver the carnage, Knight knows exactly what he is doing. Making incredible use of cutting-edge CGI, the film gives us some pretty epic machine on machine action. The big difference with the five previous films, is that this time we can actually see what is going on. All the high-octane stuff is well staged and perfectly edited, and because the script and the performances have made us care about the characters – and Knight frames it from their point of view – the action actually means something.

The film is also frequently very funny, with most of the zingers going to John Cena’s Agent Burns, a macho government agent trying to track Bumblebee down. When his superiors get into bed with the Decepticons to help locate Bumblebee, he deadpans: “They literally call themselves Decepticons. That doesn’t set off any red flags?”

Bumblebee is a triumph of a film. An adorable buddy movie, liberally peppered with awesome 80s needle drops, brilliant gags, and ass-kicking action. The easiest way to look at it is like this: think of everything the Michael Bay films (mostly the sequels) got wrong…Bumblebee gets them all right.

There’s a lot of good stuff on the disc too, including the Sector 7 Archive, which is a motion comic featurette set a couple of years after the events depicted in the film. There are 20-minutes of deleted and extended scenes, as well as a selection of outtakes and improv scenes, mostly involving John Cena.

Bee Vision: The Transformers Robots of Cybertron is a short featurette looking at the Transformers from the original animation, and how they inspired the look of the opening scene. The final feature on the disc is Bringing Bumblebee to the Big Screen, which is a really good, in-depth making-of documentary, split into five separate featurettes.