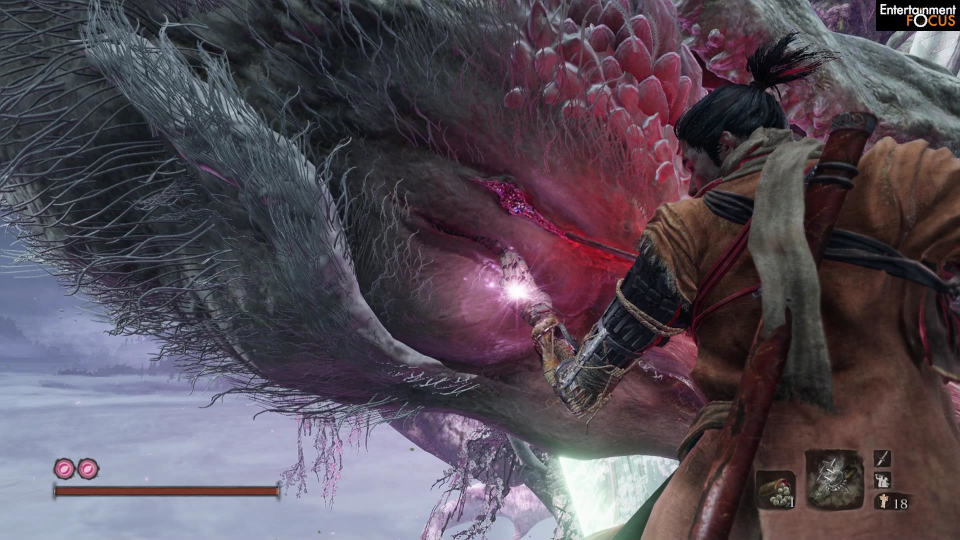 You’ll find the Divine Dragon lurking around at the end of the Fountainhead Palace area in Sekiro: Shadows Die Twice and you need to take him out in order to complete the game.

Although the fight might seem intimidating it’s actually one of the easier fights I’ve come across in the game so far.

The fight is split into two phases both of which are very different from each other.

In phase one, you are fighting loads of smaller mobs. They can gang up on you if you let them and they spit poison too which will take you down really quickly. The key here is to keep your distance. Before long you’ll see trees erupting out of the clouds. You want to grapple up onto a tree and land a flying deathblow on a target, ideally in the middle of a group. Your deathblow will not only take out your target but also loads of the surrounding trees too. In the video below you’ll see that my first deathblow takes out 75% of the vitality bar in one fell swoop. Now you can just pick off the stragglers and head to phase 2.

In phase 2 you are fighting the real Divine Dragon. The boss only has two attacks, a horizontal and a vertical sword swipe. To avoid the vertical you just need to keep running to the side, for the horizontal you need to jump when you see the red icon appear above your head.

To take him down you will be using lighting attacks. You’ll have noticed that some trees have spawned in front of him, look for the ones that are glowing and grapple to them. These ones are charged with lighting. Once you land you will be thrown into the air and you need to use this window to launch the lighting back at him, I play on Xbox and it’s right bumper. Simply rinse and repeat for this stage. Look for the trees with lighting on, jump in the air and release the lighting before you land.

It’s worth noting that it’s very easy to lose target lock in this fight, as I do in the video below, and waste chances to damage the boss so make sure you are locked on before releasing the lighting or you’ll miss.

Once his posture bar is full there is a final stage. The trees disappear and you have to survive for around thirty seconds before they reappear. Simply keep moving sideways and jumping when you see the icon. He will only be doing his same two sword attacks from before.

Once the trees reappear do the lightning thing again and he’ll drop. Make sure you lock on before releasing the lightning or you’ll have to repeat phase three.

Once he’s on the ground walk up his sword and deliver your deathblow to his eye.

You can see the fight in full in the video below: