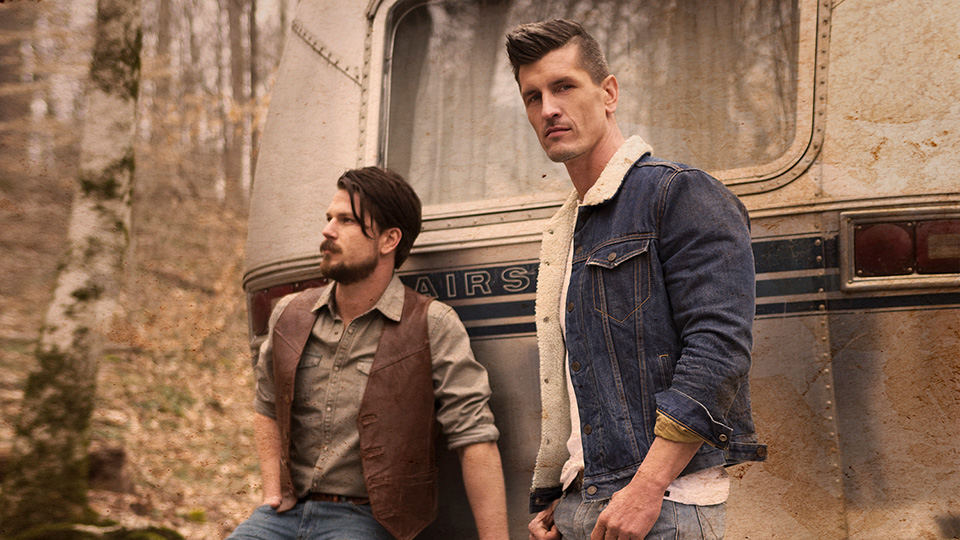 Canadian Country music duo High Valley have been winning over fans in the UK with their music since they made their live debut at C2C: Country to Country in 2016.

The brothers – Brad and Curtis Rempel – scored a huge hit with Make You Mine and their 2017 major label debut album Dear Life was easily one of the best records that came out that year. Since their first visit, High Valley have been back to the UK a handful of times and recently they released their new track Single Man.

I caught up with Curtis to talk about the new single, find out where the band is at with their new record, and to discuss their plans to return to the UK.

Hi Curtis, how are you doing?

I’m doing great. I’m enjoying a little bit of time at home in between the weekend’s festivals and all kinds of things like that.

You recently released your new single Single Man, which in terms of sound is a progression from your last album Dear Life. Tell me a little bit about the track and how it came about…

We love this song so much because it’s just so honest about what we get to experience. When we’re out on the road and our families are back at home we’re kind of the setting for a lot of single people just living it up and enjoying life to the fullest. Honestly it looks like a lot of fun but then in the chorus – we call it the Country switcheroo – it turns things around and says, ‘I don’t know a single man out there who wouldn’t die to be where I’m at with our wives and our families back home’. It celebrates the single life but then turns around and celebrates the life that Brad and I get to live right now.

The track is so distinctly High Valley and so catchy. What kind of reaction have you been having from fans?

It’s been amazing. The sound of this song is not too far of a departure from the Make You Mine sound: it’s really driving and really energetic. There’s been a lot of energy around the song. Fans have been reacting very, very positively. It’s very fun to play at the shows, people start jumping up and down, and it’s just one of those songs that brings a lot of energy but it’s got a little bit of meat and potatoes too if you really dive into the lyrics.

What are you at in the process of recording your new album?

We’re almost done recording the record. We’ve got all the songs. We should be done recording probably the entire record by the end of the year. We don’t have a specific date but next year, hopefully at the beginning of next year, we’ll be able to release the album for everybody to hear.

Can you tell me anything about the theme, the concept or the inspiration for the album?

Honestly, High Valley’s always had the same theme since day. We’re all about faith, family and those positive vibes. We always want to make something that the entire family can listen to together. One of our favourite things to hear, or see, in an autograph line is when some grandparents come with their grandkids to our show, or mom and dad bring all their kids, and nobody’s dropping anybody off they’re just all coming together. We’re always going to make music that is family-friendly. We’re always gonna make music that we are OK with our own kids listening to and and even absorbing the messages of those songs. That’s always going to be our goal with our music. This album is definitely not a departure from that but it does dive in and it’s not just some fluffy love songs, which are all good and fine and I’m sure there’ll be some of that, but a little more intentional messages for our wives and for our kids and for the people listening. As far as sound-wise I would say Single Man is a very good representation of the rest of the record. Obviously it’s going to be a spectrum but I would say Single Man is the centre of the spectrum as far as the sound is concerned.

Dear Life was such a strong record and one of my favourites from the year it was released. Is it hard to follow that up and do you feel pressure?

The truth is I do not feel pressure. Not that I mean I think it’s going to be easy to to beat that record but you don’t really feel pressure when our only goal is to record music that we love and that we value. Brad writes a ton of songs and we listen to tons of songs, and we just find the songs that we love and if we love the songs then we’ve got nothing to worry about. There’s no competition in my mind as far as beating the last record or beating anybody’s record. I just want to record music I love and that I’m proud of. I think the longer you’re in this business and the more time you spend listening to amazing songs, your taste maybe gets fine-tuned and that’s why there seems to be a progression of the records. I’m really proud of Dear Life. I do think it is a great record and I believe this record’s going to be great too.

We’ve got to talk about your connection with your UK fans. The last time you played here was C2C in 2018…

You have a really special bond with us and we’re very passionate about you. How has your experience with the UK fans been over the last few years?

We’ve loved every show we’ve done out there. What we love about you guys is (that) it’s almost hard to tell which songs were the single from an audience participation perspective because when we start playing, you guys have done your research, you’ve studied every song and it’s like max energy level coming back from the crowd for every single song. It’s kind of mind blowing and it’s so energising. When we came and played in London that was the exact experience. Even the songs we hadn’t recorded yet, there was a couple like versions of them on YouTube, people had watched those videos enough that they knew the words to those songs too. It was mind blowing.

When you play live, I always feel that’s when you experience you guys at your best. What is it about performing live that brings that energy and passion out?

Man! It’s hard to explain. When the crowd loves it but they don’t appear like they’re having the best day of their lives, you start to lose the energy on stage but when a crowd is just so engaged it’s impossible not to bring the energy. You can’t have one without the other. We need the crowd to bring the energy and they need us to bring the energy too so you just kind of feed off of each other and it’s really cool when that happens. There’s always those crowds out there that you have to force the energy but not in the UK that was not something we ever had to do.

You guys were definitely one of the highlights when you made your debut at C2C in 2016. Everyone was talking about you and the crowds for your shows kept getting bigger all weekend. What’s it like for you to come over to another country and get that kind of reaction?

When you’re young and you’re learning about geography in school you find all these places that you want to go experience one day. I never imagined that the first time I ever got to go see some of those places there’d be people singing my songs back at me. That’s kind of an unbelievable way to experience a brand new part of the world.

Do you have any plans to come back to the UK this year?

There have been conversations. There’s no confirmed dates so I’m not going to give you anything specific but it will be sooner than later.

Yeah. We’re we’re pumped. The moment we get dates locked down it’ll be all over the socials. Anybody that that wants to know will be able to find out the details really easily.

Yeah we’re looking forward to it too.

What’s on the agenda for High Valley over the next few months?

It’s festival season over here. There’s multiple festivals every single weekend so that’s what we’re just doing right now. Honestly the only other conversation is coming over to see you guys at some point so we’re ironing out those details right now. Until then we’re just gonna be weekend warriors over here in America.

High Valley’s new track Single Man is available to download and stream now. You can watch the video for it below: