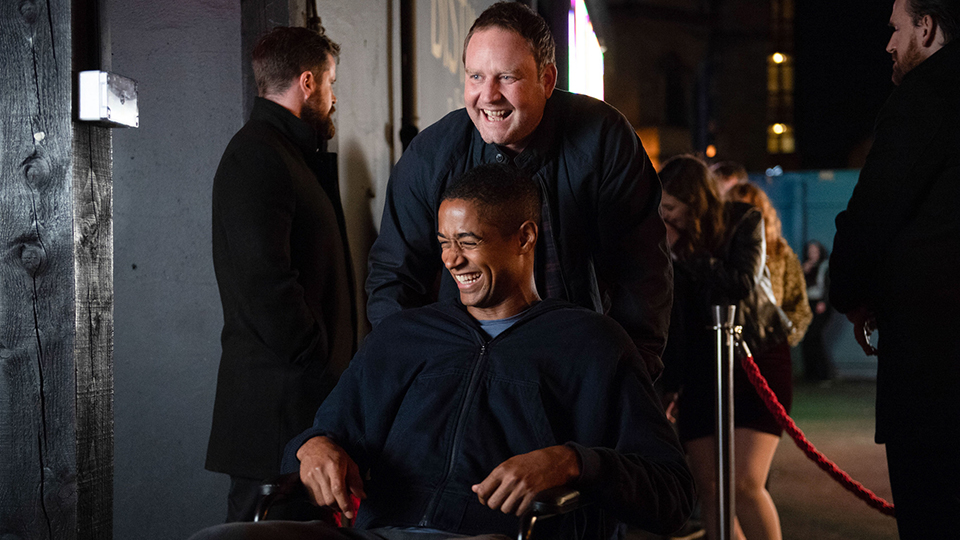 Jamie’s (Alfred Enoch) curiosity put him in grave danger on the latest episode of Trust Me.

If you don’t want any spoilers for Trust Me, stop reading this article now.

Jamie got out of bed and bathed himself as he prepared for another day on the ward. At the same time Zoe (Katie Clarkson-Hill) went for a run before getting ready for work, and of course popping some more pills.

When she arrived on the ward, Katie made up a reason to take Jamie somewhere quiet so they could discuss what she’d found. She revealed that she’d spotted a pattern and told Jamie she would take it to Alex (Richard Rankin) to get his support before they took things any further.

Hopeful that she may get somewhere, Zoe spoke to Alex and he was very dismissive. After Zoe pleaded with him, he agreed to take the file to Dr. Watson (John Hannah), claiming it would be much better coming from a man.

Jamie took in some fresh air and was collected by Debbie (Ashley Jensen) for physio. This time he pushed himself, especially after seeing the new patient being prepared to return home. He managed to push his legs slightly, showing a huge improvement.

Alex took the file to Dr. Watson and was confronted by the footage of Zoe stealing pills from the medical supply cabinet. That made Alex question whether Zoe was acting rationally when it came to her theories with Jamie.

Debbie tried to convince Jamie to agree to a home visit so he could go and see his mother, and get back to normal life, but he reacted aggressively. Debbie snapped back telling him not to speak to her like that.

Following a staff meeting, Zoe was called into Dr. Watson’s office where he showed her the footage of her stealing pills. She tried to lie her way out of it saying it was just paracetamol for a headache but he told her he knew that wasn’t the case thanks to a stock take. Watson then tried to appeal to Zoe by playing nice and acting concerned about her.

He pushed her to focus on her job, threatening that things would get complicated for her if she continued down this path. After telling her she was tense and rubbing her shoulders, Watson told Zoe that Jamie needed to go from the ward (didn’t that sound like a death threat?) and they were interrupted by Debbie.

Jamie overheard Zoe and Alex arguing about the pills, and Zoe still continued to lie. Alex warned her that Jamie was going to make Zoe’s old problems worse and told her that he just didn’t want to see her getting sick again.

Once Alex left, Jamie tried to speak to Zoe but she told him she couldn’t speak to him. He pressed her to find out what was going on and she invited him into a quiet corridor where they could talk. Zoe revealed her fight against depression and admitted that she tried to kill herself and almost succeeded.

Jamie asked why she was sharing her story and Zoe said that she’s not sure she can trust herself to help him. When she was pushed further, Zoe said that shouldn’t have encouraged Jamie and pleaded with him to go home. As he wheeled his way back to the ward, a stressed-out Zoe didn’t look convinced by her own words.

Zoe then asked Dr. Watson if she could take a personal day and he agreed that was fine.

Jamie, still angry, was less impressed when the patient who’d been in Danny’s bed was discharged. Meanwhile Zoe dealt with her issues buy going home and drinking.

That night, Jamie waited for the nurses’ station to be unoccupied so he could snoop on the computers. He accessed the staff rota but was interrupted by Alex who wheeled him back to his bed and administered a sedative, telling Jamie that it was to calm him so he didn’t disturb other patients.

Jamie tried to refuse the sedative but Alex called for assistance to hold him down while he injected him. Could Alex be involved in the murders on the ward? By this point he’s certainly looking shifty.

Alex instructed the nurse to give him more medication if she needed to. She questioned what they were treating and Alex said it was ‘psychosis’. Alex then returned home to find Zoe asleep on the sofa in front of the TV.

The drugs that Alex gave Jamie made him have another nightmare. This time he was stuck in the war zone in his wheelchair and he couldn’t move. He then slashed his own throat.

Dr. Karimi (Amiera Darwish) went to see Jamie and found him half hanging out of his bed. She gave him some water and checked his chart, where she found out that Alex had given him way more anti-psychotic than he should have done. When Alex was condescending, Dr. Karimi tried to argue back but Alex told her he had Dr. Watson’s backing and there was to be no further discussion.

Debbie was next to visit Jamie and he told her he wanted to go home. She accompanied him on the drive back to his mother’s. The visit was awkward with Jamie barely speaking and his mother treading on egg shells.

As Debbie was shown around the house, Jamie had flashbacks to his drunk father hitting his mother. As Debbie concluded her visit she said that most of the house was fine but improvements needed making for access to the bathroom.

With that Debbie told Jamie she’d be back to collect him on Monday and tried to reassure his mother that Jamie’s behaviour was a result of him being on a long road to recovery.

Zoe returned to work and she had a chat with Dr. Karimi who wanted to get her insights into Jamie’s mental state. Dr. Karimi shared her concerns about the drugs Alex administered to Jamie but Zoe stuck up for him and made a quick exit when she was paged.

Jamie accompanied his mother shopping and found it difficult when he felt like a baby in a pram. As he was reaching for some whisky, he bumped into the girl he’d had a one-night-stand with and she offered to get the bottle down for him.

Back home Jamie had more flashbacks to his father abusing his mother but this time we saw him hit his father to stop the abuse. He ate dinner with his mother then asked where his father was. Jamie confronted his mother about how he stood up for her and she threw him out of the house.

She apologised telling Jamie she wasn’t as brave as he was. They were interrupted by a knock on the door from his former military colleague Charlie (Jamie Michie) who was forced onto leave. Jamie asked if Charlie was sleeping and he replied saying that a scotch or two helped.

Getting to the point Jamie asked Charlie if he’d spoken out about what happened to them. He denied it and told him that they were using desperate tactics to get answers. Charlie also said he would back Jamie up every step of the way before heading to the bar to buy shots.

At their flat, Zoe gave Alex the cold shoulder when he tried to initiate sex. She said she was tired but he didn’t give in and he kept on kissing her.

Jamie and Charlie had fun in the streets after their pub visit. Charlie tried to take Jamie into a club but the bouncer refused to let them in until Charlie gave him a made-up sob story. In the club Charlie stared at a woman dancing so Jamie decided to go to the toilet where he emptied his colostomy bag.

When he got back to the dancefloor he saw Charlie chatting to some girls. A reveller dropped a drink on Jamie and Charlie intervened, beating the man up when he chatted back. As Jamie tried to leave, a policeman tried to help him and he attacked him resulting in him being put in a cell.

That caused Jamie to cycle through his memories and he panicked about the situation on the ward. Banging on the door he shouted that he needed to talk to someone and the police officer at the desk ignored him.

Jamie was then collected and taken back to the ward where Alex took a blood sample and wiggled the needle around in his arm while warning him that Zoe doesn’t need him putting ideas into her head.

Dr. Watson and Alex had a meeting with Dr. Karimi and told her that Jamie needed to be temporarily section him. Dr. Karimi argued her case but Dr. Watson overruled her.

Zoe was called to check on Jamie who was in a private room with a severe fever. She told the nurse to treat him immediately for sepsis and she noticed the bruising on his arm caused by Alex. The nurse labelled up an IV bag but was called away to pick up a message. When she returned she picked up the bag and handed it to Zoe who hooked it up to Jamie.

Within seconds, Jamie went into cardiac arrest and Zoe fought against time to save his life. Who do you think tampered with the bag?

Trust Me concludes at 9pm Tuesday on BBC One.