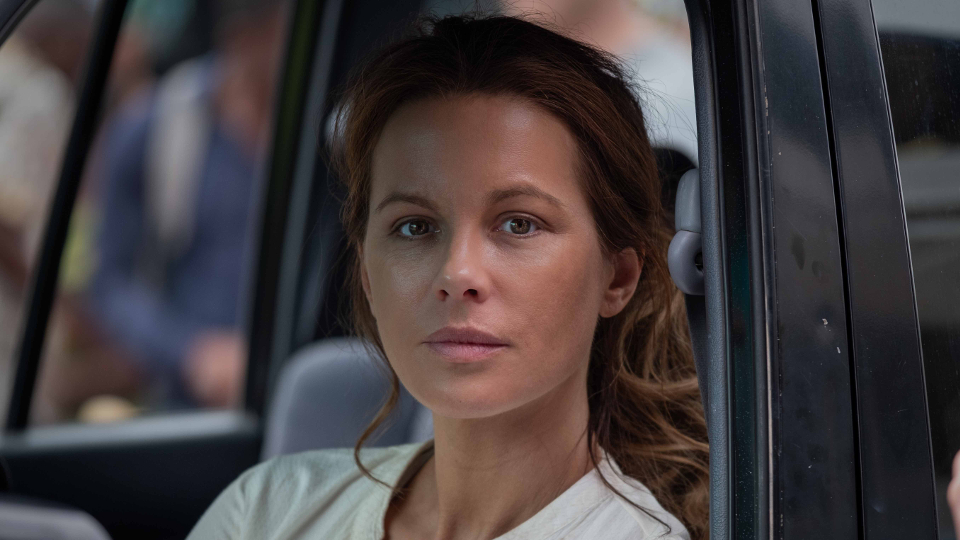 On the eighth and final episode of The Widow, blindsided by the revelations about Will (Matthew Le Nevez), Georgia (Kate Beckinsale) returned to Kinshasa to try and expose the truth about what really happened.

The episode opened showing the entire mining process for the precious metals found in the mine in Kinshasa. It showed the metal being dug out the ground all the way to being used in smartphones.

Martin (Charles Dance) took a call from his wife to see how Georgia was doing. He was waiting for her to arrive back in Kinshasa before they could head home. He picked her up at the airport where she looked to be completely broken by the revelations she’d learned about Will in Rwanda.

Georgia wondered if Will had always been a liar or if she was just stupid. Martin said she wasn’t stupid, just in love. He said people change but at least she finally knew the truth about what happened. Georgia was upset that all the time they were together was wasted. As they got into the car to leave, Georgia asked if Martin had found Adidja (Shalom Nyandiko) but he said he was sorry but he hadn’t.

Georgia received a call on Pieter’s (Bart Fouche) phone and was shocked to hear Judith’s (Alex Kingston) voice as she thought her dead. Judith said she received the message Georgia left her and offered to talk in person. Georgia said she was done with it all but agreed once she found out that Judith had Adidja.

In Kinshasa, Martin drove Georgia to the meet and told her it was a terrible idea. Martin promised to wait with the car if she needed anything. Georgia found Judith alone and immediately asked after Adidja. Judith said she was safe and asked to know where Will was. Georgia said she had no idea where he was. Judith next asked about how she met Adidja, but before she answered she said should could guess having seen child soldiers before.

Georgia thought Judith spoke a lot for a dead woman. Judith explained that General Azikiwe (Babs Olusanmokun) had ensured the doctors reported her as deceased to help keep her safe. She said that he didn’t know she was meeting with Georgia because he can be unpredictable. Georgia let slip that Will was no threat to Judith, despite knowing she bought the plane ticket for him with knowledge of what would happen. Judith realised that Georgia had found him.

Georgia wanted to know what happened to Judith as she’d come to the DRC to do good. Judith said her charity was transforming the place. She said that Azikiwe told her to get Will on the flight. Judith gave an ultimatum, Will’s location for Adidja’s location. Georgia wrote down the address and explained that Will had lied and had now found someone else who he had a baby with. Judith gave Georgia the location she could find Adidja and said she wasn’t a monster.

Georgia headed back towards Martin. Her phone rang and Martin told her to turn around because there were two men with guns coming for her. She spotted them and did as he requested. He followed at a safe distance and gave her directions that took her into a market. The men continued to follow her and she did her best to evade them. Martin called to say he was coming to her but she told him to meet her round the back of the market and hung up. She managed to lose line of sight and made a run for it, as she got outside Martin arrived so she jumped into his car and he sped off.

Meanwhile, Azikiwe sat drinking vodka with a hallucination of Sidney (Yoli Fuller) while another of Gaëlle (Luiana Bonfim) stood by. He answered a knock at his door and found Judith had turned up to see him. She was angry that he had men follow her and he said it was for her own protection. She said Georgia had no proof of anything but he explained that Georgia and Martin were there when he killed Sidney. Judith said she wanted him to trust her because they were in it together. He laughed, saying it was he who made the difficult decisions. Judith revealed Georgia gave up Will’s location and he asked to know where.

Martin was worried that the location given for Adidja might not be safe, however Georgia asked him to drive her there anyway. They went inside together and found children playing in what looked like a school. Georgia spotted Adidja playing alone and went to her. Adidja asked where she’d been and why she wasn’t at Judith’s when she returned. Georgia apologised. Adidja asked if this was her home now and Georgia said it was nothing to do with her and that they could find somewhere else. Adidja said sooner or later, Georgia would have to leave to return home. Adidja gave Georgia a friendship bracelet and they shared a hug before saying their goodbyes. Leaving Adidja behind had Georgia in tears again. Martin did his best to reassure her that Adidja would be ok.

Georgia and Martin arrived at the airport for their flight home. Martin suggested it would be safest inside but Georgia spotted the bar she went to with Emmanuel and Pieter. While they waited Georgia started thinking that the truth about the plane crash needed to be known. Martin reminded her that people had already tried to kill them earlier that day. Georgia however was determined that Azikiwe not get away with what he had done. Martin suggested they get back home first then he’d put her in touch with the right people but Georgia had other ideas.

They went to see Emmanuel’s wife Ivette (Robinah Kironde) and told her the story, including why Pieter killed her husband. Georgia explained they needed to get the truth out about the plane crash but Ivette said the Congo was broken and the government was full of snakes. Martin wondered if she was in touch with relatives of those who died. Ivette revealed a group chat that Emmanuel had used and Georgia asked if they could send a message.

At the General’s house, he sat paranoid at every little noise as he drank. He continued to see hallucinations of those that he had killed. One of his men came to give him news of an operation to go after Will in Rwanda. They were using freelancers so that nothing tracked back to Azikiwe.

Will was sat at home with his daughter as the two gunmen approached a house. They knocked on the front door and Will stood up. The door opened and it wasn’t Will, they’d been sent to the wrong house. Meanwhile, Will opened his door and was met by the security guy that Georgia used. He handed Will a mobile phone.

Georgia made a phone call to Judith and left her a voice mail saying she was still alive and still in the country. She said if she wanted to know why she should head straight to Azikiwe’s house. Georgia and Martin arrived, and met Ivette. Behind her was a large crowd of relatives of those who died. They were protesting against Azikiwe for justice for their lost friends and family. Inside Azikiwe and Judith watched the protest via the CCTV cameras. Georgia called Judith to explain what was happening and Azikiwe said she should go to hell.

Judith came outside and continued speaking to Georgia on the phone. She said she was exploiting people’s grief because Will didn’t love her. She also said that there had already been a public inquiry into the crash and it was ruled as an accident. She told Georgia to go home and went back inside. Georgia said she was wrong. She livestreamed the protest and called Will asking him to tell the truth about what happened.

Will did as Georgia requested and he turned up to tell the truth to the Justice Department about everything that had happened. He had emails, text messages and financial records to confirm his story. He was asked why he had suddenly decided to tell his story. He replied that he’d seen what losing someone does to people and that it had happened to too many people. As he left, Will looked emotional and nodded to Georgia.

Georgia wondered what would happen to him now and Martin said he imagined that he’d probably try to strike a deal. Martin called him a cockroach. Georgia said it was no longer her problem and hoped he’d do what he said he would.

Meanwhile, Azikiwe told a story about a donkey that his uncle used to tell him when he was younger. He said it helped him feel better. Although he was sat in an empty room, in his head he saw the dead passengers of the plane crash and others he had killed stood around him listening. When he had finished his story he took his pistol and committed suicide. The police arrested Judith.

Elsewhere in the episode, a series of sequences showed Georgia back in Powys in Wales. It appeared to be after the events in the DRC as she had the friendship bracelet that Adidja gave her. A man called Owen (Gareth David-Lloyd) knocked at the door to ask if she’d seen his female sheep dog, Nigel. Georgia hadn’t but agreed to go out and help try to find her.

Back to the search for Nigel. Georgia and Owen searched everywhere they could think to look. Owen asked about why she chose to live where she did and she explained her cabin had belonged to her Dad. Owen had a story of her father helping him when he got stranded in a storm as a child. Owen suggested they call off the search but Georgia said they could probably manage another hour before the light faded and that she didn’t like giving up.

Back to the search for Nigel. Georgia and Owen arrived back at her cabin. He asked if he could use the loo and she let him inside. He revealed that Nigel ran off most days and often didn’t come back for a couple. He said he didn’t tell her because he wanted to get to know her. Georgia suggested that maybe Nigel wanted to be away from him and he might be better letting her go. Owen said it was no surprise that she’d ended up there all on her own. Georgia practically threw him out, saying he had no idea about her past.

At the end of the episode, Georgia had returned home to Wales. She had sold her property and Martin arrived to help her move. He arrived with Adidja who had come to live with Georgia and she thanked her for giving her a home. As they drove away they spotted Nigel running free. Martin said she must be lost but Georgia said she wasn’t and they drove away to their new life.