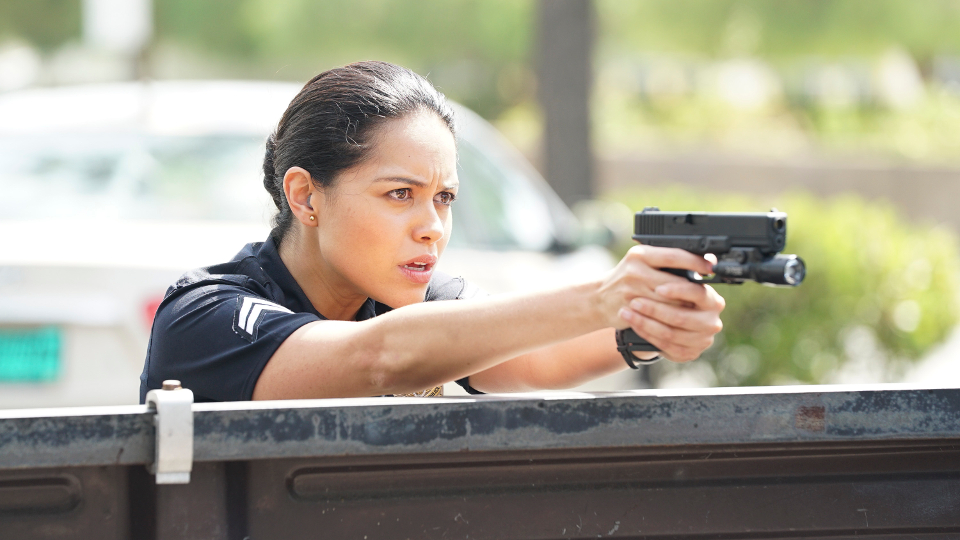 On the fourth episode of The Rookie season 1, the rookies were temporarily paired with new training officers.

The episode opened up with Nolan (Nathan Fillion) and Bishop (Afton Williamson) watching traffic. Nolan wondered why they weren’t pulling people over for using their mobiles while driving. Bishop said there was too many and then gave him a test on his Rook book and told him to make sure he was studying it often. They got a call to an armed robbery, one of the robbers fell over and Bishop grabbed him while Nolan went after the other one. Nolan stopped him and found out they were boosting a urine sample to stop his partner going back to jail. He was in possession of an engagement ring and Nolan and Bishop let the man propose before taking them in.

Back home, Nolan told Chen (Melissa O’Neil) about his day while she tested him on his Rook book. Later she told Nolan that Bishop knew about their relationship. He was surprised that she hadn’t told him sooner and she said she was trying to avoid him confronting Bishop and getting fired. He later confronted her anyway and Bishop told him that the relationship would eventually cause them both problems.

At the precinct, Grey (Richard T. Jones) announced that it was Training Officer switch day. He paired Nolan with Lopez (Alyssa Diaz), Chen with Bishop and West (Titus Makin Jr.) with Bradford (Eric Winter). He wanted every rookie to try and uncover something personal about their temporary Training Officers as a test of their investigation skills. The best insight would win a day off while the worst work be assigned Saturday night cavity search duty.

Lopez just told Nolan a bunch of stuff about herself to stop him trying to find it out. Bishop made a point of testing West as much as possible. His first involved performing an emergency stop and quizzing him under pressure about where they were but he’d been paying attention. Next he took him on a raid with a team of detectives where West impressed by having a pocket full of dog biscuits to keep the guard dogs happy. Things turned back quick when the guys they were going after started shooting and West froze up again leaving Bishop fuming.

Bishop and Chen had to stop a vehicle and Bishop told Chen to get the driver. Instead she grabbed one of the occupants who denied knowing anyone else in the vehicle and they had to let him go. Bishop continually gave Chen a hard time about dating Nolan.

Chen and Bishop’s next call was to a young girl who said she was being held hostage. She was an actress who was being pushed by her foster mom. All the girl wanted was to go back to her real mom. Bishop gave the girl her card if she needed to talk. The girl later came to the precinct to talk to Bishop and she gave her some advice.

After Bishop gave Lopez a telling off about West freezing, West begged Bishop to give him a chance and help him fix his issues. Bishop said he was a lost cause and that the next day would be his last on the force. He later had a change of heart and took him to see a man named Wallace (Kristian Nairn) who suffered from agoraphobia. They had a chat and it helped West with his issues.

Lopez took Nolan to the courthouse. While they were there a prisoner escaped and Nolan gave pursuit but he got away. Nolan found out that Lopez did things quite different to he was used to by Bishop. They tracked the escapee down to his daughter’s wedding and found him having a dance with her. They decided to let him finish the dance before taking him back in. To say thanks, and to reduce his sentence, he gave them details of a large drug deal that was going down.

The teams were sent out to try and stop the drug deal and West also went out into the field. Bishop told West if there was shooting to stay in the car. When one of the dealers started shooting, West did as he was told. Bishop got pinned down by a guy with an assault rifle. West considered getting out the car to help but didn’t want to disobey Bishop. Instead he ran him over with their police car.

At the end of shift, Grey quizzed the rookies to find out what insights they had found out on their temporary Training Officers. All three of them said that they hadn’t managed to find out anything to avoid extra credit. Grey said the next day they would all be quizzed again on their Rook books.

At the end of the episode, Chen came to break up with Nolan. Before she did, he spoke first and broke up with her. She was annoyed that he seemed to find it so easy to do. She told him she’d see him at work and left.

Can’t wait for the next episode? Read our preview of The Rookie episode 5 The Roundup.