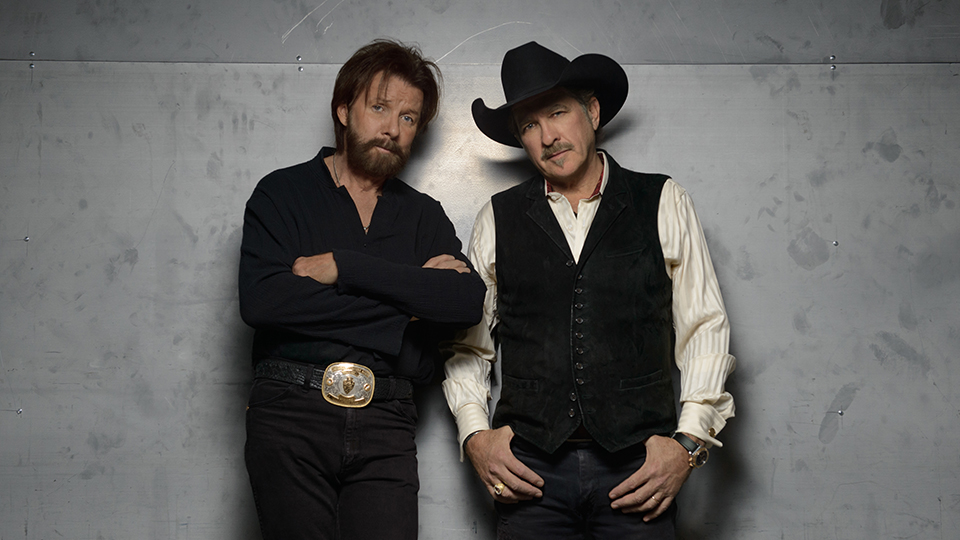 Brooks & Dunn – Kix Brooks and Ronnie Dunn – are Country music royalty. They’ve scored 20 number one hits since 1991 and they’ve sold more records than any other duo in history. It’s been 12 years since Brooks & Dunn last release a studio album, 2007’s Cowboy Town, but their influence on the Country music genre is still as strong today as it always has been. Often name-checked by the current crop of Country artists, Brooks & Dunn have done something a little different for their latest album Reboot. Across the 12 tracks, the duo has collaborated with some of today’s biggest Country stars to reimagine some of their classic hits.

Reboot opens, appropriately, with Brand New Man. That song was Brooks & Dunn’s debut single and their first number one. For this new version, they’ve teamed up with Luke Combs who has had a pretty meteoric rise to the top of the charts himself in the past few years. Not much has changed with Combs on the track and his voice actually works nicely alongside the duo.

Ain’t Nothing ‘Bout You is the next track and it features Brett Young. The song has echoes of the original but it’s got a much-more soulful edge. Young’s vocals are naturally more soulful and after opening the song, he brings out a soulful edge to Dunn’s voice that we’ve not heard previously. This version has been criticised by some people but I think it’s one of the most interesting moments on here.

The artists that Brooks & Dunn have chosen to work with is interesting. Thomas Rhett and Kane Brown are both included here, and both artists get a lot of flack for not being ‘Country enough’. Well if they’re Country enough for Brooks & Dunn, then nothing more needs to be said on that subject really does it? Rhett brings his soulful pop edge to My Maria, making the song feel a little more contemporary, while Brown shows he can do traditional on the stirring closer Believe.

The highlights on Reboot come thick and fast. My Next Broken Heart with Jon Pardi is a perfect collaboration for Brooks & Dunn, given that Pardi is one of the few modern Country artists making traditional Country music. Similarly Midland’s inclusion on Boot Scootin’ Boogie is a marriage made in heaven and it can be hard to tell where Midland ends and Brooks & Dunn begin. Kacey Musgraves produces a version of Neon Moon that incorporates shimmering beats that wouldn’t have been out of place on her award-winning album Golden Hour.

Elsewhere Brothers Osborne tear up Hard Workin’ Man, transforming it into a rockier affair and Ashley McBryde brings her emotive vocals to the gorgeous You’re Gonna Miss Me When I’m Gone. In fact the latter track makes me hope she does a Reba McEntire and sorts out a Las Vegas residency with them! The biggest surprise comes on Mama Don’t Get Dressed Up For Nothing with LANCO. If you’d played me that track without telling me who it was, I’d have no idea that it was LANCO. Brandon Lancaster’s vocals are really strong and LANCO brings a stomping urgency to the track.

Reboot is a unique celebration of an act that has enjoyed impressive longevity and left a long-lasting impression on Country music. In some ways you could see Reboot as Brooks & Dunn giving their stamp of approval to 12 of today’s Country artists but it also serves as a timely reminder of just what incredible artists they are. When C2C is putting together its legends wish list for the 2020 festival, I hope they’re considering Brooks & Dunn because that would be quite the coup.