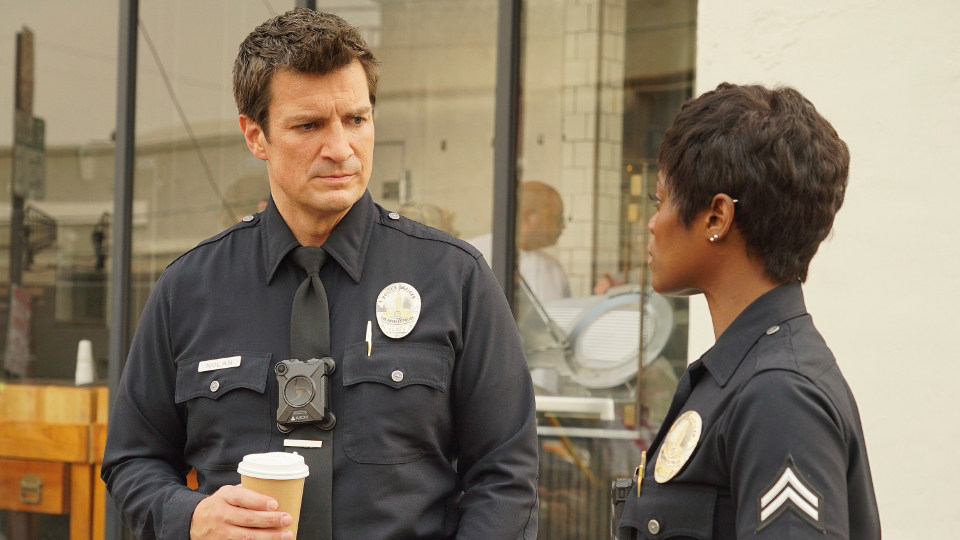 The episode opened up with Nolan (Nathan Fillion) and Bishop (Afton Williamson) pursuing two members of a heist crew who were dressed as zombies. They were chasing them through the packed metro. Nolan wrestled one to the ground while Bishop tasered the other. After Nolan got his man in cuffs he looked up to see a busker had made off with the money.

Later, Nolan, Chen and West (Titus Makin Jr.) went for a run on the beach. Chen was apprehensive about Bradford coming back to work. Meanwhile, back at the precinct, Grey (Richard T. Jones) cleared Bradford for duty and gave him a talk about going back on duty after being shot. The entire department gave him a huge cheer and round of applause on his return.

Grey briefed the department on the zombie heist crew and as usual gave Nolan a hard time. Captain Zoe Anderson (Mercedes Mason) joined them and welcomed Bradford back. She then gave an update following new intel on the heist crew who were responsible for a string of heists in the past 6 months. Anderson also needed someone to take a job involving a civil termination where someone was getting fired at a tech job and the feeling was they weren’t going to take it well. Before Grey could choose anyone, Nolan thought it best to just volunteer.

At the tech company a woman was fired and Nolan helped carry a box of her stuff. Bishop thought he should have let her do it herself in case he needed to act. He thought he was just being helpful. While they were talking the woman began smashing up the car of her now ex-boss so they had to intervene.

Bradford and Chen attended a call at a bank where a guy was trapped in a wall behind an ATM. Bradford tried to smash the wall in but it was too difficult for him with his recent gunshot injury. He had Chen takeover and she managed to free the man.

Lopez (Alyssa Diaz) and West were called to a silent alarm at a Chili Johns. Lopez said 9 times out of 10 there wasn’t a crime in progress but they found what looked like an armed robbery in progress. The chased down the culprit and Lopez recognised her as someone who used to play ball for the Trojans.

Nolan and Bishop responded to a sighting of the money thief. They went to his home and he gave them the money. He’d spent a small amount on groceries and had his water turned back on. He apologised and explained that things had been tough since his wife died. They had to take him in and place his son with Child Protection Services. Bishop later paid bail for the man.

Their next call involved two guys driving recklessly for their YouTube channel. Nolan left his police car door unlocked and one of them got inside and started messing about. Back at the station, Grey began giving Nolan a telling off but Bishop said she had left her door unlocked, not Nolan, and got disciplined for it.

After a call, Chen went to use the restroom. She checked no one else was there and hung her belt and gun on the back of the toilet door. As she sat down, someone grabbed it over the door and ran off. She ran outside and found that it was Bradford who had taken it to teach her a lesson. Bradford got a call that his wife was in hospital after an overdose so they headed there where he argued with her and put his fist through the wall in anger.

Next they were called to a biker gang at a bar. Chen was concerned for Bradford but he said he was fine. There he challenged one of the gang to a fight and said if the man beat him he’d let him go. Bradford took a beating but came out on top and they took the guy away in cuffs. Chen told Nolan about the situation and her concerns for Bradford. Nolan suggested she’d have to talk it out with Bradford. She confronted him after he took supplies to give to his wife.

Later, the arrested zombie heist crew gave up information on their accomplices. The cops were sent to assist SWAT and Nolan and Bishop ended up in pursuit of the suspects. They ended up following them into a hospital, while Bradford and Chen followed theirs on foot and came under heavy fire. Chen got the advantage by climbing onto the roof of a truck and flanking the suspect. Meanwhile, Nolan and Bishop followed their suspect to the hospital roof and thought they had stolen the medevac helicopter. The suspect was still on the roof and pulled a gun on Nolan but he managed to keep her distracted until Bishop got close enough to taser her.

Elsewhere in the episode, everyone gave West a hard time for not having a plan B if he didn’t make it as a cop.

Can’t wait for the next episode? Read our preview of The Rookie episode 4 The Switch.