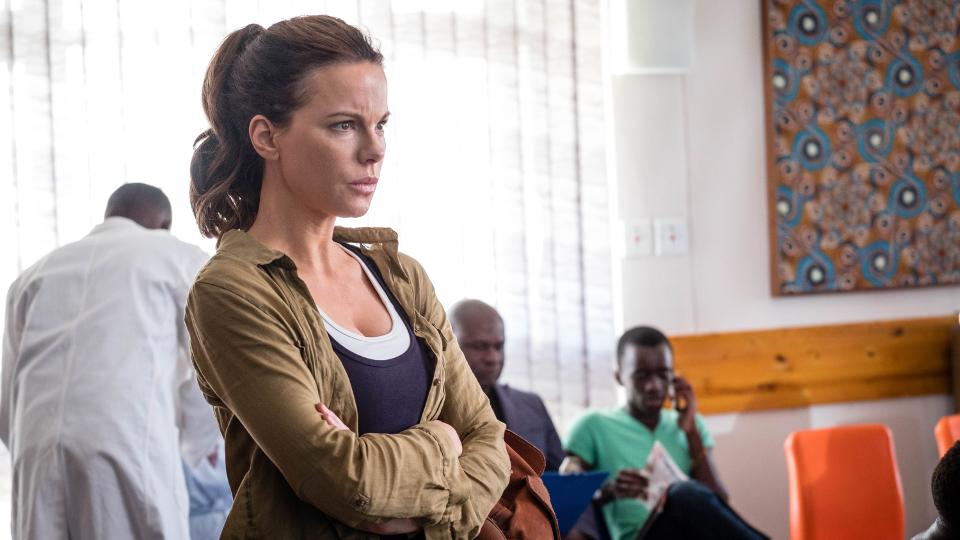 On the second episode of The Widow, Georgia (Kate Beckinsale) and Emmanuel (Jacky Ido) worked together to try and track down Pieter Bello (Bart Fouche).

The episode opened up in Punia in the Democratic Republic of the Congo (DRC). A delivery driver turned up to work to find a woman named Gloria (Balindile ka Ngcobo) waiting for him. She said she’d be joining him today and he spotted a mysterious crate already loaded into his van. When he asked what was in it she asked if it mattered and offered him a bundle of bank notes that he snatched. The then got to work on loading the rest of the cargo.

We then picked up where the last episode left us, with Georgia, Emmanuel and Judith (Alex Kingston). They were looking at the hire car and the ‘GO HOME’ note. It was an obvious threat but that wasn’t going to deter Georgia in finding out what happened to her husband Will (Matthew Le Nevez).

Inside the car she found a flyer for the car hire company which was based at the airport and decided to see if they could find out who sent the car. The clerk at the airport wasn’t much help. All he could tell them was that the car was hired by a white man who paid him to keep it off the system. Emmanuel felt they were best focusing on Pieter and with the help of the Internet he discovered that he owned a company called Bulletscreen Security that had closed down.

The headed to the building where the company had been based and entered when someone left. The security guard was outside smoking so Georgia had a quick look through his desk and checked out the post. She found a letter for Bulletscreen Security and decided to steal it. Back outside they discovered it was an insurance document that named Pieter Bellow and Vanda Steyn (Chanelle de Jager). There was also an address and when they got there Vanda answered the door. She revealed that she had been married to Pieter for 15 years and invited them inside.

Georgia showed her the CCTV photograph of Pieter and she confirmed it was him but said they no longer talked. She explained his business closed after he became infected with HIV. Vanda said he also infected her then accidentally knocked a glass of wine over Georgia. On her way to the bathroom, Georgia had a snoop in the bedroom of Vanda’s daughter Mia (Brooke Elliott). She discovered a birthday card from her father and decided to make a swift exit. Outside, Georgia told Emmanuel that Vanda was lying and showed him the card. She they asked what time the schools finished.

A flashback to three years earlier showed Emmanuel in hospital with his wife Gaëlle (Luiana Bonfim) by his side. Emmanuel had been badly beaten and it became clear that it was due to owing someone a large sum of money.

Meanwhile, back in the present at DRC Aid, Judith met with the chief of police. She told Joshua (Matthew Gravelle) that she thought she’d have a word with him about Will to try and help Georgia. The pair wondered if Will was still alive and said it would be nice to see him again.

Back with Georgia and Emmanuel, they went to the school to wait for Mia. Emmanuel noticed the scars on Georgia’s arm and she said it was from a long time ago before the crash. Emmanuel took an urgent call and had to leave. Georgia spotted Mia and told her that her father had been in a crash so she needed to go with her to the hospital. At home Vanda received a call from a man saying her daughter was in an accident and that she should come to the hospital. A panicked Vanda got there as fast as possible and found Mia in the waiting room. She then saw Georgia and realised they were set up. Georgia was trying to prove a point about how worried she was about Will and demanded Vanda help her. She revealed that last she knew, Pieter was in Kisima.

At the Congolese-Rwandan border the delivery truck arrived at the checkpoint. The driver looked terrified and even more so when the guards decided to inspect his cargo. They found bags of coffee beans and asked if they could take some because they had run out. Gloria laughed and said they could take some then they were allowed through.

Georgia and Emmanuel met up later at a noisy bar. He revealed that he had to dash off to his wife Ivette (Robinah Kironde). He explained that her ex-husband was violent and that was who smashed up his car windscreen. Georgia revealed her intention to take a flight to Goma so she could try and find Pieter in Kisima. Emmanuel explained that it was a dangerous place but she was determined to track him down.

Emmanuel then said it was his fault that Gaëlle had died. A flashback revealed that after the crash he went through his wife’s possessions and found her diary. He revealed that she had taken a large sum of money to pay of his gambling debts in return for taking something aboard the plane. A flashback showed her board the plane with a rucksack featuring a green lion. Emmanuel didn’t know what it was that she was paid to carry but speculated that it was maybe drugs or information. He said he owed it to her to find out the truth. It was later revealed that while looking at the diary he looked out of the window and saw Ivette taking a beating from her husband. He intervened and that’s how they met. He decided to to with Georgia.

The next day, Georgia told Judith she was heading to Kisima. Judith said DRC Aid had an office there and it wasn’t a place to rush to. Meanwhile, in Kisima, Pieter met with a man named Djamba (Réginal Kudiwu). They looked like they were up to no good and talked about making history.

As Georgia and Emmanuel got ready to leave, he took another urgent call from his wife. Georgia told him to take the car and she’d get a taxi to the airport. He thanked her, jumped in the car and it exploded as Georgia walked away, knocking her to the ground. Judith came running out but there was nothing either of them could do to save Emmanuel.

Georgia blamed herself for Emmanuel’s death and was comforted by Judith. After a sleepless night, Georgia took a taxi with Judith to see Ivette to apologise for the death of Emmanuel and she was understandably furious. Georgia promised to find his murderer and Ivette told her to stay away. Back in the taxi, Judith announced her intention to travel to Kisima with Georgia.

Elsewhere in the episode, in Rotterdam, it was revealed that Ariel Helgason (Ólafur Darri Ólafsson) went home with Beatrix (Louise Brealey) and spent the night. She wanted to know more about the plane crash but he said he wasn’t ready to talk about it.

After Ariel left, Beatrix used voice search to find out about the plane crash. It revealed that the plane crashed due to hydraulic failure, that 86 people died and only 1 survived. It sounded like Ariel was telling the truth until it read the name of the survivor and it wasn’t Ariel.

A couple of days later they met up at a café. Beatrix confronted Ariel about the plane crash, knowing he wasn’t the named survivor. She was understandably angry but he left upset.

The next day he turned up at her home to apologise and explain himself. He said he’d never told anyone about the plane crash. He said nothing she would ever hear about it was true. Again he said he was on board when it crashed but that the reports of what happened were lies. There was no mechanical failure, it was brought down by a bomb. He said he’d seen the person who took it on board. It was a pregnant woman carry a rucksack with a green lion on the front!

At the end of the episode, Gloria and the delivery driver made it to their destination in Rwanda. She wouldn’t let him unload the crate and told him to go. The camera zoomed in on a crack in the crate and it was revealed that there was a man inside – Will!

Can’t wait for the next episode? Check out our preview of The Widow 1×03 The Survivors.

The third episode of The Widow airs Monday 15th April on ITV at 9pm.