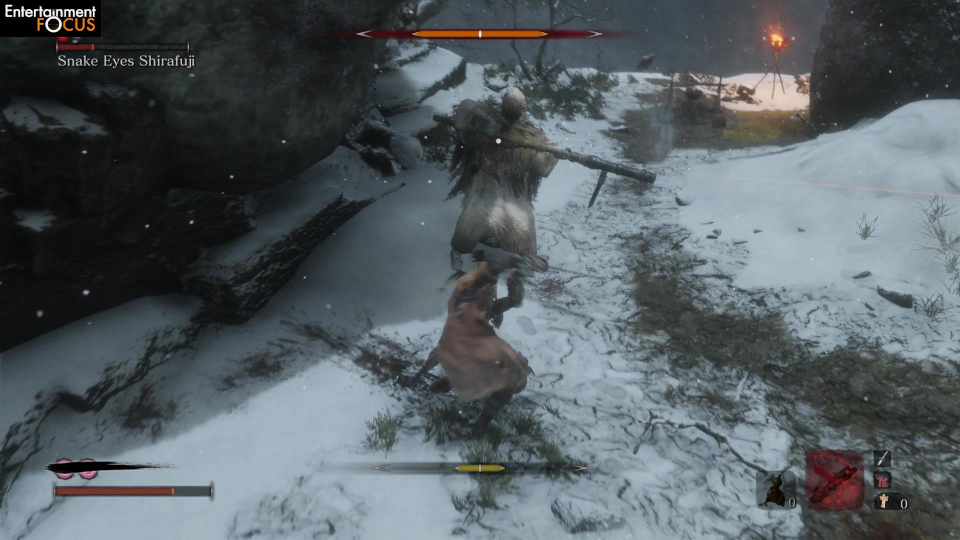 All of the bosses in Sekiro pose their own challenges and Snake Eyes is a tough one to get to grips with. He’s fast, hits like a truck and has a ranged attack too. If he manages to get you with his grab attack it’s likely to be game over if you’re not at full health.

Thankfully there is an easy, well easy ish, way of taking him down.

To start with make sure you have the Firecracker attachment ready to go, do the usual leaps and bounds to get to him trying to avoid the snipers along the way. Rather than engaging him directly run past him to the left and jump up to the ledge you can see. Wall hug along and go round the corner until you see the bridge.

Dash about half way across the bridge until you see his health bar disappear and then leg it back to the wall hug section from before. There will be loads of snipers taking shots at you whilst on the bridge so don’t stop to admire the scenery.

Go back towards Snake Eyes hugging the wall and then drop into stealth mode. You should be able to sneak up on him to deliver the first deathblow you need. Now you’ve got one deathblow out of the way you still have to face him head on. Try to keep your distance to avoid the grab attack and time your hits so they marry with the end of his combos. Use the firecracker to stun him periodically to get more hits in to reduce his health and ruin his posture. He’s still pretty tricky but follow the steps above, use firecrackers until you run out and you should be fine.

Check out the video below to see this in action: