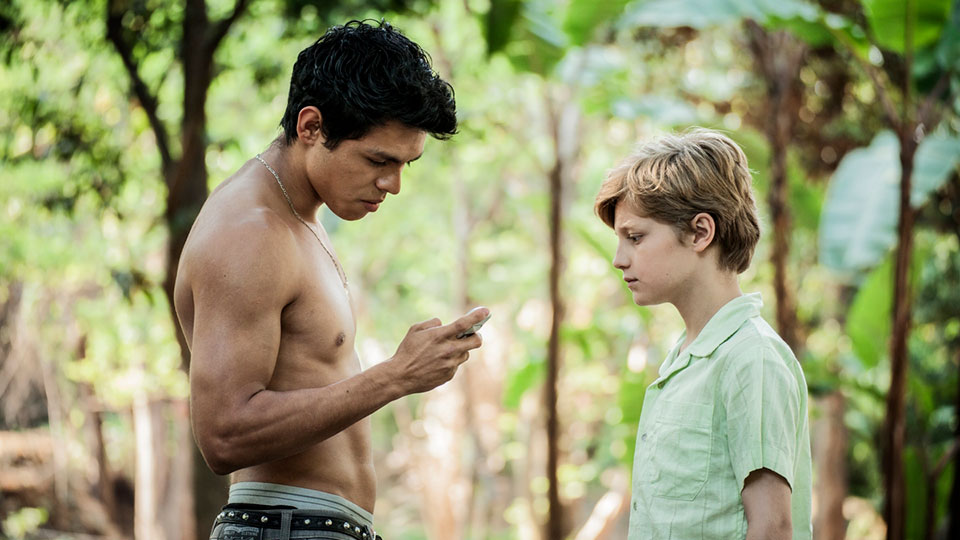 Andy (Emilio Puente) is sent to live with his grandmother Carmen (Carmen Maura) after witnessing his mother being shot to death during a random shooting at an ice cream parlour. Feeling lost, alone and isolated, Andy struggles to bond with his stern gran, who puts him to work helping out with the family jam business. Intent on tracking down his father Andrés (Moises Arizmendi), Carmen’s son who just got released from jail, Andy bonds with the gardener Charly (Diego Alvarez Garcia) who is the only person that really gives him any attention and offers to help him.

Seeds from writer/director Alejandro Andrade is a coming-of-age drama about a boy trying to figure out his identity after the tragic and sudden loss of his mother. Thrown into a world that’s completely alien to him, and perhaps unconsciously starting to realise his own sexuality, Andy grabs on to the first sign of hope he finds and that’s hunky, and forever shirtless, gardener Charly. With Andy being so young, the relationship never threatens to turn sexual, but Andrade captures the wide-eyed innocence of Andy as he idolises his new friend, keen to impress him and not thinking twice about the illegal things he’s being encouraged to do.

Andy’s only connection to his father is an old mobile phone with a message from his on it but when it runs out of power, and he finds out it has no credit, his opportunity to find his father appears to dry up. Carmen isn’t forthcoming in helping Andy get in touch with his father and his aunt Dhaly (Dulce Dominguez), who has Down Syndrome, simply doesn’t have the information or means to assist. Charly on the other hand is happy to encourage Andy to steal in order to get what he needs.

When Andrés does eventually turn up, Andy’s hopes and dreams threaten to be dashed once again as he faces the reality of what his father is really like as opposed to the man he’d created in his head. Andrade does a superb job of capturing the way that children think and feel, and with Andy he gives you a character that you can’t help but root for. That’s helped by Emilio Puente’s performance, who is very strong in his debut role.

Seeds is an intriguing film that actually does something a little different to many other films in the LGBT genre. It’s beautifully shot and directed, and the presence of Carmen Maura definitely adds a bit of weight to the whole project. You will struggle not to get emotionally involved with Seeds and it’s a film that stands up to repeat viewings, allowing you to get more out of it each time you watch it.