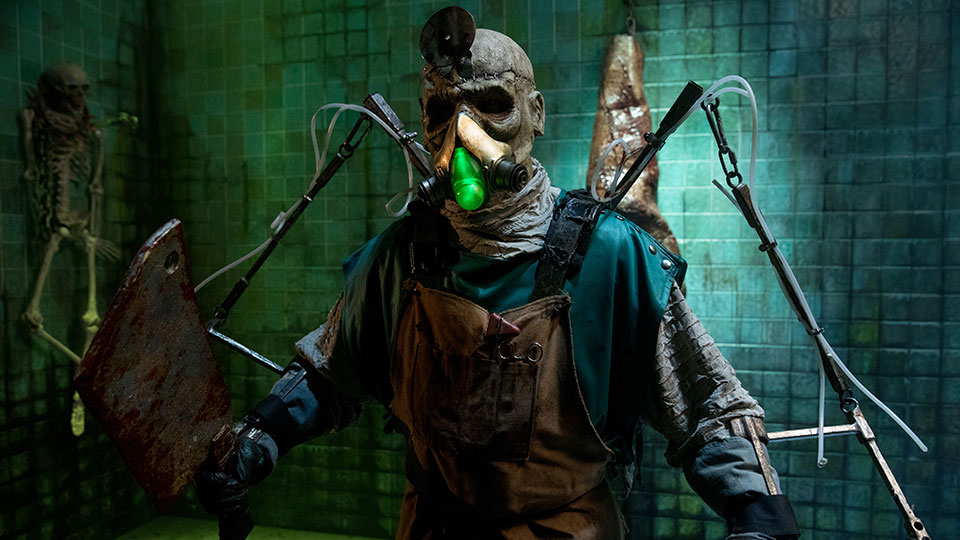 Natalie (Amy Forsyth) and her five friends decide to spend Halloween night at a local horror-themed amusement park called Hell Fest. Hoping that the night leads to romance with her almost-boyfriend Gavin (Roby Attal), Natalie throws herself into the evening but quickly starts to worry that someone in the park is following her. Sharing her concerns with her friends, they assure her it’s just part of the Hell Fest experience but it soon turns out that she was right to be worried when the masked figure comes after all of them.

As someone who is a horror buff but actually hates these kind of scare attractions, Hell Fest played on my fears well. There’s something very disconcerting about teenagers being murdered in public while the other attraction goers think it’s all part of the show. This film definitely took me back to the iconic Scream 2 opening sequence where Jada Pinkett Smith gets slaughtered in the middle of a packed cinema screening. Much of Hell Fest relies on set-pieces, as most horrors do, and there’s little to fault there. There are some great deaths, some very inventive sequences, and more jump scares than you might expect.

While the cast all do decent jobs, there’s not much really to remember any of them by. Amy Forsyth plays the obvious final girl, Bex Taylor-Klaus is the loud-mouthed cocky friend that’s probably going to die, Brooke is the feisty and beautiful best-friend… etc etc. The guys in the film – Christian James, Matt Mercurio, Roby Attal – are there purely for the guy candy element and out of the six, you can probably predict who makes it and who doesn’t. There’s a nice little role for genre favourite Tony Todd too!

Hell Fest sets itself up to be a franchise and there’s no reason that couldn’t be the case. The killer is enigmatic (and the final scene is creepy as hell) and it plays with the usual horror tropes in a satisfying and entertaining way. With plenty of effective set-pieces and plenty of gore, Hell Fest is everything you’d want from a horror movie that’s taken its inspiration from the 80s. Is it the most sophisticated and clever horror? No it’s not but it’s a damn fun ride.