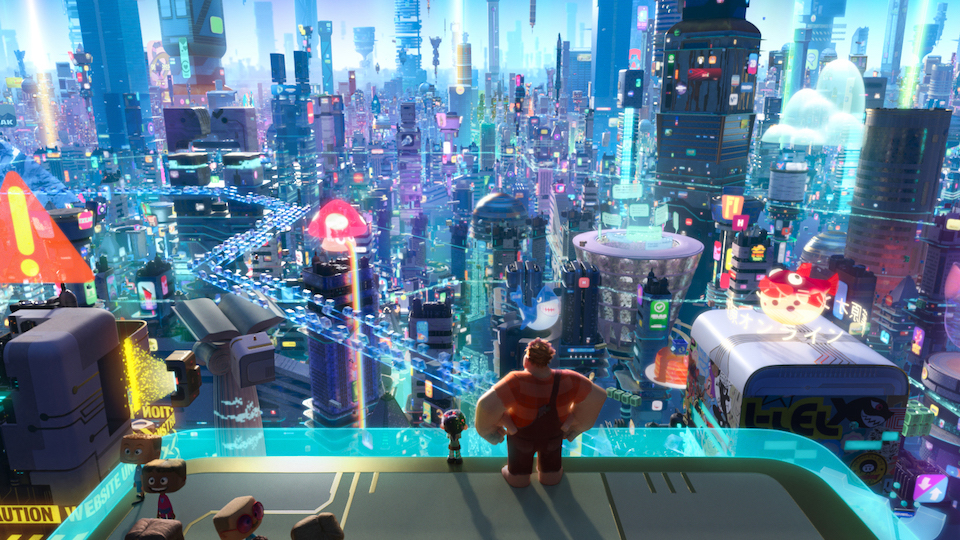 With a little more bravery, Ralph Breaks the Internet could have found itself being spoken about in the same breath as Toy Story. Not content with just being a flashy and fun animated adventure for kids, the film touches on some incredibly weighty themes. Characters have existential crises, an entire games worth of characters find themselves displaced and homeless, and the film also asks questions about the very nature and conflict at the heart of friendship. But unlike Toy Story (and its sequels) Ralph Breaks the Internet pulls its punches at the critical moments, and subsequently falls just shy of being something really special.

Which is not to say it isn’t a triumph, because visually and conceptually it is absolutely stunning. The story picks up in real time, six years since the adventures of Wreck it Ralph. Ralph (John C. Reilly) and Vanellope (Sarah Silverman) are best friends and spend every night hanging out once the arcade closes. This is bliss for Ralph, but Vanellope begins to wonder if there is more to life than just hanging around.

She soon discovers there is, when she and Ralph take a trip into the internet (through the arcade’s WiFi router) to try and buy a replacement steering wheel for her arcade game before it is consigned to the scrap heap. These two small-town arcade characters find themselves on an adventure in the big city of the world wide web, where anything and everything can happen.

The visual and auditory representation of the internet is incredible. It is a jaw-dropping spectacle of inventiveness. There’s more going on in every single frame than you could ever possibly take in. Ralph and Vanellope journey across cyberspace, stopping off at eBay for a bit of shopping, get distracted by popup spam, go down the rabbit hole of viral videos, and even make the terrible mistake of wandering into the comments section.

The pace begins to drag in the middle, and too much time is spent in Slaughter Race, an online Grand Theft Auto style racing game. However, there are a couple of amazing race sequences which further emphasise the outstanding animation and visual effects. There’s a further sequence where they find themselves in the pop culture part of the internet, which in all honesty becomes a little bit reference heavy, but it’s still a lot of fun. The sequence with Vanellope meeting all the Disney princesses in the Oh My Disney website is brilliantly funny.

Ralph Breaks the Internet is a witty and irreverent film, and does a fine job of satirizing our online lives, the inane vacuity of meme culture, and the desperation of wanting to “go viral.” Along with the more nuanced character work, and the attempt to tackle some much more thematically interesting material, I think it’s a more satisfying film than the original.

Kids will be blown away by the madcap and colourful action, whilst adults will find plenty to amuse them with the wry observations of how we exist and interact online. However, whilst the film is funny, it’s not consistently so. With a few more jokes, and a more focused script willing to properly explore the themes of its premise, Ralph Breaks the Internet could have been incredible. As it stands, it’ll have to settle for just being very good.

The blu-ray disc for this release comes with a terrific selection of special features. First up is Surfing for Easter Eggs, which is a cool little short that points out a few of the many hundreds of hidden references in the film. It nearly gives Ready Player One a run for its money.

Movie music nerds will delight at The Music of Ralph Breaks the Internet. This 10-minute behind the scenes look at the how they created a symphonic sound to perfectly represent the internet is really interesting. Next up is BuzzzTube Cats, which is a brief montage of clips that Disney animators made, which are of course based on the internet’s favourite thing of all time: cat vids.

How We Broke the Internet is the main making of documentary about the film, broken up into a number of short featurettes. Lots of interviews and insight into the conceptualisation of Ralph Breaks the Internet. Well worth your time. There are five deleted scenes, and a couple of music videos – one from Imagine Dragons and one from Julia Michaels.