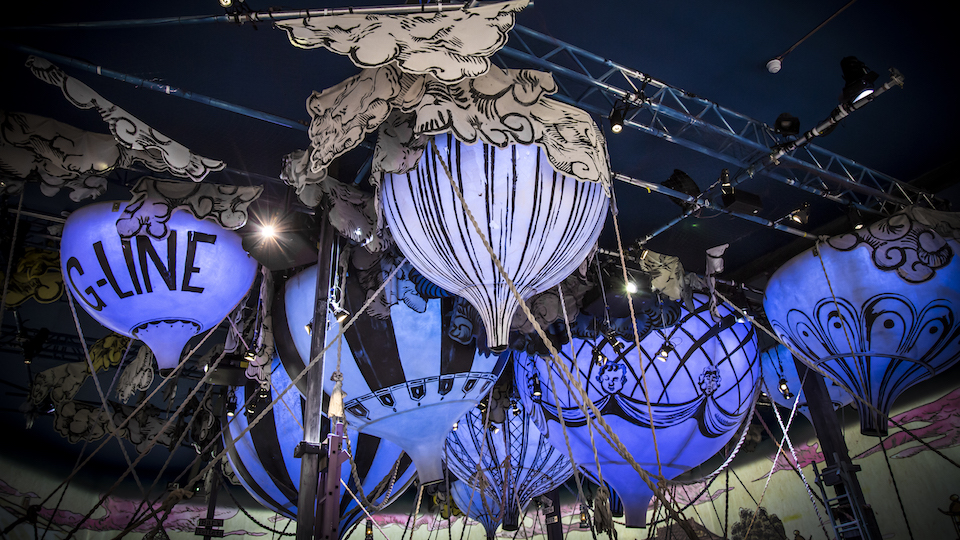 The Grand Expedition is an ‘edible journey’ in a purpose built theatre-cum-dining space during which performers will guide you through a five course meal ‘among the clouds’ at a secret location. The venue shows off near 360 degree projected animations that fill your vision to help create an atmosphere of aeronautic exploration for The Grand Expedition. Entertainment while you eat isn’t a new idea, of course, but call it ‘immersive dining’ and everyone’s appetite is suddenly whetted. It’s difficult to plan for the evening as guests are only informed of the secret location – somewhere along the Victoria Line – before 4pm on the date of their booking. Thanks to easy-to-follow instructions delivered by 3.30pm, we arrived in time for 7pm and anticipation builds. In groups of eight you are welcomed inside by two mime artists who immediately thrust a complimentary beer (or soft alternative if desired) into our hands.

Organisers instruct that we’re sworn to secrecy regards details of the food served or the entertainment offered – we’re even urged not to post any photos online. The opposite of the social media junkie mindset! That can only be a positive. As such, though, it’s difficult to honestly convey the full experience.

The company Gingerline is the brainchild of Suzannah Mountfort and Kerry Adamson, established eight years ago when devising fun ways to approach a supper club amongst friends. Suzannah explains that her inspiration for The Grand Expedition was ‘the most analogue of pastimes: pop-up books and bedtime stories, the tales they tell and the dreams they can induce. It’s designed for grown-ups but inspired by the adventures we dreamed of having as children.’  The costumes have been given careful thought, the set design’s undeniably impressive, and I fully appreciate it must have been a huge task to co-ordinate this elaborate dining space alongside an imaginative menu. The evening is enjoyable but, crucially, there’s no storyline to grip you. We encounter a fusion of live animation and energetic, friendly dancers-cum-waiting staff who aim to share their enthusiasm with bemused diners. For each course our table of eight were handed two postcard-sized menus, encouraged to read them aloud in turn so fellow members of your party can learn what’s on the table. The dishes are pleasant and inventively presented yet, it’s harsh to say it but nothing on the menu’s an unmissable treat for the tastebuds. The food’s more than satisfactory, and presented with enthusiastic spirit. Unlike the supposed storytelling. It’s somewhat disappointing as, on arrival, you’re keen to be truly captivated in the way the surroundings would have you believe you should. Most of our fellow diners continued their private conversations throughout all five courses. The animations grabbed fleeting attention because any hint of a story was scant, and minds easily drifted back to everyday conversation. Moments of poetry delivered by a voiceover narration were muffled. It was only due to the genuine trick-of-the-mind feeling of buoyancy, as we ‘travelled’ to different destinations as the surrounding animation whipped around our hot air balloons, that made the experience briefly convincingly three-dimensional.

The inherent problem with The Grand Expedition is that it doesn’t quite know if drama or dining’s the focus. The food seemed to take priority yet it felt rude to ignore the dancers as they gave it their all. That’s when they did appear as, for large portions of the evening (incidentally, there were plenty of portions to go around – quite literally – as you awkwardly pass plates and servings between yourselves), we witnessed zero entertainment happening around our particular booth. Meanwhile, other tables were invited to join in with childish games or encouraged to dance alongside the performers but the interaction seemed hit and miss. The mood subsequently left you uncertain as to where your attention should be fixed and, as such, it’s difficult to truly relax or feel involved. It’s certainly an unusual night out. Billed as a ‘once in a lifetime’ event presumably because you wouldn’t want to attend this twice in exchange for the price of the ticket plus expensive alcohol pairings to complement the cuisine. The popularity of the event, however, speaks for itself with tickets now booking in June 2019 as the earliest date available. Perhaps previous incarnations of The Gingerline’s dining experiences have been far better quality but I feel there’s a touch of the Emperor’s New Clothes about The Grand Expedition.

In this article:Immersive dining, The Gingerline, The Grand Expedition