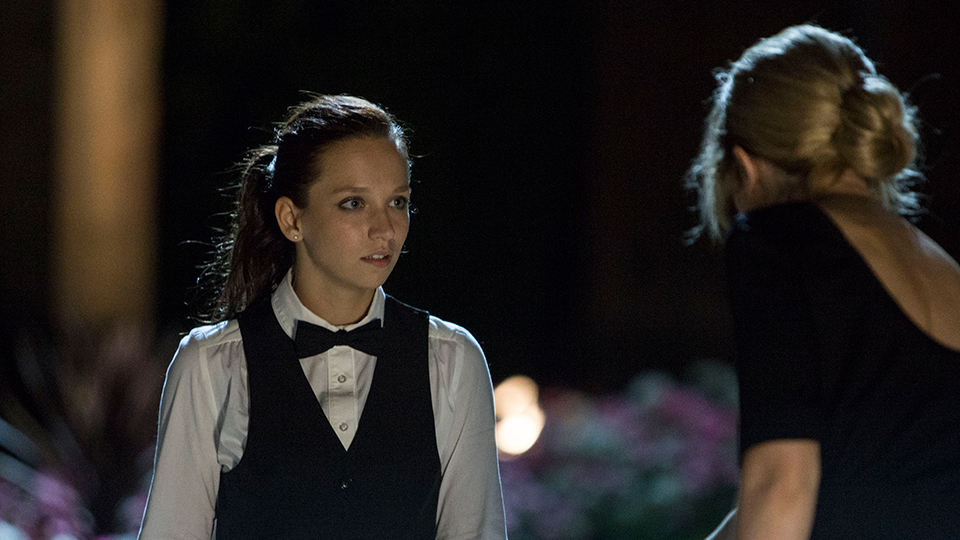 Episode 2 of Cheat aired tonight on ITV and Rose (Molly Windsor) stepped up her torment of Leah (Katherine Kelly).

Need to catch up before you read our Cheat episode 2 recap? Read our recap of episode 1.

If you want to avoid all spoilers for Cheat, stop reading this article right now.

Tonight’s episodes didn’t give us any more clues about how Adam (Tom Goodman-Hill) ends up in a body bag but it did see Rose becoming more devious as she started to interfere with Leah’s personal life. Applying more pressure on Leah, Rose set her sights on Adam determined to get him on her side.

She casually (completely planned) bumped into him at the university and spent time chatting with him in his office, suggesting that the three of them go out to clear the air. Rose then picked up a photo of Adam and Leah together, passing comment and identifying the location as a pub called The York.

Once they finished chatting, Rose plucked a yellow rose from the university grounds and left it on Leah’s desk with a note offering condolences for the death of Betsy. When Leah saw it, she picked it up along with a book and headed to the admissions office to find out what room Leah lived in.

As she arrived at Leah’s room, a cleaner was just coming out so Leah entered it. Believing she’d found Betsy’s collar, Leah started searching the room but she couldn’t find anything incriminating but she did notice that her university profile was open on Leah’s computer. While she was in there Ben (Burn Gorman) arrived so Leah hid in the bathroom until he left.

When Rose returned, she noticed a petal from the rose on her floor and realised that Leah had been there. She then opened a box from her desk drawer and unfolded a picture of Leah graduating next to her father.

Leah told Adam what she’d done and he didn’t offer her much in the way of support.

The next day Rose went for lunch with her father and it was revealed that the two barely had a relationship. He refused to help her out of her cheating scandal and Rose pointed out that he’d always been absent in her life. She then manipulated Ben (Burn Gorman) again to get photographic proof from the security cameras that Leah had been in her room.

Leah played tennis with Amy (Lara Rossi) and after the game she heard someone whispering her name while she was in the shower. She looked around for Amy and couldn’t find her so she opened her locker to get her things and get dressed. After hearing her name again, Leah left her locker unattended to investigate. When she returned her engagement ring was gone but Amy was back.

Meeting Adam after his lecture, Leah once again shared her concerns. When Adam mentioned Rose’s proposal and that she’d noticed The York in the photo of them, Leah asked how she could know that as the pub closed years earlier. Scrolling through her phone, Leah found the original picture and there in the background was Rose.

At an event at the university that evening, Leah was surprised to discover that Rose was one of the servers. She noticed a ring on her finger that looked like her missing engagement ring and a confrontation took place between the two. Leah ripped it from Rose’s finger but when she saw the engraving wasn’t on it, it seemed like she’d made a mistake but later in the episode it was revealed that Rose had indeed taken it.

Adam wasn’t impressed and rushed to Rose’s aid to make sure she was OK. The incident pushed Leah and Adam further apart, with Adam sleeping on the sofa that night. In the morning Adam found out how to contact Rose, while Leah was at the doctors, and met with her to apologise on Leah’s behalf. Rose suggested they all go to an open mic night to clear the air.

The evening came and Adam met Rose alone, having not mentioned anything to Leah, who had gone to visit her father. Adam and Rose grew closer with Rose sharing the information that her mother was dead, and the two got drunk.

Leah meanwhile discovered that her graduation photo was missing from the wall of her father’s house. He said the picture had fallen off the wall and broken the frame.

Back at the pub, Adam asked Rose to come back to the house for a nightcap. When she turned him down so she could prepare for her review with Leah the next day, he gave her money for a taxi. When he got home, Adam opened a bottle of wine and Rose began to text him. It started off fairly innocent until she suggested they sext. He asked her to go first and she sent him a topless photo. He reciprocated, after a bit of coaxing, by sending her a picture of his penis.

The following morning, Leah was sat with her bosses waiting for Rose to turn up for her review. As they waited, Leah received a message from Rose asking if the picture she was about to send looked familiar. As Rose walked into the room, she saw the sext from Adam on her phone and struggled to say anything as the review was about to begin.