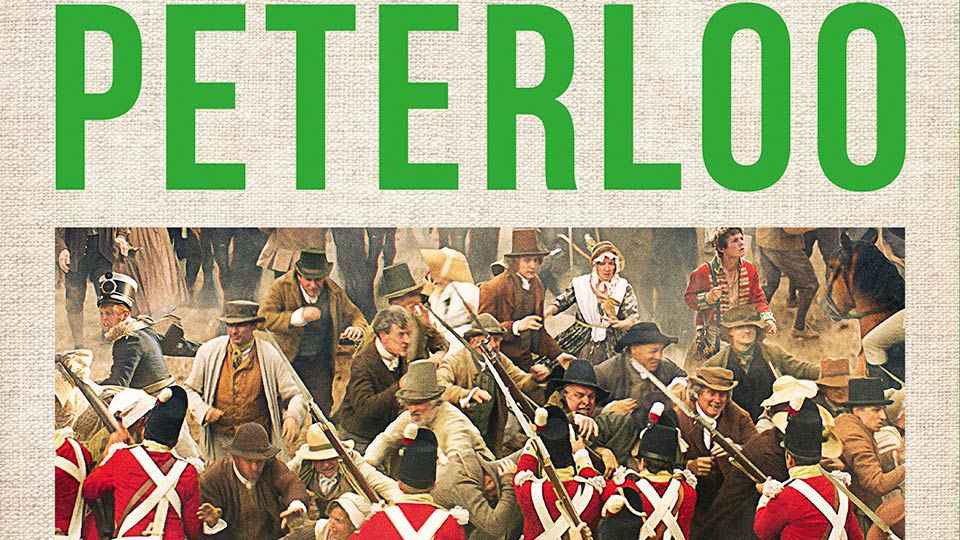 Mike Leigh’s most recent film, which has now arrived on DVD and Blu-ray, is in many respects his most ambitious. The scale and scope of the story, the period setting, action sequences and enormous cast on first glance don’t seem compatible with the director whose small-scale human dramas such as Secrets & Lies and Abigail’s Party stand as his best-known earlier works. What distinguishes Peterloo as a Mike Leigh film is the human message at its heart. Peterloo champions the cause of working class people to improve their lot in life, and does so with passion and conviction.

The story builds up to the historical event of the Peterloo Massacre in Manchester in 1819, when cavalry members of the British army broke up a peaceful political rally and protest, during the course of which fifteen people were killed and hundreds more injured. Their cause, for reform of parliamentary representation, quickly gathered pace thereafter.

In telling the story of Peterloo, Leigh focuses on the ordinary lives of a close-knit northern community. We see Joseph (David Moorst) leaving the battlefield of Waterloo, suffering from what we would now call post-traumatic stress disorder, finding his way home, left entirely to his own devices. His mother Nellie (Maxine Peake) looks after him, whilst her husband Joshua (Pierce Quigley) vents about the poor conditions for working people. Rich landowner turner spokesperson for the working classes, Henry Hunt (Rory Kinnear) is invited to give a speech in Manchester. Hunt is a prickly egotist, and providing a platform for him to speak is riddled with problems. Nevertheless, local communities from around the area plan to support the event, whilst local magistrates and the authorities panic that trouble is brewing and revolution is in the air.

Peterloo ought to be a masterpiece. There is a lot going for it, not least immaculate attention to period detail in the sets, locations and costumes. There are stellar performances from high-profile actors, particularly Rory Kinnear, who is commanding throughout. The social cause the film is built around is just and resonates with contemporary audiences as every year sees more and more political demonstrations in city centres where protests encompass everything from climate change to anti-Semitism in public life. And yet… in the final analysis, Peterloo disappoints.

Even those who may wholeheartedly agree with the social commentary Leigh is making may well find plenty of moments to wince at the awkwardness or heavy-handedness of the dialogue. The film is almost wholly devoid of subtlety, too. It is delivered as a straight depiction between good versus evil, with little grey on the palette. This wouldn’t be so bad if the performances were relatively subtle, but the main villains would not be out of place in a pantomime. Vincent Franklin as Magistrate Ethelson is the most guilty. It’s hard to remember a scenery-chewing delivery quite so jarring since the days of silent movies and moustache twiddling. Tim McInnerny, usually highly dependable, is as exaggerated as he is preposterous as the uncaring Prince Regent. Presumably they were directed to play their characters this way, but the cartoonish villainy fatally undercuts the impact of the film by undermining its credibility. It is further undermined by the large, menacing figure of police officer Nadin (played by Victor McGuire) standing in plain sight at various supposedly secret gatherings of political reformers. Plenty of other reviewers have picked up on this – but it’s too big an issue to ignore.

These problems aside, there are plenty of powerful moments in the film, and positive aspects of the production. Credit where it is due, Karl Johnson delivers a considered performance as the Home Secretary. The wider meeting of magistrates towards the end of the film finally brings a touch of nuance, and finds small but rewarding parts for some great British character actors. Robert Gillespie (Keep It In The Family) plays Magistrate Warmley, and, judging the families assembling for the rally, comments that men behave better in the presence of women. His gentle argument is not accepted, and David Bamber (Magistrate Rev Mallory) and Jeff Rawle (Magistrate Rev Hay) outshout him. They observe the shocking events unfolding below, some with mild horror, others with indifference or even righteous delight. It’s a powerful, persuasive sequence, combined with a delicious who’s who of veteran talent.

Overall, the film is too long, and the scenes are wearisomely repetitive. We go from one political rally to another, where much the same speeches are given with much the same delivery of righteous anger. Gender balance ensures that the female characters follow the example of their menfolk, further halting the pace of the film and delaying the finale in order to hammer the audience over the head with an easily-graspable point. The repetition creates a leadenness and an ennui in the viewer that even the merits of the spectacular ending can’t quite allay. It’s a great shame, because Peterloo has all the ingredients for being an important artistic work that stands the test of time. A touch too much righteous anger, hectoring to the converted and telling rather than showing skews the film in the wrong direction, risking taking sections of the audience out of the drama. Peterloo is worth seeing for the final half hour, certainly. The rest is hit and miss.

Special features on the DVD include three documentaries made during production. Life in the Detail covers the behind-the-scenes work that went into capturing the early Nineteenth Century period; From Waterloo to Peterloo is a look at filming the opening Napoleonic Wars sequences on location, and Working with Mike Leigh hears from the director himself as well as leading cast members about the process of finding their characters through improvisation.

Peterloo is available now on Digital, Blu-ray and DVD.