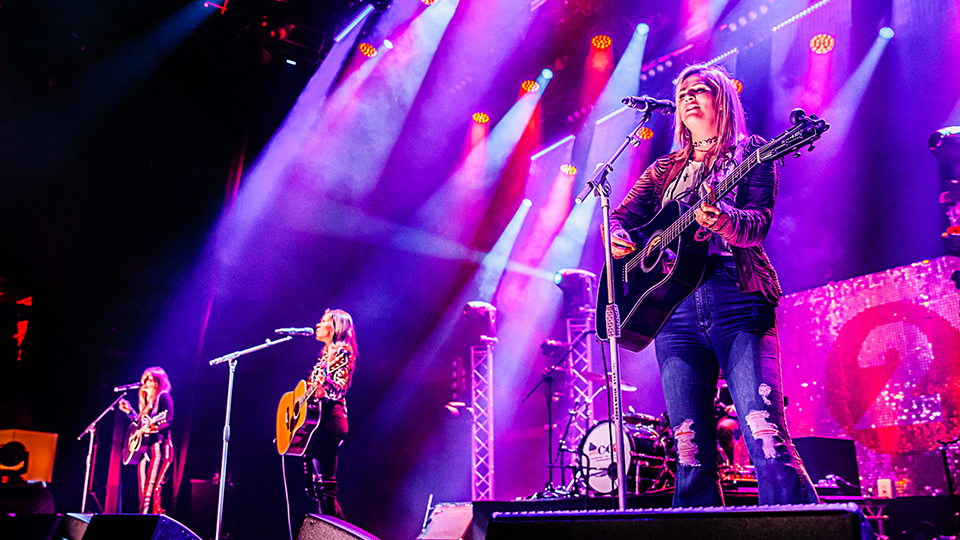 Naomi, Hannah and Jennifer – AKA Runaway June – made history when they became the first all-female trio in over a decade to earn a top 25 hit with their 2017 song Lipstick. The follow up, Buy My Own Drinks, is also climbing the US country charts and they’ve recently released their debut EP. After making their UK debut on the Spotlight Stage on Friday, yesterday they took to the BBC Radio 2 Stage at C2C Festival for a longer set.

The group arrived on stage to huge cheers from the crowd and kicked off their set with the lively, uptempo Train Whistle. Right from the start their excellent harmonies were at the forefront of the performance and stood out alongside the song’s steady rhythm and quick delivery. I liked the rocky touches they put on the track as well which showed off a different side of their sound.

Throughout their performance the band mixed their own songs alongside a few well placed covers. They got the crowd singing along to their take on Keith Urban’s Somebody Like You, and delivered a twangy, stomping rendition of Fast As You by Dwight Yoakam, with a great rock and roll feel. I also thought their energy was much better than their Spotlight Stage performance, as they could be seen moving around on stage a lot more and encouraging the crowd to join in throughout.

One thing I particularly liked was the wide range of styles the trio covered. The ballad Wild West had a dreamy feeling and a gorgeous a capella ending that showed off their sweet vocals, whilst Buy My Own Drinks had plenty of sass and swagger and an infectious poppy groove. It really highlighted their versatility and showed they’ve got plenty of variety to offer, with 90s country influences at the forefront.

For me the absolute highlight of the set was Blue Roses. Before performing the song Naomi spoke very movingly about her brother who was killed in a car accident, and dedicated the song to all those who’d lost a loved one. The song had the most gorgeous, heartbreaking imagery and an incredibly poignant feeling, and the group really brought out the pain and anguish of the lyrics. I’m not ashamed to admit it made me shed a tear, and looking round I definitely wasn’t the only one. The audience was absolutely spellbound throughout and as the song finished they burst into huge cheers.

The band closed their set with Lipstick, which for me summed up their performance with its driving rhythm and hopeful, empowering message. Naomi’s voice put me in mind of 90s Shania Twain as she belted out the lyrics and I liked the old-school country feel of the song’s bridge. The crowd was clapping along throughout and, as the girls finished the song crowding around the microphone they exploded with a roar of cheers and applause.

Overall Runaway June delivered a wide-ranging set which showed they’re just as comfortable delivering big emotional moments as they are on upbeat, poppy numbers. They’re a great blend of traditional and more modern country sounds and their harmonies are absolutely fantastic. I think they’re definitely ones to watch and can’t wait to hear more from them in future.