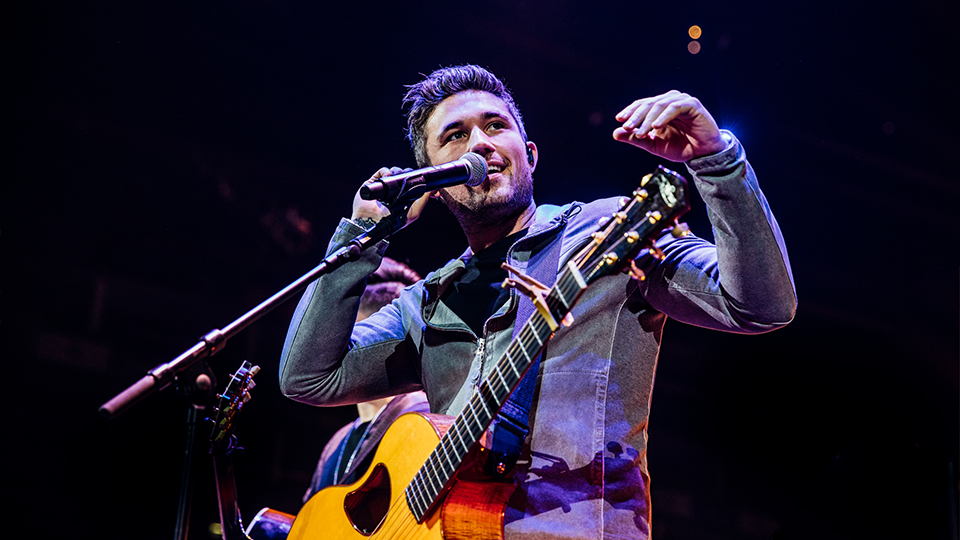 It’s been four years since Michael Ray crash-landed into the charts with his infectious debut single Kiss You in the Morning. Since then he’s been building a solid fanbase across the globe but until this weekend he’d never performed outside of the US. When Carly Pearce, Ray’s fiancée, was announced for C2C: Country to Country many fans speculated that Ray would be coming across to the UK too. That turned out to be true and he’s performing multiple times throughout the weekend.

The final act on the Spotlight Stage inside The O2 Arena last night, Ray had the job of keeping the crowd warmed up ahead of headliner Lady Antebellum. If he had any nerves or was feeling the pressure, it didn’t show during his performance. He opened confidently with Think a Little Less, his third single, and it connected instantly with the audience. The song is also the perfect showcase for Ray’s vocals. For me he’s got a traditional male Country voice and his tone is rich and distinctive; that was really showcased in an acoustic set up.

Second song Her World or Mine is an album cut from Ray’s latest record Amos. Like Think a Little Less, the song lent itself to an acoustic arrangement. It’s one of the standouts on Amos and Ray did it justice last night. Future single? I hope so!

Ray’s final song was One That Got Away, his current smash at Country radio. Built around a catchy melody, One That Got Away got the biggest reaction from the audience. Encouraging the crowd to sing-a-long (they didn’t need much encouragement), Ray kept the energy high and got everyone excited about his performance later that night at the after party.

In just three songs, Ray made a real impression with C2C goers. He’s the real deal; strong vocals, plenty of confidence and the talent to back it up. Personally I think he should have been a Main Stage artist at this year’s festival and I’m fairly certain he will be on his C2C return.