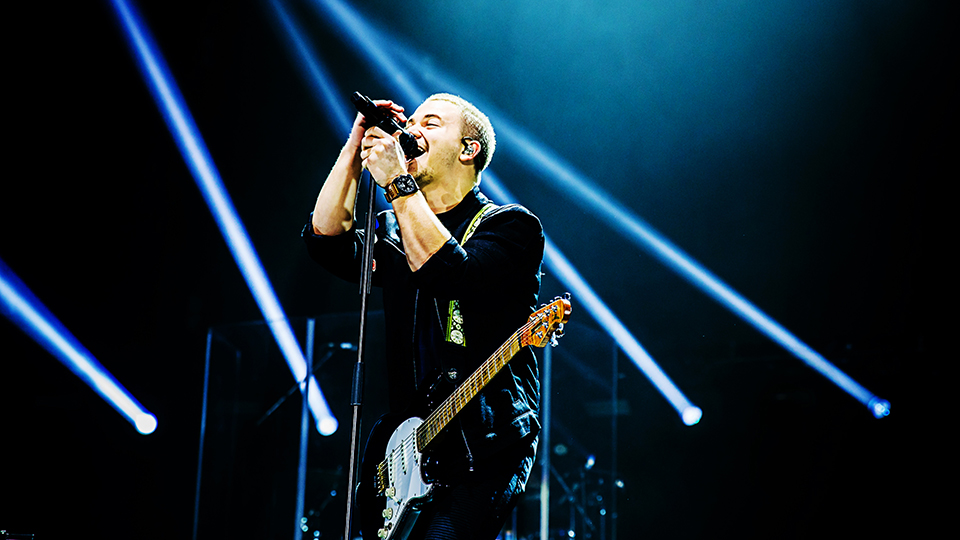 Originally from Louisiana, multi-instrumentalist, singer and songwriter Hunter Hayes first shot to fame when his single Wanted topped the country airplay charts in 2012. Since then he’s racked up five Grammy nominations, won the CMA New Artist Of The Year Award and his self-titled debut album has gone two times platinum. He first performed at C2C two years ago, and last night returned to the arena as the third act of the night ahead of Lady Antebellum’s headline show.

After a lengthy intro featuring clips of landmarks from around London, Hayes arrived on stage and encouraged the crowd to clap along as he performed recent single One Shot. It’s a pop-influenced, uptempo number that got the audience singing along and I liked the rockier spin he put on the song. He went into a run of three songs without a break, including the driving fan favourite Yesterday’s Song. This may have been due to his being unwell earlier this week and wanting to save his voice, but it was a full-on start and Hayes did his best to keep this level up throughout.

What stood out to me during the set were Hayes’ skills as a musician, particularly his guitar playing. He delivered some excellent riffs throughout, most notably between the shimmering, classic rock-influenced take on You Light Me Up and the stomping, quickfire Heartbreak, where he could be seen down on his knees on stage as his fingers flew across his silver guitar. He also had plenty of energy, leaping around the stage throughout, and there was a passion and intensity about his performance that came through very strongly. You could tell he was absolutely giving it all he had and it was very difficult not to warm to him.

However, for me the strongest parts of the show came when Hayes slowed things down. His performance of Somebody’s Heartbreak near the beginning took on a sultry groove, whilst the folky, lilting Don’t Let Me Forget saw Hayes bring out Catherine McGrath to perform the romantic ballad. After the fast-paced opening section, it was nice to see Hayes take a moment to breathe and he became visibly more relaxed on stage.

One particular standout was Invisible, which Hayes performed on keyboard, giving a very open and and honest speech about feeling like he didn’t fit in before playing the song. It was a raw and emotional rendition that showed off his talents as a songwriter, and when the crowd turned on their lights it added up to a very powerful moment. He then switched into a stripped-back take on Dear God, featuring electronic beats, which put the focus strongly on his vocals. It’s clearly a very personal song for him and by the end of it he looked completely overwhelmed (and I must confess I got a little teary too). Meanwhile, his sparse take on Wanted opened with him sitting on the stage before building into a full-on rocky sound with Hayes pushing for some huge notes, to massive cheers from the audience.

Hayes closed his set with an upbeat rendition of Tattoo, showing off funk and pop touches and giving the song a celebratory, joyful feel as well as throwing in another of his signature guitar riffs. He then followed it with Storm Warning, a 90s-influenced track which showed off quick delivery and some of his trademark soulful vocal runs. With a final fiery fast-paced guitar solo that drew on classic rock songs, the arena exploded into cheers as Hayes held his guitar aloft.

Overall I came away with mixed feelings about Hayes’ set. On the one hand, he’s an incredibly talented musician and songwriter, and you could tell he was putting everything he had into the performance. However, sadly I think his vocals weren’t quite up to the mark due to still recovering from being unwell and the show also felt very unevenly paced, particularly early on. It’s a shame as he’s clearly a strong performer on his day and I think if he’d been fully recovered it could have been a great show. Here’s hoping he comes back to the UK soon and gets to show us what he can really do.